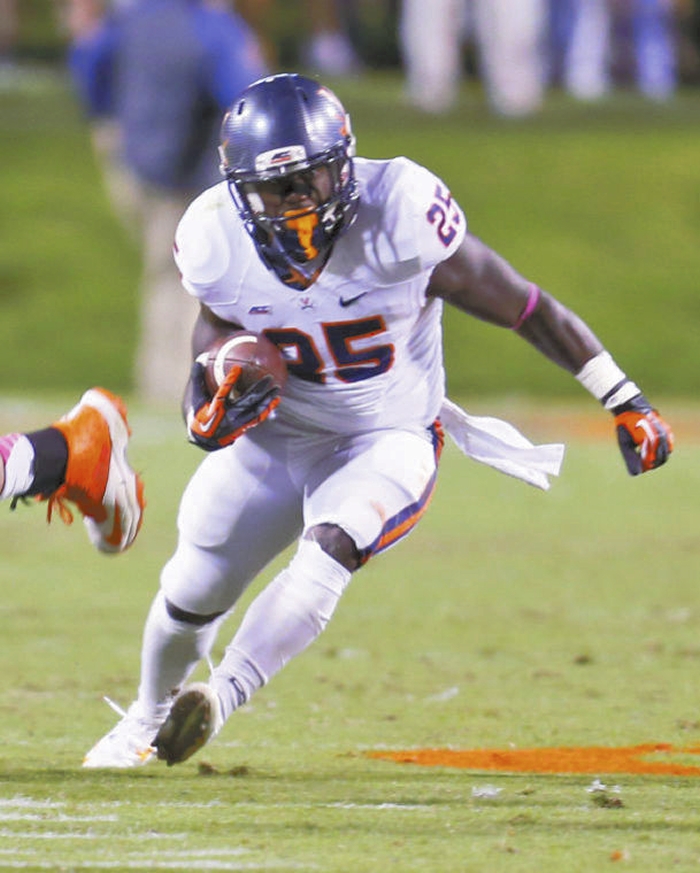 ASSOCIATED PRESS His career at Virginia over, Kevin Parks (25) is working out in Florida, in hopes of impressing NFL scouts and coaches.

There were 323 prospects invited to the annual NFL Scouting Combine in Indianapolis.

Those are the most likely guys to hear their names called when 250 or so players are selected in the NFL Draft (April 30-May 2).

Maybe former West Rowan star Kevin Parks was disappointed that he wasn’t one of those chosen 323, but his voice, checking in from Florida by phone, didn’t reveal any discouragement.

“Well, you know how it is,” Parks said. “The NFL Combine is not something I had any control over. I’m not upset.”

While Parks says his future is “in God’s hands,” his NFL dreams remain alive, and the things that are in Parks’ hands, he’s doing his best to take care of.

Parks is working out five hours a day, six days a week, at D1 of Tampa, a sports facility presided over  by Taylor Scott, a highly regarded trainer of athletes. A total of 33 NFL players have been turned out by D1 of Tampa. Parks’ agent, Wilmington-based attorney Gary Shipman, arranged the workouts with Scott.

“I attack each day and I get better each day,” Parks said. “Just grinding.”

“Every day down here, I practice the same drills I’ll be doing on Pro Day,” Parks said. “I’ll be ready to be at my best in Charlottesville. Scouts wanted me to get a little bigger and I have. I’m up to 210 now, and it’s a very solid 210. People back home wouldn’t recognize my body  now. I’ve also improved my flexibility with Yoga classes twice a week. I’d never done Yoga before. It’s made a difference.”

While Parks has bumped up his weight, he can’t change his height. He claims 5-foot-7, although most draft analysts list him at 5-foot-6. A lack of inches is one of the knocks on Parks. The other knock is the absence of blinding speed. He’s always been more about quickness than sheer speed, and his elusiveness always has been complemented by impressive power for someone his size.

Parks’ high school career at West Rowan is the stuff of legends. Search the North Carolina high school record book and there are 17 entries for Parks. His senior season for the 2009 3A state champions was stupefying — 407 carries, 3,794 yards, 59 touchdowns ‚ the greatest rushing season in state history and one of the all-time best nationally.

In a four-year career, Parks stormed for nearly 11,000 rushing yards and 158 touchdowns.

“Looking back, I was blessed,” Parks said. “Great teammates. Great coaches. I’ll always have some numbers to look at.”

It was a humbling experience for the record-setting phenom to redshirt his first year in college. Parks dressed for Virginia’s games, but they weren’t going to use him unless injuries occurred. He went to class and paid dues in practice on the scout team.

He was both liked and respected and he would become a team captain.

While Parks’ four-year college career wasn’t astounding, it was strong. He finished with 11 100-yard games and  his 3,219 rushing yards rank fifth in Virginia history. His 33 touchdowns rank sixth. Parks also caught 103 passes and is one of just four backs to make 100 receptions for the Cavaliers.

His pass-catching ability will help Parks as he moves forward. NFL teams are pass-happy, and crazy as it sounds, pass-catching and pass-blocking have become more important skills for a running back than actually running the ball.

Many draft analysts list Parks as a “change-of-pace back,” basically a third-down guy. That’s not what he’s dreamed of, but he’d be OK with that role.

Parks is confident he can turn heads at his Pro Day, but he also understands it’s likely he’ll be drafted late  — or not at all.

Parks’ good friend and former West Rowan classmate Chris Smith  debuted in the NFL last season with the Jacksonville Jaguars. Smith, who didn’t redshirt at Arkansas, got to the NFL a year ahead of his buddy, but Parks could catch up this year. At the very least, Parks will be a guy who signs after the draft as a free agent and heads to a camp with a chance to impress a coaching staff.

Off the field, Parks has done well. He completed work on his anthropology degree last semester and plans to be part of the graduation walk at Charlottesville in May.

“Anthropology is just something I liked and got interested in,” Parks said. “You need something to fall back on.”

He just doesn’t want to fall back on anthropology anytime soon.