Stan Welch: “God did that” 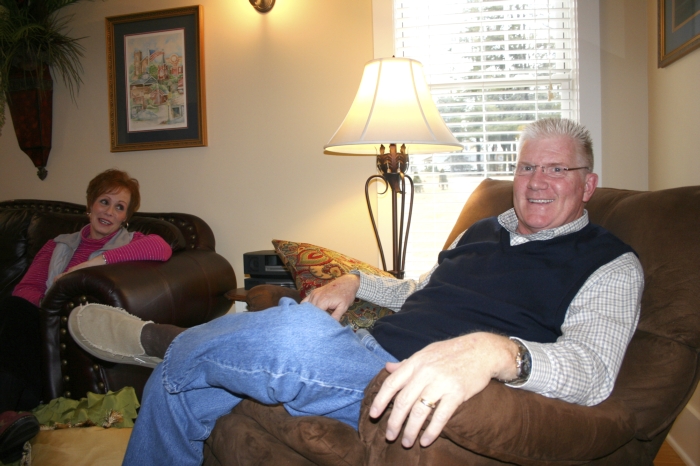 The Rev. Stan Welch and wife, Melody, were humbled by the many people who prayed for them during Welch’s brain surgery in December.

CANDLER — The Rev. Stan Welch was a little nervous on Sunday, Feb. 8.

After emergency brain surgery a couple of months ago, he knows something about that.

Stan has served at West Asheville for nearly eight years. Before that, he was senior pastor of Blackwelder Park Baptist Church in Kannapolis for 23 years. He also served eight years on the Rowan-Salisbury School System Board of Education, three as chairman, and one year as president of the North Carolina Baptist State Convention. He’s well known in Rowan County and across the state.

On Nov. 30, Stan was sitting at the kitchen table paying bills. Wife Melody asked him a question, and his answer was unintelligible.

“Now, slow down,” Melody told him, and that’s the last thing he remembers.

Melody, 56, thought her husband was having a stroke. She knew he couldn’t understand anything she was saying. She called 911, and then called their three sons.

She’d just spoken with youngest son John, 25, a nurse with the VA Hospital in Salisbury, so she simply hit redial on the way to the hospital. She then called their other two sons, Jamey, 35, and Josh, 34, who immediately began texting one another. Jamey works with UPS, and Josh is minister for music and youth at Blackwelder Park.

“Road trip?” John texted his two older brothers. They met at Josh’s house because it was a central location, and hit the road. Along the way, they talked about how bad things might be.

“He’s so stalwart, somebody so reliable,” Jamey says. “He’s been there for so many people.”

“He’s never been on that side of the bed,” John says.

When their father suffered a seizure on the way to the hospital, John knew it wasn’t a stroke.

“That meant there was something in there,” he says.

The whole week Stan spent in the hospital, Jamey kept waiting for his daddy to come around the corner, wearing his usual sweater vest, khakis and loafers.

“He’s so central to our family,” Jamey says.

The Welches married when Stan was 19 and Melody was 18.

“He was so young when we were coming along,” Jamey says. “He grew up poor, and he always said he wanted us to have better than what he had.”

“He’s the metronome of our family,” Jamey adds. “He sets the pace.”

It was hard seeing their dad hooked up to all sorts of tubes and machines, Josh says.

John, meanwhile, was in work mode.

“I went through nursing school at that hospital,” he says. “I saw lots of friendly faces. I was trying to make sense of what was going on. Instead of it being another day at the office, it was THE day at the office.”

“That sounds really good,” Josh says, and the brothers laugh, sharing the easy camaraderie of siblings.

Doctors were telling the family they couldn’t confirm what was going on in their father’s brain — it was either an abscess or a tumor. An MRI was scheduled for the following morning. Tests proved inconclusive, and the neurosurgeon decided surgery was the best course of action.

“We knew we had people we had to call to tell to pray,” she says.

Family and friends mobilized. The call went out to some 84 churches in the Buncombe County Baptist Association. There were some three dozen church members at the hospital. Before Stan went into surgery, those church members stopped his stretcher.

“We’re going to have a word of prayer,” they told the nurses.

“I trained them well,” Stan says.

Close to the three-hour mark, the surgeon came into the packed waiting room. Melody thought it was good he didn’t take the family into a separate room. He had good news and bad news.

The good news was that the problem was indeed an abscess, but the bad news was that Stan had tested positive for a bacteria that was hard to kill. He had a rare infection in his brain tissue.

“It was a freak occurrence,” John says.

“It means it couldn’t be killed with normal antibiotics,” says Jamey, who was a biology major in college.

Even though only one person at a time is allowed in ICU, the family was all there when Stan returned to the room.

“We were all in a corner of the room,” she says. “It was like the choir, is what it looked like.”

They couldn’t believe what they saw.

“Oh my gosh,” Melody said, talking out of the side of her mouth. “Do NOT mention his hair.”

Stan’s hair is strawberry blond, now tinged with white. He has a lot of hair, and he’s proud of it, styling with a round brush when he dries it, according to Josh’s wife, Katie.

Now it was gone. But Stan was awake and alert.

He kept asking, “Where am I?” and the nurses answered “Mission Hospital.”

Melody finally realized what he was asking.

Stan had been to that hospital many times on visits.

“He knew something was bad,” Josh says.

Over the next few days, Stan’s mind started to clear. He entered the hospital on a Sunday night, and was released the next Sunday at noon.

The boys went and had their heads shaved, too.

Stan remembers sitting at the table paying bills, but doesn’t remember anything else until he woke up in ICU, and found the surgeon smiling  down at him.

Staff members from church had visited him, and told him not to worry about anything.

“They reassured me that everything was taken care of,” Stan says.

So he didn’t. But he faced more of a recovery than he realized.

The first week home, Melody needed help printing something on the computer, which is located upstairs in their Candler home. Stan decided to walk upstairs and help. By the time he got to the top of the steps, his heart was racing.

“I realized I was weaker than I thought,” he says.

“The Lord just took care of that,” he says.

Stan says he was humbled to receive so many prayers.

His healing, he says, “was a direct answer to a specific prayer. God did that. It grew our members’ faith as well as mine.”

Stan can’t drive for several more months, and relies on Melody to take him to work, and good friends like Coy Mehaffey to bring him home.

On Feb. 1, Stan visited church just to thank everyone.

“We gave him a standing ovation,” Coy says. “All of us just broke down because we were looking at a miracle.”

Stan began to regain his strength, and decided to preach Feb. 8.

He says his experience has not changed his life but rather solidified his faith.

“We never know what will happen,” Stan says. “I may die today, but the Lord owes me nothing. I’ve lived a full life. I have no regrets. But I had no fear, no thought of dying.”

He feels good now, but had to have a lot of rest and quiet time when he first got home.

“When they opened up my brain, it sort of reset my senses,” he says. “Sounds were louder, lights were brighter, and my taste was affected.”

It’s a good thing he does feel better. The boys and their families spent Valentine’s weekend at home, something they’d not been able to do since Thanksgiving 2013, Katie says. That included Josh and Katie, 33, and their three children, Will, 6, Reece, 2, and Whit, 10 months; John and wife Taylor, 23; and Jamey and Melissa, 38, and his children, Gabe, 17, and Caroline, 12.

Stan and Melody kept Reese and Whit while everyone else went tubing at Moonshine Mountain on Friday.

Coy, 88, joined the crowd for dinner on Saturday night. Stan had fixed chicken and steaks on the grill, with his boys “supervising.” Melody pulled out a huge pile of baked potatoes from the oven, and everyone fixed their own salad. Melody’s birthday was earlier in the week and Josh and Katie brought her a cake from the Party House in Kannapolis, her favorite bakery.

“Oh! I fell in love with him the first time I met him,” Coy says of Stan, and Coy’s wife Clara and Melody also hit it off. Clara and Coy were married 64 years before her death in August and since then, Stan and Melody have kinda taken Coy under their wing.

Coy and Clara had no children.

Coy surveys this house full of people. Gabe is swinging Reese in the living room, and Taylor is sitting with Whit on her lap. Others are finishing dessert and chatting in the dining room, and the boys are kidding one another as usual.

“They are my family,” Coy says.