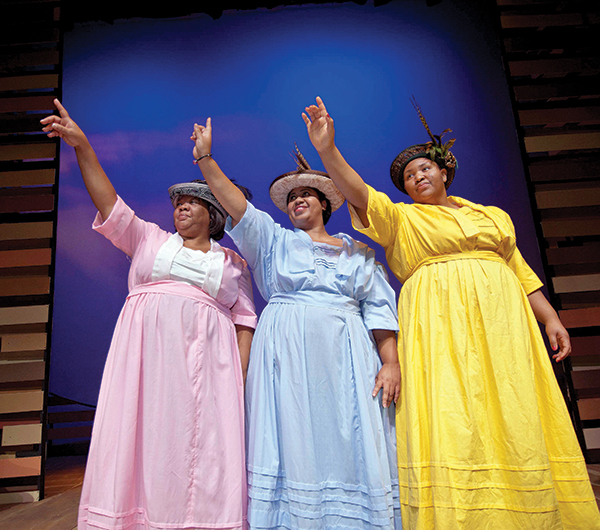 Spirit of Rowan: The show goes on

Theater in Salisbury has a long tradition, dating back at least to the Thespian Society in 1812. The great actress Sarah Bernhardt, known as “the Divine Sarah,” performed at the Meroney Theatre during the height of her popularity.

Now, theater is not just on occasional thing, with productions at Catawba College and Piedmont Players Theater. Theater is bursting out all over Rowan County, from high school productions to a new readers’ theater for senior citizens.

Catawba has played a starring role for careers in the theater, movies, television and more. It’s often the connection among diverse groups.

Reid Leonard, director of Piedmont Players, is a graduate of Catawba College. A generation later, Justin Dionne, the managing director of Lee Street Theatre, is also a graduate. Dionne praises the help of Catawba interns for making so many parts of production happen.

All the players in local performance venues agree the key to a sunny future is in communication and cooperation.

Christopher Zink, chairman of the theater arts department at Catawba College, says everything changes as people come and go, but the big thing now is some sense of competition for audience and resources, but “collaboration is a natural outgrowth from that. It seems if we can work together in various ways, we can come out with a better product and a better audience.”

Last fall, Catawba College collaborated with Lee Street Theatre on a production of “Rent” that played at both venues.

Piedmont Players collaborated with the Salisbury Symphony to do “Les Miserables,” performed in Keppel Auditorium on Catawba’s campus.

St. Thomas Players, a feature of the Center for Faith & the Arts, has performed its plays both at Catawba and Lee Street, and is now expanding its season and its theater encounters.

Jenny Hubbard, who manages St. Thomas Players, is excited about a new venture, The Phoenix Readers, a group of senior actors who will perform readers’ theater. Jim Epperson, who retired from teaching theater at Catawba, will direct.

There’s at least one man who’s been around for the evolution of local theater, Ed Brown, a founding member of Piedmont Players and a patron of both PPT and the Blue Masque at Catawba. Brown attends all PPT, some at Catawba and some at Lee Street. He’s seen theater all over the world, especially in the heyday of Broadway.

He remembers the creation of PPT. “Our hope was to form a group to have some nice plays, a broad spectrum.” Catawba had its Blue Masque group, and “they could do experimental plays and Shakespeare for training,” and the community was very fond of those, Brown said. Piedmont Players was “not Shakespeare. We did Neil Simon and lighter comedies people would come out for to enliven the scene.”

Brown remembers the procession of directors at Piedmont Players, which included Catawba professors. At the beginning, the group had no place to perform, so they used church halls for rehearsals and made scenery in what is now the Messinger Room. “We had to get the flats out through the fire escape outside.”

Eventually, they were able to use the stages at Catawba, but that presented a problem. The school’s productions had to fit in the academic schedule.

Brown is a huge fan of the musical “Chicago,” and saw Bebe Neuwirth in it. He was thrilled when Piedmont Players decided to do the show.

He saw both “Rent” and “Les Miserables,” though “Rent” is not really his kind of play. ” ‘Les Miz’ was fantastic here.” Reid Leonard and David Hagy decided to do a scaled down production, without full staging. “It was good as anything I’ve seen. The music was spectacular. The collaboration between the symphony and Piedmont was excellent.

“We’ve got quite a lot of talent here.”

Leonard had joked about doing the musical with Fred Inkley, another Catawba graduate who played Jean Valjean on Broadway, but it was too big for Piedmont, too expensive, until he and Hagy began to talk about it. Scaling back “was a viable way to do the show,” Leonard says, although working with Hagy’s schedule was another hurdle.

Leonard says all the theater groups each bring one thing to the table, and “then they make another.”

St. Thomas Players, part of the Center for Faith & the Arts, is trying to do more productions and uses the Lee Street Theatre space. Brown has enjoyed the thought-provoking works St. Thomas has presented.

Brown says, “We’ve upgraded the types of plays and subject matter has become more contemporary. The choice of setting and the choice of actors for the plays has enlarged. It has increased variety and the reputation of the theater” here.

Brown, Zink, Leonard and Dionne all say the one problem is getting all the productions lined up so there’s less overlap. “We don’t have a scheduling device for any fundraisers, like the Oyster Roast,” Brown said. “We don’t have a central clearing ground that includes all that and the symphony. I think we need something like that so we can get it worked out.

The tourist bureau would be an ideal clearing place for that, Brown says. “They could do the Friday night deals and holiday events, that would be an ideal solution, and for the big fundraisers and other things like that.”

Brown points out that there are limits to scheduling performances, even though venues abound, including the Norvell, which is usually used for children’s theater productions. “That’s a good space,” Brown says.

“Working together is the wave of the future,” Brown says. “It broadens the scope of what can be brought to the community.”

Zink says Catawba has been in talks with other groups about collaborating. “We’re at the point where we’re trying to do one collaboration a year. I think you’re going to see more in the way of collaboration.”

Having students involved in PPT or Lee Street is a little worrisome, but beneficial in the end. “They have to be committed to classes and their work at the college, but so many students need employment outside school to be able to afford it.” It gives students more experience, which will be a plus when they are looking for jobs in the theater.

With events such as “The Polar Express” and the “Nutcracker,” going on at the same time, Zink says it was a pull on Catawba resources, “but it opened up opportunities for other students.”

Dionne, managing director of Lee Street, says when he and his board did a review of the past year, he found out Lee Street has collaborated with 15 different entities, ranging from the N.C. Transportation Museum to the Choral Society to Catawba and St. Thomas Players.

“We made that part of our mission statement and values. … If we don’t collaborate, they need to fire me. I said this is how we’re going to survive. Theater is a much bigger deal in this community, as it is everywhere now.” Audiences are coming back. Dionne is excited that many parts of the community that never set foot inside a theater have come to Lee Street for concerts or cabaret-style shows. “That’s theater, too,” he says.

Dionne sees Lee Street finding a balance that becomes its niche. “We don’t have to do just theater. We’re doing other things and that helps us a lot.”

Dionne likes the cross-pollination, “I want actors to be part of all the venues in town.” He sees the varied offerings as part of a creative economy that can support performers, artists and others in the community.

“We want to create and encourage more creative people to want to be here. Now they’ve got more opportunity for that.”

Seeing what other groups are doing “drives us all to work harder and do better and have an artistic theater experience.”

Zink is excited because Catawba graduates are such a big part of the picture. “That’s one of the things generations and former faculty should be proud of. If you look at most theater” here, there are “lots of connections. It says good things about what we’re trying to do.”

Price of Freedom founder Bobby Mault: ‘Everybody knew I was a runner’

CHINA GROVE — Mary Smith pulled up to Bobby Mault’s service station, and it was a matter of seconds before... read more