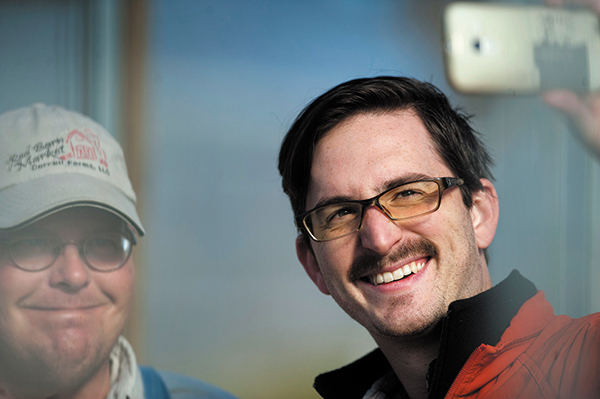 The faces of the farmer and the consumer are changing in Rowan County. Following the national trend to eat local, fresh foods, area residents have supported a small farmers market and a food advocacy group, Bread Riot.

In 2014, the Salisbury Farmers Market and Bread Riot realized that to survive and thrive, they both needed help.

The joint plan was to hire someone — for Bread Riot, the first paid position ever — who could benefit both groups. The Farmers Market needed a manager, since Harry Agner retired at the end of the 2014 season. Bread Riot, which has been a 100 percent volunteer group, needed an executive director.

Together they decided on Eric Bowen, whose experiment in Internet-ordered, home-delivered local food caught their attention. The job description caught Bowen’s attention, too. The positions fit in with his interests and education.

With farmers on both sides of his family and a deep desire to educate and serve the public, Bowen switched his college major from engineering to natural resources and found out on a soil tour of Europe how fascinating dirt is. He learned how soil affects the products of the land, and had an Aha! moment in looking at glacial deposit soil, which shows the layers that have stacked up as glaciers move across the land.

“It changes the way you think about the whole world. It was just dirt before then, then it became soil.”

He studied ecology at N.C. State University and learned about the Center for Environmental Systems, leading him to a farm where he worked on the land and taught children about plants, compost and soil. “I’m a soil man,” he laughs.

He then worked at a natural resources ecology lab in Colorado where he learned more about how species interact.

He found he was more interested in education and nonprofit work than farming for a living. And that’s what made him attractive to Bread Riot and the Salisbury Farmers Market.

“He was very passionate and energetic about local food in general and he had lots of experience,” said Amy Poirier, president of Bread Riot.

“I’m looking forward to working with him. I think he’s really qualified and I hope this benefits both parties,” said Mike Turco, president of the Farmers Market board. Both Poirier and Turco were in on Bowen’s interviews. Turco’s wife, Kristine, is a vendor of baked goods at the market.

One of the things that attracted Poirier and Turco was Bowen’s success with Gomarket, an Internet site in the Triangle that took orders from consumers and delivered food from various farms around the area.

Bowen could not find anyone who wanted to take on the project and had to shut it down when he accepted the job here.

It gave him experience in using the Internet to promote and procure local foods, a plus for this area.

Turco said the Salisbury Farmers Market has signed a one-year contract with Bread Riot to hire Bowen as manager.

One problem the Farmers Market has is an aging customer base. Many of the regulars are retired or have already raised families.

Bowen, who has a young daughter, understands how busy young families are. They don’t want to spend time shopping — they want to be out hiking. That’s where some sort of delivery might come in handy.

“We’re kind of reaching the glass ceiling of what farmers markets can do,” Bowen said. “We’ve got to figure out where to go next.”

Summer is the peak farmers market season, and changing to daylight saving time is crucial, Bowen said. Somehow, he’d like to extend that.

He’s concerned about a location for the market, and trying to return to using Electronic Benefit Transfer, which is a way to get government benefits paid to a seller electronically, and SNAP, Supplemental Nutrition Assistance Program, to give lower income people an option for fresh food.

The Farmers Market has tried to reach out to low income families, but with limited success.

As for Bread Riot “I hope (it) can be like a pilot project, that we can ask for grant money. We’ve got to pitch it and get people excited.”

Bread Riot has done everything with volunteers. That includes all their events, such as movies and discussions at Catawba College’s Center for the Environment, the big fundraiser, Riot in the Pasture, and all the Winter Harvest baskets.

Poirier says Bread Riot expects Bowen to take part in all their events and to grow some new programs, maybe establish a food hub, which is a central location to help farmers sell their goods and consumers to buy fresh, local food.

Bread Riot has discussed such a place since its inception, but has not been able to pursue it.

Bowen is intrigued by the idea of agritourism in Rowan County. “There’s a lot of great farms around, lots of great farm buildings. Maybe you could start a tour at the train station, visit a farm or two, stay at a bed and breakfast, eat local.”

Another concern is how to connect member farms with the biggest bang for their buck. “There’s lots of philanthropists here, that’s good.”

And he’s excited to bring down barriers between Bread Riot and the Salisbury Farmers Market.

“There’s a lot of similarly minded people here already, so we need to get them talking, creating social opportunities for people to come together.”

“He has potential to have good rapport not only with consumers at the Farmers Market, but with farmers, as well,” Poirier said.

“We have a lot of agriculture in this area,” she said. “We want new farmers or established farmers to enter the local food movement. … We want to convince farmers it’s lucrative for them or something new. We hope he can convey that.”

Poirier sees Bowen as inspirational. “He’s very good with his ideas and his energy makes you excited, makes you as a group and individual want to help out and participate.

Holt found his calling in bringing history to life