Holt found his calling in bringing history to life 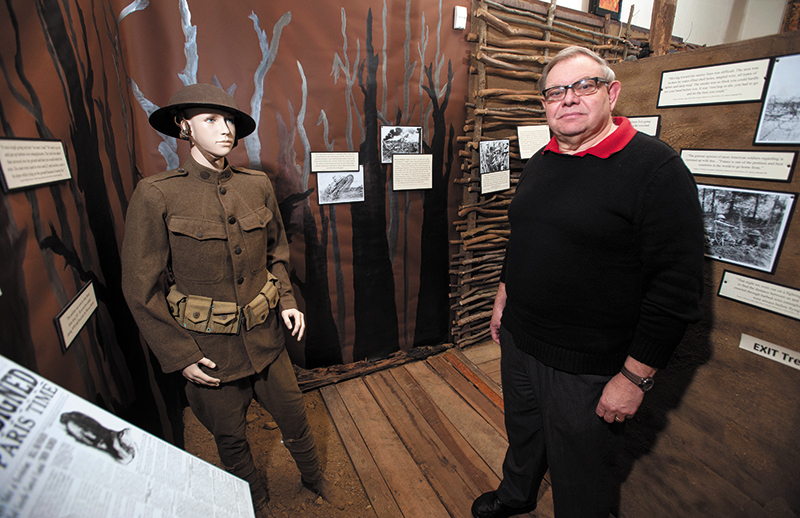 JON C. LAKEY / SALISBURY POST Retired Rowan Salisbury School history teacher continues to bring his excitement for history to the visitors to the Rowan Museum. His talent for bringing history to life has been very beneficial to the musuem by his designs for the exhibits that are built for the museum. His latest project was devoted to the Rowan County soldiers that served in World War I.

SALISBURY — As a history teacher, Terry Holt used to keep in his classroom a trunk full of costumes — period hats, coats, pants, scarves, wigs and the like — into which he and the students could reach and bring their history lessons to life.

One day, to re-enact the funeral of President Abraham Lincoln, Holt’s class turned an empty school filing cabinet onto its side to serve as Lincoln’s coffin.

They covered it in black, draped a U.S. flag over the cabinet and adorned it with the kind of tall top hat Lincoln always wore. Holt greeted his students at the door that day dressed in black, and the students’ solemn ceremony for the slain president included a dramatic reading of Walt Whitman’s “O Captain! My Captain!”

Holt thinks you have to see, taste, smell and touch history and try to put yourself back in the time periods you’re studying to get a sense of  how people were living and what challenges they were facing.

It’s probably no accident, but almost 40 of Holt’s former students are now teaching.

As a teacher, as a historian and even as a wannabe rock star, Terry Holt has always been a performer.

After retiring as a teacher and administrator in 2007, Holt could not allow his passion for history to die, and he began volunteering his considerable enthusiasm and talents to the Rowan Museum.

Today, he chairs the Rowan Museum board of directors and presides over its History Club,  He teaches several sessions of the annual Rowan County history class for adults, sponsored by Rowan Museum and Historic Salisbury Foundation.

For the present World War I exhibit at the museum, Holt and his helpers created a trench into which visitors can walk and experience what its was like for soldiers on the Western Front.

Holt wakes up in the middle of the night to jot ideas down ideas for the next one.

“Terry could have been an exhibits designer,” says Kaye Brown Hirst, executive director of Rowan Museum.

Too many kids grow up thinking history is about books, reading and memorizing dates, Hirst says, “but if you bring it to life, it makes all the difference in the world.”

She remembers an adult history class being held at Soldiers Memorial AME Zion Church when the session was on the Civil War. Dressed in period clothing, Holt emerged to go through the day’s mail call, and he read actual letters from the war.

The way Holt handled it made it dramatic and memorable, Hirst says.

When the history class reaches the 1950s and 1960s. it’s likely Holt will show up dressed in a blue prom jacket, waiting for his date.

Former students come into the museum all the time and tell Hirst how Holt made history interesting for them in their middle school or high school days. It’s still happening.

Kids who attend Rowan Museum’s weeklong summer camp about the Civil War know Holt as the official walking around in a frock coat, swearing them in as soldiers for the North or South.

Holt credits hearing his grandmother’s stories as a kid for giving him a love for history, along with several teachers he had through school. Together, they showed him that all the dead people in history books did not have to stay buried.

Holt knew as a 12-year-old  he wanted to be a teacher. He says in his last prayer at Confirmation, he and God spoke and settled on that life plan.

A “horrible” teacher actually cemented those aspirations, he says.

Holt had a teacher who embarrassed him in front of the classroom one day for not having all the answers to an assignment filled in. The same teacher later scheduled a parent conference with Holt’s parents to tell them he was not going to be promoted.

It was at that conference Holt told the instructor, in front of his parents, that he was the sorriest excuse for a teacher he had ever seen and someday he would return and take his job.

Holt says he actually missed doing what he had promised by a year. But it was that teacher’s bad example that gave him an extra drive to be a good teacher, though he will tell you he was an average student.

“When they talk about the best and brightest, I had something to say about the student who struggled,” Holt says, “because I had plenty to share.”

In school, Holt carried two notebooks — one for his class notes; the other, for his notes on the good and bad techniques he saw in teachers.

Holt graduated from South Rowan High in 1969 and went on to earn his history degree at Appalachian State University, where he fell in love and married Eunice, also a history major who had been a high school classmate of Holt’s.

For the last two years of high school and the first two years of college, Holt played keyboards in a local band called the Twilights. The large ensemble gained a reputation as one of the better bands around.

Holt recalls one weekend in which the guys left South Rowan High at Friday’s final bell and drove to Athens, Ga., where they played for a fraternity party. Saturday night and Sunday night fraternity parties followed at the University of Tennessee and the University of Virginia, respectively, and the high school band members returned in time Monday morning to change shirts in the parking lot and make their first-period classes.

The summer Holt graduated high school the Twilights were the featured band at he Pavilion in Myrtle Beach during the month of July. The Twilights soon found themselves playing warmup or backup to acts such as Lil’ Anthony and the Imperials, Benny King and Shirley and the Shirelles.

The strain of going to college while practicing and performing with the Twilights became too much, and Holt quit the band in 1973. The Twilights continued on and even locked in as the exclusive band for Jackie Wilson.

“I would never give those four years away,” Holt says.

Both Terry and Eunice, whose discipline also was history, started their teaching careers in South Boston, Va.

They bought a trailer, taught in rooms next to each other and stayed in South Boston for seven years.

For family reasons, they returned to Rowan County in 1980. Terry landed a job teaching adult basic education — a kindergarten through third-grade level of learning — to inmates at the Piedmont Correctional Institute.

Holt says his students included a triple ax murderer and a high official in the Hell’s Angels motorcycle gang.

By 1983, Holt and Eunice were teaching at Erwin Junior High School — Terry, the eighth grade; Eunice, the ninth, before Erwin became a middle school.

The Erwin students soon witnessed the many characters Holt could play in bringing them their history lessons. His roles ranged from Blackbeard, the pirate, to George Washington, father of the country.

Holt thought his students deserved the best he could give them, and he says he wanted his class to be their best hour of the day. Through history, he tried to give his students a strong sense of their heritage and show them they lived in a society worth saving.

Holt considered students coming into his classrooms as his children, too. He wasn’t so interested in the their ability to memorize dates. He thought it more important for them to put historical time periods in order, understanding the things happening in one period and how it led to the next.

The Rowan-Salisbury School System named Holt its Teacher of the Year in 1990. He also received the 1991 Terry Sanford Award, given to teachers for their creativity and innovation.

The Tar Heel Junior Historian Club, which Holt founded with another teacher, earned state club of the year recognition and Holt was co-advisor of the year for North Carolina. The club routinely made intricate models of local historic sites such as Setzer School, the Salisbury Confederate Prison, Shuping’s Mill, Kerr Mill and Salisbury trolleys.

Every year, Eunice would take her ninth-graders on field trips to Washington, D.C.

“I went along for the ride because I knew all of them,” Terry Holt says.

All the while, he was Scoutmaster of Troop 375 in China Grove from 1980 to 2005. He led a group of Scouts to the Philmont high adventure camp in New Mexico in 1990. Three of his Eagle Scouts were once serving as soldiers in Iraq at the same time, including his youngest son, Justin, now a captain in the U.S. Army.

Eunice and Terry’s older son, Ryan, is an aerospace engineer, working on the Gulfstream 650.

Holt also has been a tour guide and tour-guide trainer in the past for Historic Salisbury Foundation.

He and Eunice have driven across the United States twice and have visited every state except Hawaii.

If Holt could come back as a historic character, he says it would be as Revolutionary War Brig. Gen. Daniel Morgan, the hero of Cowpens.

Holt’s latest personal study in history has involved the Victorian period, and he makes the argument it was a time much like present day. He also has just finished three books on the history of the Lumbee Indians.

Justin’s wife, Julie, is Lumbee, “and I need to know her part of history,” Holt says.

The next Rowan Museum history exhibit already is percolating in the mind of Terry Holt.