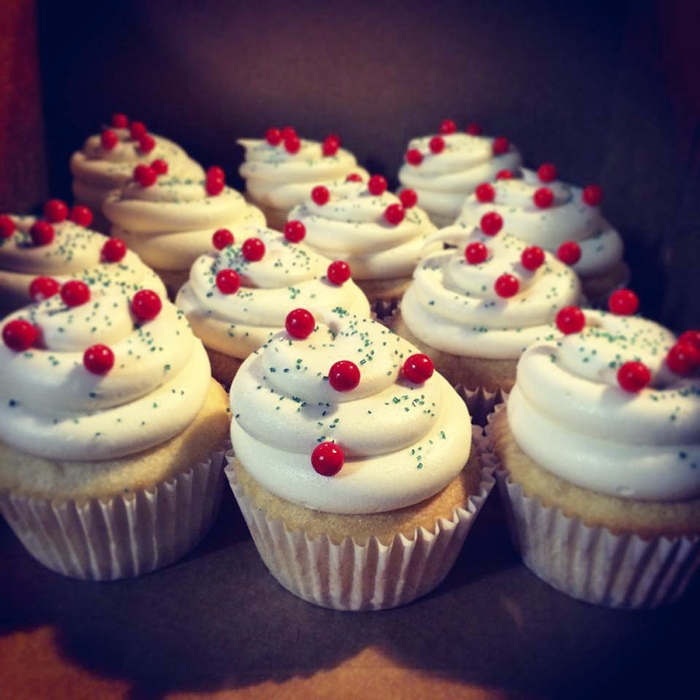 Christmas cupcakes baked and decorated by Abigail Young, who is opening a bakery, Abigail's, in downtown Salisbury in the Bernhardt Building on North Main Street. Young currently makes wedding cakes, cupcakes and cookies but said she plans to expand her selection after her bakery opens.

Downtown Salisbury is going to get a little bit sweeter this spring when a new bakery opens.

Abigail Young will be opening “Abigail’s” next to Sweet Meadow Cafe in the Bernhardt Building on North Main Street just down from the Square.

Young, who is originally from China Grove and currently lives in Kannapolis, bakes cakes, cupcakes and cookies. Her primary business is making wedding cakes — but she said she can make a cake for pretty much any occasion.

Young is 28 and grew up baking with her grandmother. She said her favorite thing to do has always been to decorate cakes. But since a cake had to be made before it could be decorated, she learned the baking side of the process too.

“I’ve always been creative,” she said while talking to a Post reporter inside the space — currently being renovated — that will house her bakery.

Young went to high school at Concord First Assembly and earned a degree in Baking and Pastry Arts from Central Piedmont Community College. As part of finishing her degree, Young did an eight-week internship, which took her to Chicago, Illinois, where she worked at a bakery called Take The Cake.

At first, Young took custom orders and did the baking and decorating from home. In mid 2013, she started leasing space in a kitchen above Cabarrus Creamery in Concord.

Last August, Young said, a friend put the idea in her head to open a bakery in Salisbury. Things snowballed from there and have fallen into place.

She said one of the reasons she decided to open a place in Salisbury is that she has a lot of clientele in the city. The location on Main Street, with plenty of foot and car traffic, was a plus too, she said.

She had been doing accounting work part time but stopped in December to focus on getting her bakery together. And baking is certainly a full-time job for Young. Last week, she said, she was in her kitchen in Concord Tuesday through Saturday from 8 a.m. to 3 p.m. each day. Normally, she’s working on multiple things at one time, she said.

Word of mouth and social media, her Facebook page is called “Abigail’s — a cake affair,” is how Young recruits customers, she said. Young talks on the phone inside what will become her bakery.

The bakery is part of a full-scale renovation of the Bernhadt Building, which was home to Bernhardt Hardware for decades. Now, the building is being re-developed for commercial and residential use by Calm Holdings LLC, co-owned by Bryan Wymbs and Chad Vriesema. The city has issued $148,155 worth of grants to help with the renovation.

Sweet Meadow Cafe opened in January after moving from its former home on West Innes Street.

The Bernhardt Building will also have apartments once all of the construction is complete. Two of the apartments have already been pre-leased, according to Paula Bohland with Downtown Salisbury Inc.

Young said she’s “excited” and sometimes “nervous” about opening the bakery. She’s been running her business for five years but this will be her first go around with her own brick-and-mortar shop.

There’s still a lot of work to be done in the 960-square-foot space that will become Abigail’s. Young said she could be open by mid-to-late March.

She said she wants to keep the place simple and classy.

She plans to have tables and chairs for customers to sit at — and she might use glass shelves to display her cakes in the large windows looking out on Main Street.

Her mother, Cindy, is helping her with the decorating scheme.

Items will be baked fresh daily, and they’ll be in a display case for customers to view before making their choice.

Young said she will be widening her selection of baked goods once Abigail’s opens, though she’s not sure yet about what else she’ll be making. She said she’ll be taking suggestions from customers.

Young said she will probably serve coffee too, and that she wants her bakery to be a place where people can come to relax.

Abigail’s will probably be open daily except for either Sunday or Monday, Young said, adding she wants to get a feel for how the town works. She might do breakfast, and plans to eventually hire extra help.

Young said even though her business is growing, her goal still remains simple.

“I hope I am kind of who you think of when you need a cake,” she said.