A different kind of college town 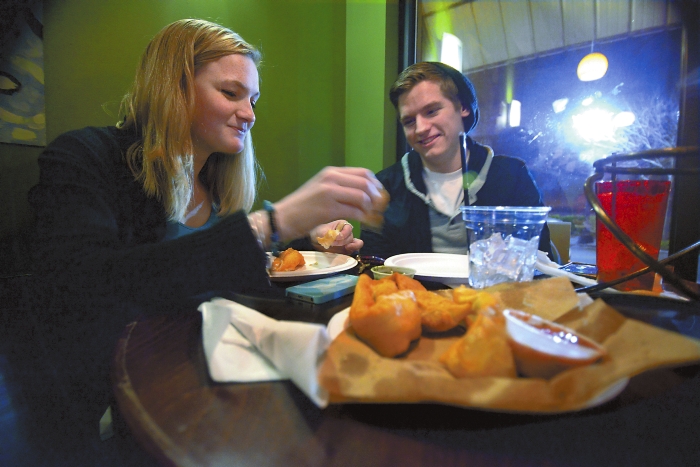 When you think about college towns in North Carolina, Salisbury probably isn’t the first place that comes to mind. With four institutions of higher learning in the city, however, Salisbury is its own unique type of college town.

“The colleges enhance the flavor of the community, but they don’t swallow it,” said Robin Rhyne, director of business development at RowanWORKS Economic Development.

In a stereotypical college town, a large college or university dominates a very small municipality, controlling traffic, business and the housing market.

That’s not the case in Salisbury, though.

Instead, the city and the colleges have a mutually beneficial relationship. The colleges are key to the economic wellbeing of Salisbury, as well as the quality of life of its residents — two aspects that go hand-in-hand.

The colleges employ Rowan County residents to fill positions from janitorial staff to tenured faculty and administrators, hire local contractors for anything from construction to catering and purchase supplies within the community.

Each institution offers unique programs, such as Livingstone’s culinary arts and hospitality program, which draws students to the community that might not have considered Salisbury initially.

“It can’t be understated how impactful they can be on promoting and attracting and raising people’s awareness of the community,” Van Geons added.

Once those students come to Salisbury, they start spending their money locally.

“You can tell when the students are here and when they’re not,” Spalding said, explaining that restaurants and shops seem to fill up more during the school year.

Van Geons said students who live off campus have a “heavy impact on the housing market” and are likely to spend more money in general.

The colleges are also a driving force in Salisbury’s tourism industry.

“There are a number of events that draw people into the community,” Van Geons said, adding that the colleges have to work together to make sure they don’t double book events such as graduations, homecomings and parent weekends because the county’s hotels often reach full occupancy during those events.

The colleges don’t just drive tourism to Salisbury a few times a year. Athletic events and fine arts performances also bring alumni and other attendees to the area on a regular basis.

Catawba College President Brien Lewis said that a number of alumni even return to Salisbury to get married in the chapel on Catawba’s campus, bringing their friends and families with them.

Some students even fall in love with Salisbury and decide to never leave. For those who decide to stay in the area, they add additional long-term benefit to the community as they make and spend money in Rowan County.

According to a survey released last week, Catawba College, its students, visitors and alumni created $91.3 million in added regional income in the region through their spending.

The survey was conducted by Economic Modeling Specialists International and was a part of a larger economic impact study done for North Carolina Independent Colleges and Universities.

The study also says the colleges contributes $13.8 million to the local economy in payroll and benefits, and $27.8 million in goods and services.

Just under half – 45 percent – of Catawba’s students come from outside the region, and will spend $2.1 million on things such as gas, groceries and rent.

Visitors contribute $246,100 to the local economy each year through hotels, restaurants and the like.

The study also said the accumulated contribution of currently employed alumni in the region is $63.2 million to the local economy.

While quality of life is harder to quantify, it’s a vital piece of the relationship between Salisbury and the local colleges.

The colleges are known throughout the community for their excellent performances, guest lecturers and athletic events.

Hood has a number of well known theologians speak, while Catawba and Livingstone provide numerous concerts, performances and sporting events. Rowan-Cabarrus Community College’s Small Business Center, GED courses and personal enrichment classes give the community the opportunity to develop new skills or improve their businesses at a reasonable cost or free of charge.

“All four of them have made impressive strides to engage with the community,” Van Geons said. “What they’ve done an impressive job of is drawing the town to them.”

The community is also able to use the colleges’ facilities for performances, event and meeting places, preventing the town and county from having to foot the bill to construct similar facilities of their own.

The colleges also attract students and staff with specialized expertise, Van Geons said, which has helped bring new and innovative ideas to the community.

The attraction for students

While Salisbury is certainly influenced by the local colleges, the town’s friendly residents and quaint downtown give it its own distinct culture and identity.

For some, like freshman Hannah Scott, that’s exactly what attracted her to Catawba College.

Scott hails from a small town in eastern Maryland and is a lacrosse player. She was offered scholarships to several colleges, but chose Catawba because it felt “homey.”

“I thought it was a cute little town,” she said, adding that it “makes you want to be there.

Most students, especially those that live in the dorms, spend most of their time on campus between classes, homework, events and clubs, but getting off campus is important as well.

“I’ve found I can’t go anywhere in town without running into staff or students,” Lewis said, adding that he consistently sees students interning or working at local businesses.

“I can’t go into Go Burrito or Cook-Out without running into a student,” he said.

“There’s actually a lot to do, you just have to search for it,” said Brandi Gourdine, a freshman from Charlotte at Livingstone College.

Students look at a variety of factors when deciding what to do off campus, including price, environment and convenience.

Price is a huge consideration for college students deciding what to do for fun. College is expensive, and many students either don’t have jobs or have little extra money to spend.

Cook-Out is a college favorite as well.

“That’s like the No. 1 spot,” said Mark Sanders, a junior at Livingstone.

“Every college student loves Cook-Out,” he said, adding that the meals are both filling and extremely cheap.

Whether it’s fun and festive like Go Burrito or the casual coffee shop vibe of Panera or Starbucks, environment is another key component in a business’ popularity among college students.

“There’s a lot of areas for students to meet up,” said Rowan-Cabarrus student Ashlyn Coley.

“I spend a lot of the time at the Starbucks,” said Kim Newton, who commutes from Charlotte to attend Catawba College.

“Plus, who doesn’t like to drink coffee?” she laughed.

Salisbury’s shopping options are more limited than a big city, but include several big box retailers including Walmart, Kohl’s and Old Navy.

The Tinseltown movie theater is popular with students, as well as the bowling alley.

“I like going to the movies almost every other weekend,” Gourdine said.

Downtown Salisbury is a big draw for many college students.

“Downtown Salisbury does a great job of doing some events that cater to that demographic,” Spalding said.

Scott said she enjoys dining at the local restaurants and shopping at the boutiques in downtown Salisbury.

“My favorite place to eat is Salty Caper,” she said and added that the downtown shops are a “one-shop shopping place” for her.

While college students find things to do in Salisbury, they don’t always stay in town to shop, eat and play.

With Charlotte, Concord and Winston-Salem not much more than an hour away, students often go to those larger cities when they’re looking for something to do.

In fact, many students expressed that there are a lot of things they’d like to see come to Salisbury.

While Gourdine said she doesn’t particularly care for the party scene, a lot of her friends take shuttles into Charlotte to go to the nightclubs.

Sanders said he too feels the nightlife in Salisbury is lacking. He and his fraternity brothers spend a lot of time at Firewater Restaurant and Lounge.

“The only place where you can all go to and attend and it’s a college atmosphere,” he said.

Brewer said he’d like to see some more sports bars and a coffee shop or bakery more convenient to campus.

“I’m a sucker for wings and basketball games,” he said.

“I like poetry and stuff,” Gourdine said, adding that she’d like to see some lounges for spoken word and poetry.

Lewis said that Catawba and other colleges don’t just recruit people to participate in the life of the college, but also in the community.

“Students end up maintaining a lifelong connection to this community,” he added.

Getting students to plant their roots in Salisbury and the rest of Rowan County after graduation has become a focus of many in the community over the past year or so, according to Spalding.

The topic has “come up again and again” at the Chamber of Commerce’s community forum events, she said, adding that they want to do everything they can to get the college students to stay after they graduate.

A lot of discussion has gone into figuring out how to get students to “continue to love being in Rowan County” after graduation, Spalding said. “What do we need to do so they will stay here?”

They’re looking at entrepreneurial development so millennials will start their businesses in Rowan County, as well as developing “loft spaces and cool apartments – places where people want to live,” she said.