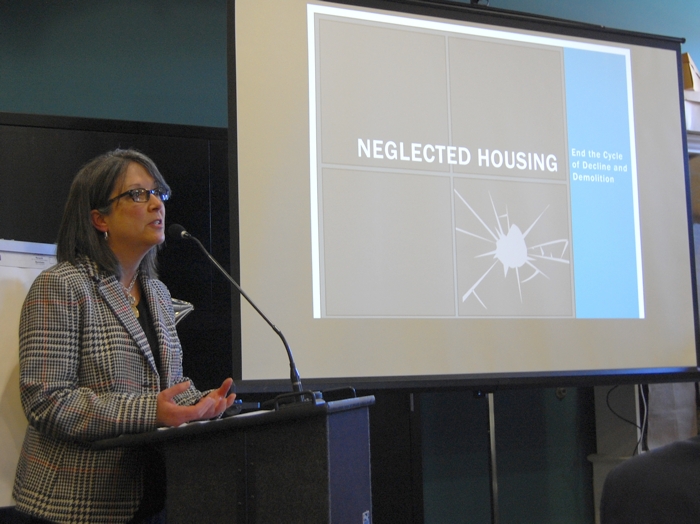 With one day of its two-day retreat behind them, Salisbury City Council, city staff and community leaders gathered Friday at the Lee Street Theater to discuss, among other topics, the city’s long-term vision and housing issues.

City Planning Director Janet Gapen and Planning and Development Manager Preston Mitchell talked about the city’s progress with its 2020 vision and how council needs to start thinking about a 2030 or 2040 plan.

“We’re so far ahead of other cities with our technology,” Gapen said about Fibrant. But now, she said, a big focus needs to be on building up Salisbury’s neighborhoods and continuing to enhance downtown.

Mitchell said it’s amazing how much faster things happen and change compared to five or 10 years ago. He said Salisbury needs to incorporate changes in technology and the ways people communicate when sharing it’s vision with, and gaining knowledge from, the community.

Putting a kiosk people could use to view information about the city’s 2020 plan in City Hall was an example Mitchell used.

A video, produced by Mitchell and other city staff, was shown. It highlighted positive strides the city has made — increasing pedestrian safety, adding green space and greenways, putting downtown on the right path. But it also showed citizens discussing what they think the city needs moving forward — professional, good paying jobs and a working relationship with the county.

Interviews with community leaders, past and present, business owners and young people, such as Catawba College students, were part of the video.

Afterward, council members said they were impressed with the video, but Councilwoman Karen Alexander said she thought a few things were missing from it — such as Livingstone College and its urban farm, the new Civic Park apartments in the West End and Rowan-Cabarrus Community College.

Mitchell agreed that important things were missing from the video, saying it came down to not having enough time to include everything they wanted.

Mitchell then asked council members to think about what the conversation about Salisbury used to be focused on and how the dialogue has changed in recent years. And Gapen stressed the importance of having a big, encompassing vision and the willingness to pull people together as the city plans for the future.

Then the focus shifted to the city’s problem with neglected housing.

The problem is cyclical, according to Chris Branham, who is head of Salisbury’s code enforcement division — which was created as a result of the city’s problem with neglected homes.

Branham said 23 homes have been demolished since 2008 and over 700 homes in the city are currently vacant or abandoned.

The city has to mow the lawn on many unkempt properties but rarely gets refunded  by property owners and ends up having to put liens on the properties. The cycle continues until a home eventually ends up having a demolition order put on it.

To stop the cycle and turn abandoned homes into sources of tax revenue, Gapen and Branham presented a plan that includes urging property owners who aren’t maintaining homes they own, but don’t live in, to donate the home to one of the city’s non-profit organizations, such as the Salisbury Housing Authority, that can find a dedicated homeowner.

Another alternative is to pursue tax-lien foreclosures, allowing the city, or an organization, to buy homes at auction, then rehabilitate the home to a degree while finding a someone to buy the home and finish fixing it up.

To fund the city buying homes, council could use money from the city’s fund balance, Councilman Brian Miller suggested.

Council members were open to the ideas, though Miller said it’s a “slippery slope” and that the city doesn’t want to be in the business of kicking people out of their homes.

Councilman William Kennedy said the root of the problem is a lack of jobs in the city.  Home vacancies increased after the economy collapsed in 2008 and a lot of people ended up out of work, he said, adding council needs to bring jobs to the city to solve the housing problem for good.

Barbara Perry, who has worked for years on the issue of neglected homes in Salisbury, urged council to take action and not let the problem linger any longer.

In the afternoon, council heard from the city’s Parks and Recreation and Finance departments.

Terri Shaw and Michelle Nguyen said parks and recreation directly impact the health of the community by providing places where people can go to be active.

Having green spaces in the community increases the quality of life, Shaw said, and draws people to the city.

There is a growing demand for communities that are pedestrian and bike friendly — easy to get around on foot or on a bicycle — Nguyen said.

The planned Carolina Thread Trail could act as a catalyst for residential and commercial growth in the city, they said.

Shaw and Nguyen said adding green space to the downtown area should be a priority for council. More green space and more events downtown will lead to more people coming and living downtown, they said.

Teresa Harris, the city’s financial services manager, said the city will put together a balanced budget for next fiscal year but that difficult decisions will have to made.

She said property-tax revenue will probably be about the same as in recent years and that health insurance costs for city employees will increase.

She said the loss of the business privilege tax means the city will miss out on $320,000 in revenue.