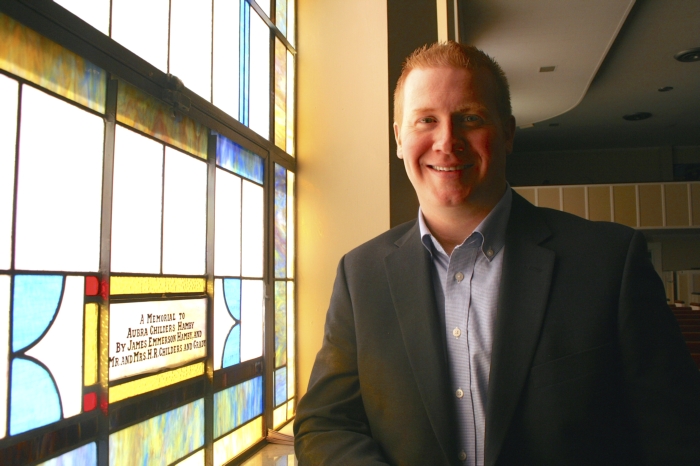 KANNAPOLIS — The Welch name is well known at Blackwelder Park Baptist Church. After all, the Rev. Stan Welch was its senior pastor for some 23 years.

But his middle son, Josh Welch, is making his own name there. Welch, 34, began work Jan. 1 as the church’s new full-time minister for music and youth.

He says that working in his home congregation has been nothing but a blessing — even though he had no intention of doing so.

In the fall, a member of the personnel committee asked Welch if he were interested in being the full-time minister of music, a job he’s held part-time for the past 2½ years. His answer was a polite “no.”

Then the church’s senior pastor, the Rev. Phil Goble, invited him to lunch.

“I knew what we were gonna talk about,” says Welch with a grin. “I didn’t see a plan or vision laid out, but Phil had a vision, a purpose and the leadership. I got to praying about it, and seriously thinking about it.”

At the time, Welch was working full-time for Dale’s Sporting Goods, and wanted to make a comparable salary if he made the switch.

“The financial package was good, and here were are,” Welch says. “There’s another level to step up to with the music. I’m there now, I’m not rushing in and out, and I can do more things.”

All of Welch’s musical training has been hands-on over the years. He started singing in church at age 3. His mom, Melody, also sings.

“I don’t have a music degree, but I’ve learned a lot in the past 2½ years,” Welch says. He leans on pianist Amanda Harper, who does have a degree in music.

Welch has attended Blackwelder Park nearly all his life. He and wife Katie were away for about six months, when a pastor the church hired was not a good fit for the congregation. He returned in September 2012 to help lead the music program.

Being a pastor’s son, he says, has only been a good thing for him. “They’ve known me since I was 3, and I never felt I was trying to live up to my dad’s reputation. We are in different areas of service. It’s never hindered me. I’ve loved doing the music.”

The 11 a.m. service, he says, is a blend of hymns and praise music.

“I believe you can mix them,” he says.

He works with about two dozen choir members, and six members of the praise band.

“We don’t have a whole lot of youth, probably a handful in sixth to 12th grade,” he says. Welch will host Wednesday night Bible studies, and envisions Sunday night events as a time for service, both inside and outside the congregation.

“I’ve been reaching out to kids who were coming to youth group,” Welch says, “and I’m encouraging them to invite their friends.”

He would love to visit South Rowan and Carson high schools, where children of members attend.

Welch kicked off the youth program on Super Bowl Sunday.

“We’re gonna figure this thing out together,” Welch says. “It’s gonna take time to built it. We know that going in.”

“I’m excited about where the youth program is going,” Goble says. “He is working hard.”

Goble says that Welch’s long history with the congregation is “absolutely a help. He and I sat down with the membership roll, and he knew everybody. Not only does he know the members, but they know them. They have an inherent trust in him, because they’re seen him grow up here.”

Ralph Belk is a bassist and longtime member of the praise band.

“He’s just like one of our kids,” he says of Welch. “We like him really well. He’s good. He works with people well.”

“It’s a lively household,” says Welch, smiling at the understatement.

Katie Welch is a nurse on the mother-baby unit at CMC NorthEast, so the two equally share parenting duties.

Welch even thinks he’s passing on some musical talent to his daughter.

“Reese wakes up singing,” he says.