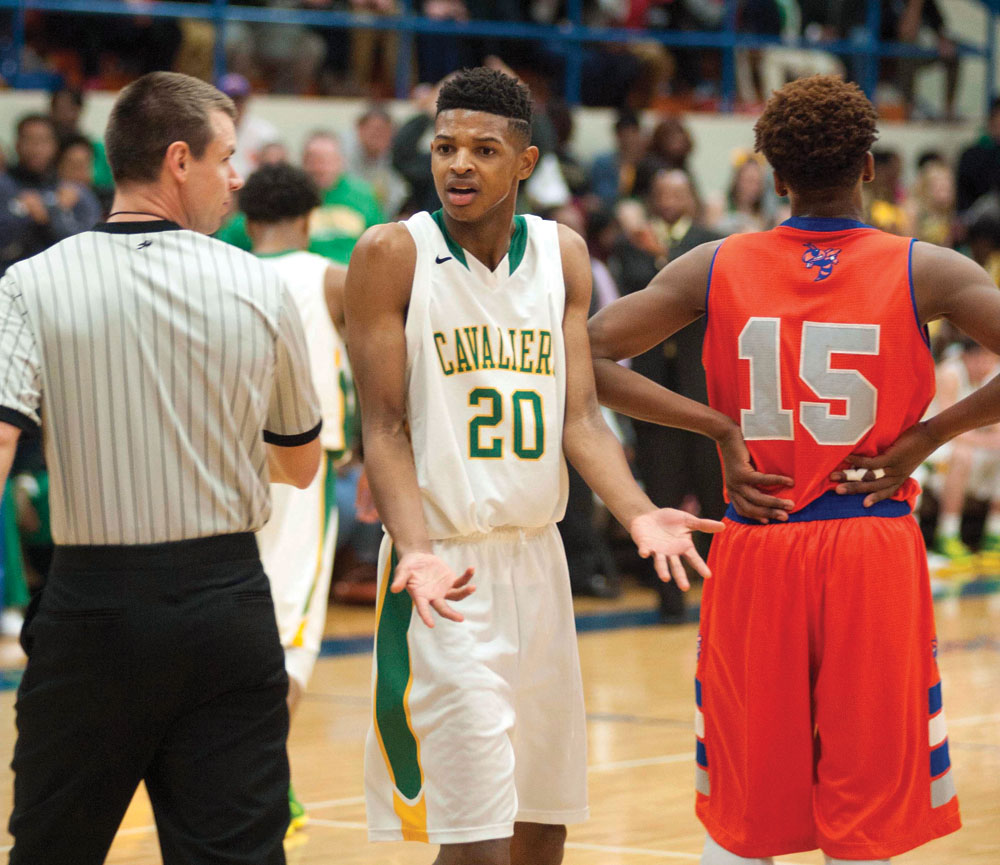 LEXINGTON — All you need to know about Friday’s game at Lexington gym is that Josh Handy made North Rowan’s best play all night — and broke his wrist doing it.

Handy soared well above the rim to block a layup attempt and then tumbled hard to the floor. Handy didn’t realize his wrist was broken until he felt pain as he scooped in what may be the last two points of his junior season. He left the floor after that, grimacing and shaking a wrist bent at an odd angle.

Handy’s injury added to North Rowan’s anguish. The Cavaliers lost 71-57 at rival Lexington, and the home team exited healthy and carrying the CCC tournament championship plaque and the league’s No. 1 seed for the 2A state playoffs.

“We played by the rules with the weather we’ve had and I hadn’t had any communication with my team all week until our pregame meal today,” Mitchell said. “When you go a week without practicing, and then try to play, things like this happen. I didn’t want to play this game. I would rather the conference just gave Lexington the No. 1 seed. Now we’ve got a kid hurt. Now we’re going into the playoffs without our second-leading scorer.”

Lexington (20-4) has won 11 in a row since losing at home to the Cavaliers on Jan. 9. The North Rowan-Lexington rivalry has been hot since the Cavaliers returned to 2A and the CCC. The schools have split six meetings, with one conference tournament win apiece and two regular-season co-championships apiece.

Junior Jalen Sanders had 19 for the Cavaliers.

Lexington pushed to a 10-point lead before Sanders made two nice passes — one to Joseph Scott for a layup and one to Handy that set up the big man drawing a foul and sinking two free throws — to get North Rowan within 38-32 at halftime.

Page had three 3-pointers and 15 points at the half.

North Rowan shot 54 percent in the first half and was down six. Not a good sign.

When Sanders opened the second half with a 3-pointer, the Cavaliers made their charge. They got as close as 44-42 on a Henderson Lentz 3-pointer with 4:40 left in the third quarter.

“They were taking away Page, but we’ve got a lot of scoring threats,” Lexington coach Jon Weavil said. “Then Daniel Reid-Bennett stepped up.”

Bennett scored eight attacking points in an emotional flurry, as the Yellow Jackets regained control. Then North Rowan lost Alexis Archie, who is important on the boards.When Archie got his fourth foul, Mitchell waved Wesley Jefferies to the scorer’s table to replace him, but Archie got his fifth on the next whistle.

“Alexis got a rebound, they grabbed his arm, and that was his fifth foul,” Mitchell said. “Every time we made a run, they started shooting free throws.”

Lexington shot more free throws and made 15. Benson and Page finished off the Cavaliers. North Rowan didn’t have a matchup for Benson — a strong, 6-foot-4 post player — and has great footwork.

“This was big for me,” Benson said. “This is the third straight year we’ve played for the conference championship, but this is the first time we’ve won.”

A lot of the winning was done with defense.

“We held one of the best teams in the state to 57 points,’ Weavil said. “I’m extremely proud of our defense.”