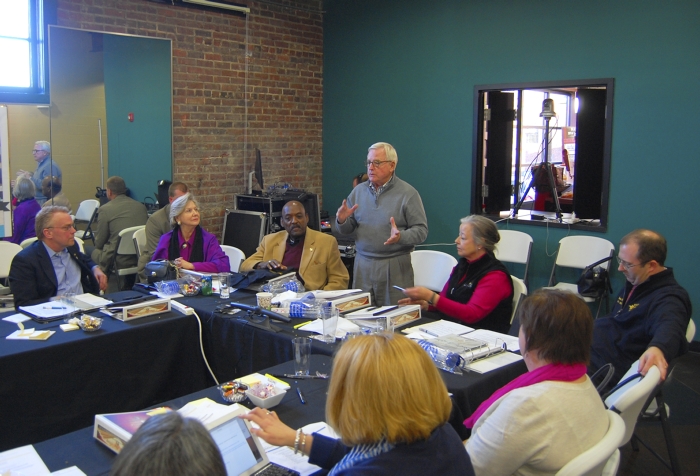 Marketing the city, assessing infrastructure needs and tackling housing problems are some of the priorities Salisbury City Council established for 2015 and beyond during its retreat.

After two full days of discussion, debate, analysis and a few laughs, council finished its 30th annual retreat, held at the Lee Street Theater, by assessing last year’s goals and setting new ones.

The major tactical goals that council set are: Putting together a strategy for marketing the city and its fiber-optic network, Fibrant; Coming up with an infrastructure-needs plan for the city, especially the downtown area; using “virtual permitting” to promote development; continuing its collaboration with the Rowan-Salisbury School System and finding a way to stem the tide of abandoned homes in the city.

The main objective of the goals is to encourage people and businesses — jobs — to come to Salisbury and make the city their home.

Much of Thursday was spent talking about marketing Fibrant and the city. Council members agreed that now is the time to start maximizing Fibrant’s return on investment. To do this, a marketing firm, Clean Design, has been hired to help the city tell its story and spread its message.

Council wants to start getting as many local businesses as possible connected to Fibrant while also aggressively recruiting new companies that are attracted to Salisbury because of its fiber-optic network.

Finding out how the city’s infrastructure needs to be enhanced to promote business and growth has been ongoing, but now council wants to have a plan put together so the city can know which areas it can take immediate action in and the ones that’ll have to be addressed down the road.

Virtual permitting involves the city having pre-approved site plans that a developer can take on immediately. Potential developers could tour sites virtually online.

The process is primarily for industrial sites, city planner Preston Mitchell said, but it could also work for downtown.

City Council wants to continue its partnership with the county’s school system because, council members said, having great schools is crucial when it comes to recruiting top companies and bringing families to the city.

The city has over  700 vacant homes and isn’t collecting property taxes on most of them. And deteriorating homes hurt property values, causing people to move out of neighborhoods with abandoned homes.

One plan to solve the problem involves getting absentee property owners to donate vacant homes to one of the city’s housing organizations, such as the Historic Salisbury Foundation or the Salisbury Housing Authority. The organizations could then find dedicated homeowners for the houses.

Another way to tackle the issue is for the city to pursue tax-lien foreclosures on abandoned properties it has liens against. The city would then buy a foreclosed home at auction, fix it up a little bit and sell it.

Other goals City Council set include updating the city’s comprehensive 2020 vision to look further into the future, putting renewed emphasis on customer service and starting to repay the $7.6 million in inter-fund loans the city took from its water and sewer enterprise to help support Fibrant when it was struggling in its first few years.

The city will also be looking at a plan to change out water meters. Many meters around the county are decades old and no longer accurately track the amount of water a home or business uses — resulting in lower water bills for customers but less revenue for the water department.

The old, mechanical meters are being replaced with new, digital ones that provide a range of benefits, according to officials with Salisbury-Rowan Utilities. With the new meters and the software that goes with them, customers and the utility can track water usage at a home or business daily — this can help businesses that use a lot of water be more efficient and alert homeowners to potential water leaks.

The new meters have been implemented in a few areas around the county, and council will have to decide how to go about replacing all the meters in the long term.