Trouble for ‘Trouble’: Neighborhood works to lure stray kitten in from cold 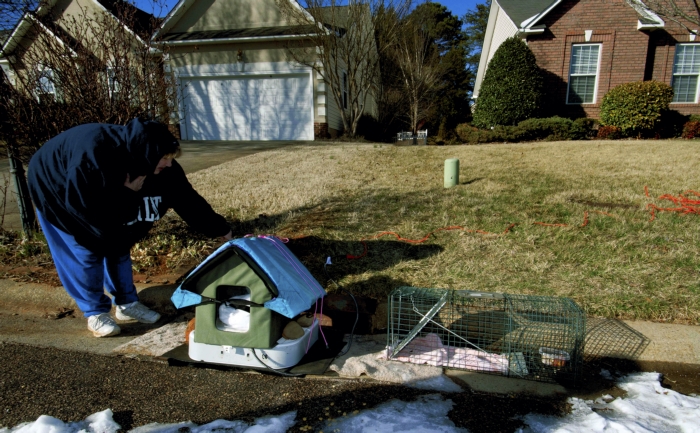 ON C. LAKEY / SALISBURY POST Mickey Jo Long and her neighbors in Wood Field subdivision off Hawkingstown Road have been trying to catch a couple of stray kittens that have taken shelter in the storm drains that run through the neighborhood. Long comes out to reset the trap and see if the cat was in the house. Thursday, February 19, 2015, in Salisbury, N.C.

They’re looking for “Trouble,” the unofficial name they’ve attached to a black kitten who has been living, for the most part, in a storm drain below the street.

The degrees of concern have gone up as the degrees of cold have gone down, plummeting to record levels. Thursday night, the expected low was 1 or 2 degrees, capping off almost a week of bitter cold and fits of snow, sleet and ice.

More is in the forecast.

“I love animals,” Mickey Jo. Long says, “and I can’t stand to see one hungry or cold.”

Long and her husband, Thomas, are part of a small army of Overhill Road residents in Wood Field who want to bring Trouble in from the cold.

Mickey Jo already was able to lure and capture Trouble’s sister, Valentine, also black and of the same age, by having the small kitten eat some ham from her fingers.

Valentine is staying at the Longs’ house since she was rescued on Valentine’s Day, hence the name. But capturing Trouble, who is more skittish, hasn’t been as easy.

Next to the storm drain into which Trouble often disappears, Roby and Inez Snider have provided a heated house into which the black kitten could come and go on a cold night.

The drop cord attached to the insulated house runs across the yard of Pat Harmon, who also has been on the lookout, and over to the Sniders’ house.

Those trying to catch Trouble also have put a trap filled with food next to the heated house. If Trouble ever goes in there, he won’t come out. Salisbury Animal Hospital provided the contraption.

Long said people have been taking turns, checking on the trap in 30-minute intervals. Some nights, residents have been out with flashlights and lawn chairs looking for Trouble to appear.

Patty and Walt Beaver and the Longs’ friend Sue also have been deeply involved in trying to entice Trouble into a warmer world.

“It has really been a whole neighborhood watch,” Long said Thursday afternoon. “It’s just breaking our hearts. None of us are sleeping well.”

Earlier this week, residents asked the Salisbury Fire Department for help, and a crew from the West Innes Street station came to investigate, but Trouble can travel long distances in the storm drain piping under the street, making his capture difficult.

Long found some comfort in hearing firefighters opine that Trouble may be a little warmer underground than above ground.

Long judges that Valentine and Trouble, who are almost identical, are about 12 weeks old. They were first seen in the neighborhood about two months  ago, and both soon made the storm drain their home. An adult cat was never with them.

Today’s high will reach about 25, and tonight’s low will be 19. Some more wintry precipitation could be coming Saturday, leading into rain Sunday.

So things could be troubling for Trouble.

Meanwhile, Valentine is adapting to the indoor life at the Longs’ house, though Mickey Jo said Valentine still tends to seek out dark, tight places.

When both kittens are reunited and not in danger from the winter’s cold, Long said she hopes to run a free ad in the newspaper, offering the kittens to a good home.

There might be a catch, as far as Valentine is concerned.

“My husband has fallen in love with this one,” Mickey Jo said, holding the kitten. “I don’t know if she’ll be going.”

Those with ideas on how to capture Trouble or who are interested in providing a home for the kittens are being asked to contact Mickey Jo Long at 704-633-8354. Contact Mark Wineka at 704-797-4263, or mark.wineka@salisburypost.com.