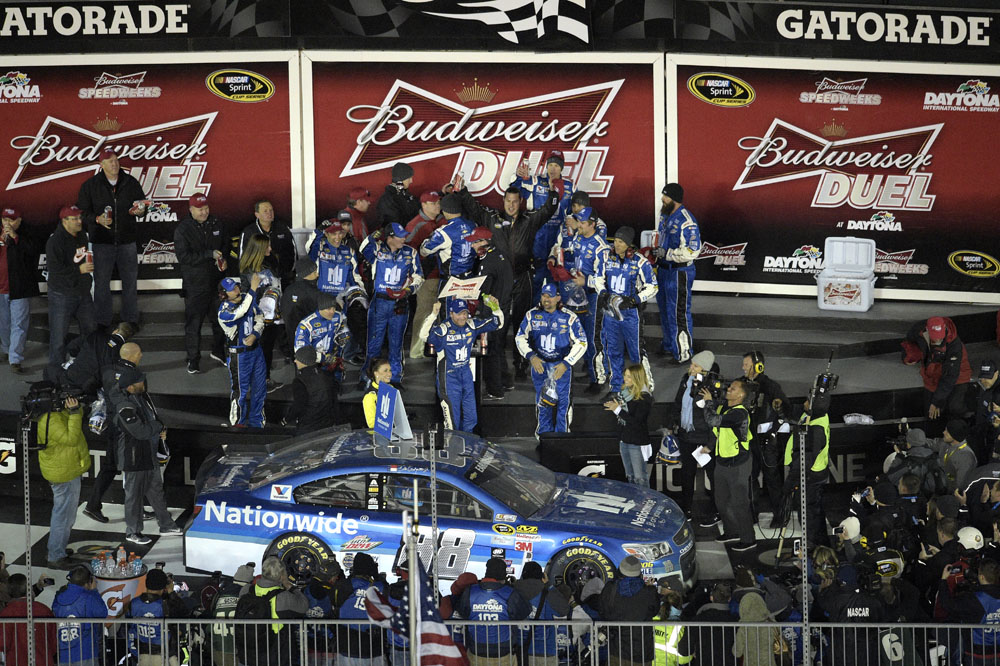 The Associated Press Dale Earnhardt Jr., center, celebrates in victory lane after winning the first of two qualifying races for the Daytona on Thursday at Daytona International Speedway.

The Earnhardt and Johnson wins were anticlimactic, with the drama saved for Danica Patrick’s desperate bid to make Sunday’s opening race.

Her second incident with Denny Hamlin in two days led to a frantic effort by her Stewart-Haas Racing crew to make rapid repairs for her to have a shot at making the 500. She restarted 18th with two laps to go and was pushed all the way around Daytona International Speedway by teammate Kurt Busch to finish 10th.

It was good enough for her to make the field — Patrick had to finish inside the top 15 of the second duel — but any joy was immediately lost as she confronted Hamlin on pit road.

An incident between the two in Wednesday’s practice sent Patrick to her backup car, and she felt Hamlin had spun her Thursday night.

They had a heated argument, with Hamlin at times appearing to try to calm Patrick, and he finally seemed exasperated when he covered his face with his hands.

Tony Stewart, her car co-owner, entered the fray and seemed to shout at Hamlin.

“Tony came down and said, ‘You need to watch the replay,’ which is good to hear. My boss obviously was sitting on the pit box and saw it,” she said. “We’re going to have to figure it out because this isn’t going to end well.”

Hamlin was adamant that Patrick’s car was too loose, he didn’t touch her and the spin was an aerodynamic issue.

“I try to treat everyone as equal,” Hamlin said. “If you’re in this Cup series, you deserved your way here and you can handle a lot of situations. I just got close to her and her car got loose again. I just tried to explain that, ‘Danica, oh, it’s you, I’ve got to stay away two feet because your car is loose?’

“We’re trying to move forward. What are we racing for? Eighth in a twin race? It’s not much, but I guess I just have to give more room because once I get close enough to her, her car just gets out of control.”

When Hamlin and Patrick were finally separated, Busch was waiting to congratulate her. He did it by cupping her face with both hands; Busch has been accused by an ex-girlfriend of domestic assault, and he has maintained he merely cupped her face.

Meanwhile, Hendrick Motorsports has dominated qualifying and will start 1-2-3 in “The Great American Race.”

Jeff Gordon and Johnson swept the front row Sunday in the first round of qualifying. Then Earnhardt, the defending Daytona 500 winner, won the first duel to take the third starting spot.

“We’ve had a great car all week,” Earnhardt said. “I’m so glad to get through the duel in one piece because I know how good this car is. We’re going to have a fun day on Sunday.”

Gordon, the four-time NASCAR champion, finished second in the duel and was followed by Joey Logano, Stewart and Clint Bowyer.