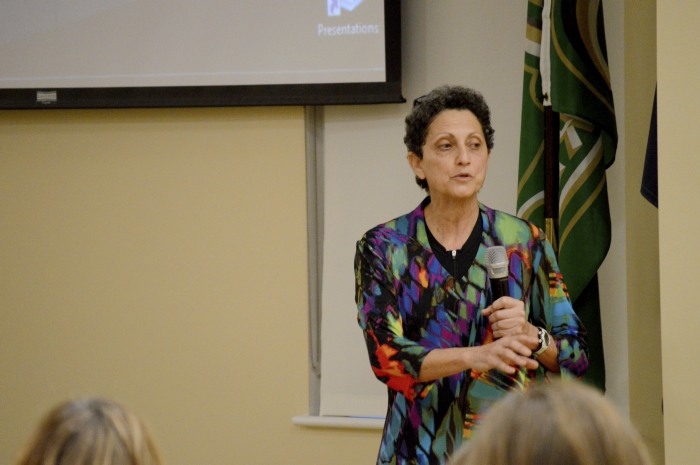 Josh Bergeron / Salisbury Post - Dr. Miriam Morey, a Duke University professor, on Thursday talks about findings in a Healthy Aging Study during an event at the N.C. Research Campus.

KANNAPOLIS — Duke MURDOCK Study representatives on Thursday confirmed the existence of a collaboration with Google, a multi-billion dollar company, during an event intended to update the community on the status and results of ongoing research.

The announcement came at the beginning of an event at the N.C. Research Campus. While welcoming attendees, Duke Translational Research Institute Chief Operating Officer Victoria Christian, a founding member of the MURDOCK Study, confirmed that a part of the Research Campus would be used for Google’s Baseline Study.

At the event were a few dozen MURDOCK Study participants and N.C. Research Campus staff.

Christian declined to immediately discuss the Google Study after the event. While standing in front of the study participants and staff, she said Google’s study wouldn’t compete, but rather augment the work done by Duke University staff and faculty.

The Wall Street Journal first reported the story in July 2014, saying Google’s Baseline Study would collect genetic and molecular data from 175 individuals and thousands more later on to “to create what the company hopes will be the fullest picture of what a healthy human being should be.”

According to a January news release, Duke would use 5,000 square feet of office space with four exam rooms in the Medical Office Building on the campus starting in July. The space will allow for collaboration between Duke and partners including Google, the news release said.

Immediately after the welcoming, MURDOCK Study staff dove into findings from research on multiple sclerosis, cognitive health and healthy aging.

As a part of the study, Cote said researchers are focused on trying to develop bio-markers that can help identify the disease diagnosis.

“Ultimately what we want to know is about mechanism — how the disease is progressing,” she said.

Dr. Kathleen Welsh-Bohmer, a Duke assistant neurology professor, wasn’t at the event. Instead, her presentation came in the form of a recorded video projected onto screens. Welsh-Bohmer said if a therapy started immediately that delayed the onset of alzheimer’s disease five years, it would reduce the prevalence of the disease by 40 percent in 2050.

She said the delay would come by doing certain kinds of treatment before symptoms of the disease become severe.

Dr. Miriam Morey, a Duke professor focused on exercise and aging, inspired the audience to do more — more exercise, more laughing and even more eating, if it’s healthy food.

“As a whole, our country is probably more sedentary than it should be,” Morey said. “But, the surprising thing that’s only coming out from the kinds of research we can do now is that time spent in sedentary activities.”

She said the amount of time spent doing sedentary activities is in the mid- to high-90s in percentage points. She said sedentary activity could also include things that require little effort.

Morey’s research showed that participants in the MURDOCK Study were above average for a few categories, including the walking speed per age and the balance test. In other categories, MURDOCK Participants were below recommended or average amounts.

She said it’s never too late for elderly people to start exercising.

California billionaire and Dole Food Co. owner David H. Murdock started the research campus in 2006 on the site of the former Cannon Mills in Kannapolis. The MURDOCK (Measurement to Understand the Reclassification of Disease of Kannapolis/Cabarrus) Study is named for him.