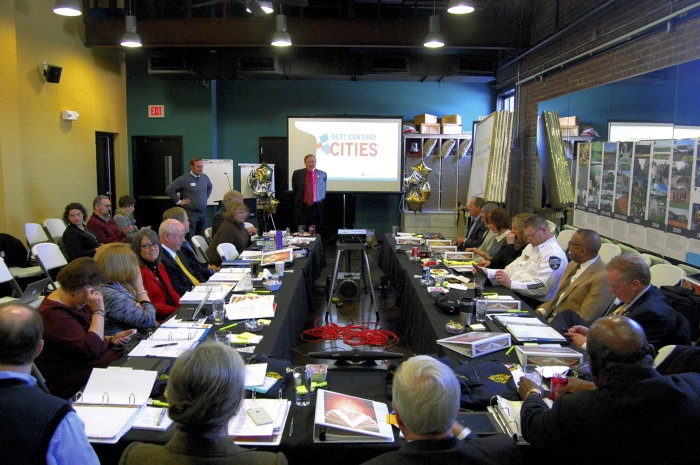 Salisbury City Council is holding its annual retreat at the Lee Street Theater. City officials, staff and many others attended Thursday's sessions. Council members are in the foreground facing interim City Mananger John Sofley, who is standing at the end of the table.

How to promote the city and its broadband network as a package deal was the main theme during the afternoon session of Salisbury City Council’s retreat Thursday at the Lee Street Theater.

Council members, city officials and staff, and others were told the city must create a message and come up with a marketing scheme to sell that message to people and businesses both inside and the outside the city’s limit.

Kent Winrich, the new director of Fibrant, and Robert Van Geons, the county’s head of economic development, said all the pieces are in place to take Fibrant to the next  level and start using the fiber-optic network to aggressively recruit the businesses of tomorrow.

Winrich said Fibrant will be partnering with the University of North Carolina Charlotte on two projects. The first involves student teams at the university developing “end-to-end customer-service management solutions” for Fibrant. For the second project, students teams will identify companies whose needs fit what the city has to offer with Fibrant.

Winrich said private companies were also vying for the chance to partner with the university, but that the city’s proposals were the most popular.

Van Geons said there is a large range of business ventures that could come to Salisbury because of Fibrant — from healthcare to media to data centers.

Van Geons mentioned a 3D-printing company that has expressed interest in the city.

He added companies and business ideas that haven’t even been thought of yet are what Salisbury should be preparing for.

There are people today looking for the environment Salisbury has, he said, adding he will be targeting companies that are on the upswing.

He also said having Fibrant is about social justice — it can directly impact education and poverty in the community.

Winrich said Fibrant currently has strong interest from businesses already in the city that haven’t yet joined the network, and that Fibrant’s sales team is performing extremely well.

The city currently has a backlog on Fibrant installations of about two weeks because of the rising demand, Winrich said.

City officials also spent time lauding Fibrant’s customer service, which they said is exceptional. And they also stressed the importance of maintaining a high level of customer service.

Deb Socia, executive director of Next Century Cities, said Salisbury needs to share its story with the world.

“Sell it,” she said about the community and Fibrant. The city must become an avid “salesperson,” she said.

Socia, whose organization works to promote municipal broadband networks, also spoke at a luncheon Thursday where she praised the city for taking the risk of building a fiber-optic network and urged the community to come together to get the greatest benefit out of its investment.

At the retreat, she said city leaders should work to make sure residents have a reason to be attached to the community. And that the city needs to use every medium possible — from social media to word of mouth — to spread its message about being a “Gig City.”

The city should help residents get online, Socia said.

She said the city should prepare for problems, because they will come along, and have a plan to deal with them.

Help people help you, she said about city leaders supporting people in the community.

Earning support and trust from the community will make it easier to disseminate the city’s message, she said.

To help develop that message, the city has contracted a Raleigh-based marketing firm called Clean Design. Finding a marketing firm was a goal council established at last year’s retreat. After a lengthy search, city officials settled on going with Clean Design last week.

Jeremy Holden, with Clean Design, said the city is trying to create a movement, and that movement needs a story to go with it. It’s about finding the one thought that motivates everyone, he said.

And “it’s all about telling a story,” Holden said.

Councilman Brian Miller asked if the city needs a to develop an economic development strategy for Fibrant, and Van Geons said yes.

Mayor Pro Tem Maggie Blackwell expressed concern about the city moving too slow in getting the word out about Fibrant. She said the timeframe to capitalize on having a fiber-optic network is limited as other cities race to catch up.

The slow pace that municipal government operates at is a hinderance, she said, referencing how finding a marketing firm took the city a whole year.

“We have got to get rolling,” she said.

Sofley responded by saying the city had to get the right staff in place before moving forward.

Councilwoman Karen Alexander said council has a responsibility to the community to develop a plan and goals that citizens can see and be a part of.

Offering a political view of the situation, Councilman William Kennedy said come election season this year people running for council seats who are against Fibrant will ask, “How many jobs have you created?”

We have got to be able to tell them something, he said.

Lane Bailey, who will take over as city manager in March, said the city needs to go after the “low-hanging fruit” first — meaning reaching out to existing businesses in the community that aren’t using Fibrant.

Van Geons said he was happy with what he was hearing from council. “Because this is different from the conversation we’ve had in the past,” he said.

Mayor Paul Woodson said no matter what, the city must continue providing great customer service if it wants to be successful in the future.

“Great meeting,” he said afterward, “We get fired up about Fibrant.”

Council will meet today at 10:30 a.m. at the Lee Street Theater to continue the retreat.