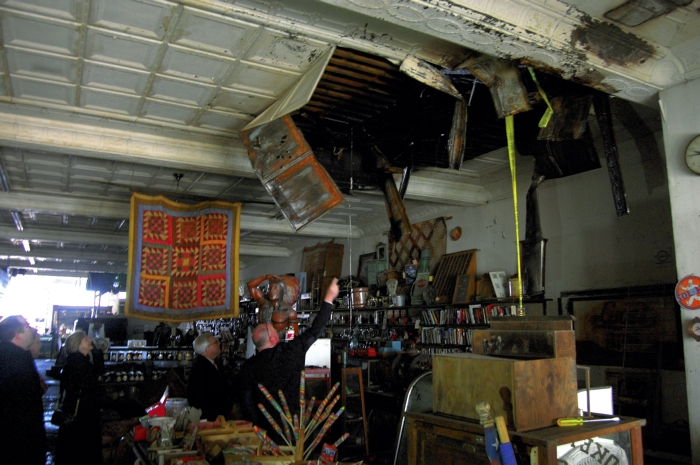 Salisbury Fire Chief Bob Parnell points to damage in the ceiling of the Okey Dokey General Store as Mayor Paul Woodson stands next to him. A fire on the second floor of the building on Wednesday caused heavy damage. Council members Karen Alexander, Maggie Blackwell and Brian Miller are on the left.

Emergency personnel saved a large portion of the Okey Dokey General Store from fire damage in a three-alarm blaze Wednesday that started when electrical wiring malfunctioned, according to firefighters.

The store, located in an East Innes Street building that’s divided into three separate spaces, caught fire Wednesday afternoon and immediately was declared a two-alarm fire because of its downtown location. It was upgraded shortly after to a three-alarm fire and elicited a response from fire departments as far away as Charlotte.

Salisbury Fire Marshal Terry Smith said the fire appeared to have started in the ceiling between the ground and top floor, when old wiring malfunctioned. The fire’s starting point is also the same location as a large hole measuring 16 square feet.

After examining the building, Salisbury Battalion Chief David Morris said the entire ground floor was intact following the fire. Only the room closest to Innes Street was burned significantly in the fire, Morris said.

“To simplify it, the fire was contained to the point and room of origin,” Morris said.

Both Morris and Smith credited the response of multiple organizations and city departments in helping to prevent the blaze from becoming any worse.

“This wasn’t just a fire department effort,” he said. “This was an entire effort by the community as a whole. It’s important to say thank you to all of those people because this certainly couldn’t have happened otherwise.”

One of the organizations he specifically cited was Salisbury-Rowan Utilities, which pumped approximately a foot and a half of water out of the building’s basement.

The fire appeared to be under control about an hour after firefighters arrived, but crews stayed on the scene to monitor the building. Smith and Morris said firefighters continued to extinguish hotspots and fire flare-ups until about 10 p.m.

“We kept crews here all night just to make sure nothing flared up, and nothing did, but we wanted to have them on scene just in case,” he said.

As smoke billowed out of Okey Dokey’s second story windows, a small group of firefighters slowly moved up a stairwell to the second floor. Morris said firefighters saw flames near the top of the stairs and used a thermal imaging camera to see the large hole in the ceiling separating the first and second floors.

“At that time, we backed all of our crews out and went from an offensive attack to a transitional fire attack, where we used lines from the outside of the building to knock down the additional fire,” he said. “That gave us time to re-evaluate the stability of the structure to see how much it had been compromised by the fire.”

“I don’t remember what I said,” he recalled. “I just thought, ‘This can’t be happening.’ I hate this worse than anything I’ve ever hated in my life.”

He plans to rebuild the the Okey Dokey store and on Thursday said it was the first day of his rebuilding process.

Neither store employees nor firefighters were injured during the fire.

Morris and Smith said the flames didn’t cause any damage to the neighboring parts of the building. However, employees of Simply Good Natural Foods — in an adjacent space in the building — said water entered their business, causing some damage.