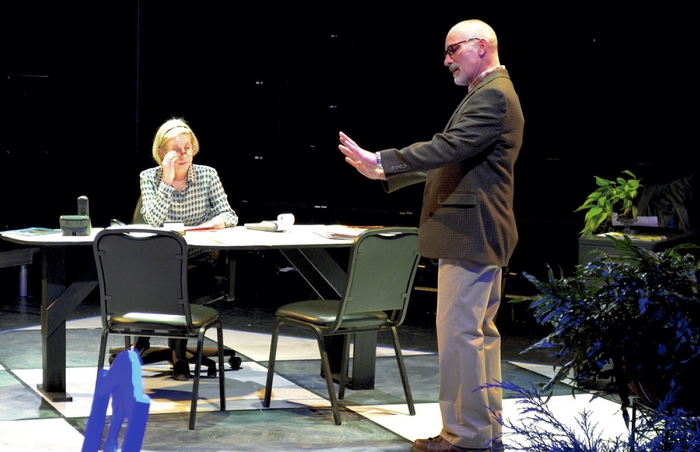 The appreciative audience who braved temperatures in the teens was treated to an evening full of laughs and “beautiful pain.” After all, what would you do if you had a chance to just … drive away?

Becky Foster is a middle-aged wife and mother who works in a car dealership (the show sponsor is Gerry Wood Auto Group, wink). Her husband, Joe, seems a nice enough guy, but their son Chris, 26 and still living at home, is a psych major who thinks he’s smarter than his mother.

One night, Becky meets the sweet but loopy widower, Walter Flood, who assumes that she, too, has just lost the love of her life.

Becky never tells him otherwise, and so the ride begins.

Along the way, we meet Walter’s daughter, the lovely Kenni, and their friend, Ginger. Walter’s late wife thought Ginger would swoop in on Walter after she was gone.

Then there’s Steve, Becky’s co-worker, who’s also mourning his wife. She evidently died in a tragic hiking accident. He can’t seem to get over it, and Becky seems to spend a lot of her time “talking him off the mountain.”

Theater-goers will recognize many familiar faces in this collaboration between Lee Street Theatre and Center for Faith and the Arts.

Tim Campbell, who plays Chris, has appeared in “Next Fall,” “Les Miserables” and “The Count of Monte Cristo.” Although his character’s ease in spouting off detailed psychological terms is a bit annoying — and perhaps a little more than familiar to those who know Campbell — his mother says he’s nowhere that obnoxious in real life.

When he asks Becky, “Mom, what are you doing with YOUR life?” you just wanna reach out and smack him.  But Campbell makes playing the intellectual in the cast look easy.

Then there’s Len Clark, who plays Walter Flood with such grace and panache. Clark is a 30-year veteran of local theater, and it’s a real pleasure to watch him play someone trying to mend his broken heart.

Claudia Galup is again in the director’s chair for the production. The characters seem so real and organic, and that’s probably due in large part to the petite Galup’s deft hand.

Shannon O’Donnell brings youthful exuberance to the role of Kenni. She could play her as a spoiled brat, but Kenni doesn’t come off that way at all. O’Donnell is a senior at Catawba College, and Galup revealed last night that the young actress has just been accepted as a performer on the Disney Cruise Line. She’s definitely on her way!

Theresa Pitner, as Ginger, is making her Salisbury debut into the limelight. Her last role, according to the playbill, was “2nd Villager on the Left” in her high school production of “Oliver.” In the meantime, she married and raised a son. But she gives Ginger such life and gusto, and seems to relish “swooping in” several times throughout the evening.

With this production, Jon Planovsky, as Steve, makes his Salisbury acting debut. You can find him behind the counter at Critters, the downtown gift shop he owns with husband Bob Lambrecht, who sat on the edge of his seat opening night.

At one point, Steve is describing an episode where he has a bit of a meltdown involving a young boy and his puppy — and it’s a hoot. This scene in and of itself is pretty much worth your admission ticket.

Bob Paolino, a local and area acting veteran, should also be worth a big chunk of your ticket. At first, you think he’s just a regular Joe, but Paolino gives his character a breathtaking depth.

Things unravel faster than they can ravel, Walter tells him at one point, but Joe wants to stick around and see how it all plays out.

You’ll want to as well.

The main reason to stick around is to see Becky, played by actor and writer Jennifer Hubbard. Wow! What middle-aged mom couldn’t relate to Becky? It’s not that she really lies, per se. She just commits the sin of omission. She doesn’t tell the whole truth.

But Hubbard is the reason you hold your breath, ’cause you know this ride’s gonna break down at some point — spectacularly — and you can’t wait to see it. Oh c’mon now, who doesn’t crane to see a car wreck?

And Becky’s crash is awe-inspiring. You know, the kind you want OTHER people to have, so you and your girlfriends can discuss it and dissect it among yourselves.

Does Becky get her life back on track? Does she want to?

You’ll have to ride along and find out.