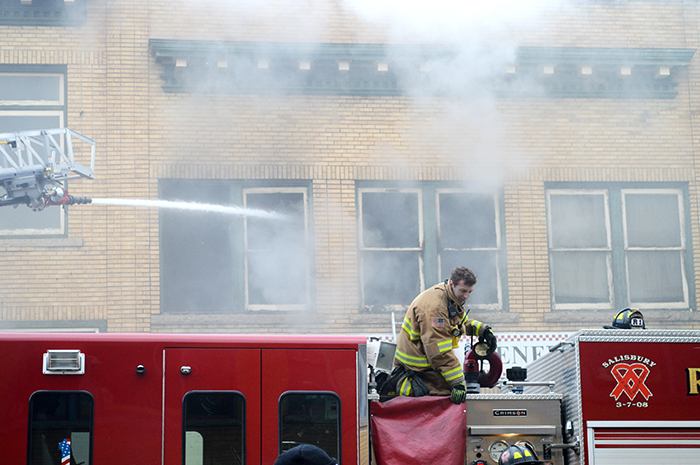 Josh Bergeron / Salisbury Post - A firefighter climbs up onto an engine as water shoots into the burning Okey Dokey General Store in downtown Salisbury.

No injuries were reported at the store, which dates back to the early 20th century. Dozens of emergency personnel, from as far away as Charlotte, filled two blocks of East Innes Street, as smoke billowed from the building’s second floor. As a result of the fire, several blocks of Innes Street, both East and West, were closed for hours.

The fire started shortly after 3:30 p.m. When the first firefighters arrived on the scene, smoke was billowing from the building’s second floor. At 4:30, the fire seemed to be under control and not a threat to buildings on either side, which share common walls. The Simply Good health food store is immediately next door, and Rent-A-Center is two doors away.

It was immediately declared a two-alarm fire because of its downtown location, said Salisbury Fire Chief Bob Parnell. It was later raised to three-alarm status. Firefighters said the fire was focused, and potentially started, in the center of the building, according to Parnell. He said the center of second story’s floor had “burned out.”

“We were able to knock it out real quick and the crews did a great job,” he said. “Downtown is high-density and has old construction and it’s one of the gems of Salisbury. We’re always worried about the spread, left, right, back and forth. That’s why we used the degree of response with the automatic second alarm and ladder trucks.”

A cause was undetermined Wednesday evening. Firefighters remained on the scene for hours after the fire was under control. Parnell said crews wouldn’t likely be able to thoroughly inspect the building until today, because of extreme temperatures.

Following the fire, Parnell said the public should avoid the building for safety reasons.

Bette Pollock opened Okey Dokey & Co. General Store at 126 E. Innes St. in December 2002, with partner Stanley Williamson, according to Post files. They bought the building from the Rufty family.

Oscho Rufty, who worked at the family’s general store for 21 years, watched the scene unfold from the sidewalk nearby.

Rufty and his nephew, Geof Wilson, still own the buildings on each side of Okey Dokey. Rufty said the whole row of structures was built in 1921 and the common walls between them are probably 18 to 24 inches thick.

Rufty worried that all the water being poured on the second floor would be falling through to the first floor and causing significant damage. He actually still owns the front sales counter in Okey Dokey and hoped he could donate it someday to the Rowan Museum.

Rufty said he was impressed by the Salisbury Fire Department’s organized attack on the fire and said the city was fortunate “to have a fire department like we have.”

“I give them kudos,” Rufty said.

The fire attracted many spectators, including those people watching from storefronts across the street.

Oscho Rufty, named for grandfather O.O. Rufty, said there had never been a fire in the 1921 building until Wednesday.

From 1999 to 2003, Oscho Rufty also operated Rufty’s Market next to the general store. Rufty’s Market was a restaurant, meat market and ice cream fountain. He closed that business in 2003, to become facilities manager at St. John”s Lutheran Church.

Rufty heard of Wednesday afternoon’s fire from someone stopping in at the church, located just two blocks away.