NBA: Hornets hope for another stellar second half 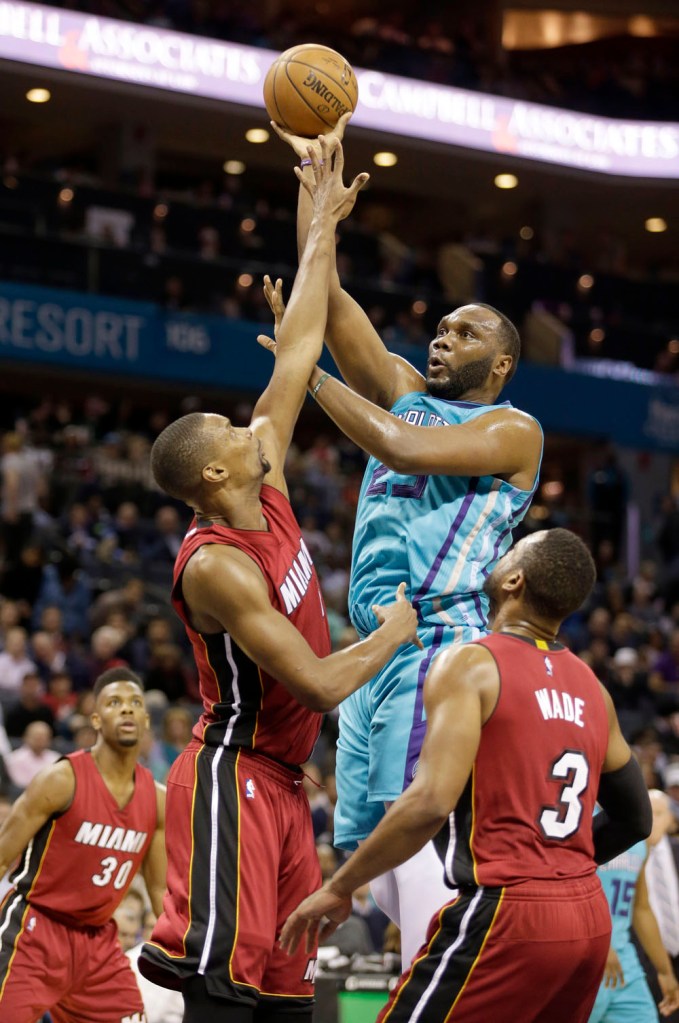 The Associated Press Charlotte's Al Jefferson, shown shooting over Miami's Chris Bosh and Dwyane Wade, will have to play in the second half of the season like he did down the stretch in 2013-14 if the Hornets hope to hold on to their No. 7 spot in the Eastern Conference.

CHARLOTTE, N.C. (AP) — Al Jefferson is confident he has another strong finish left in him that’ll help propel the Charlotte Hornets back into the postseason.

“I have to,” the 6-foot-10 center said Wednesday as the team returned to practice.

Jefferson averaged 24.4 points and 11.6 rebounds after the All-Star break last season, helping Charlotte close the season 16-9 and earn the seventh seed in the Eastern Conference playoffs.

Jefferson said the nagging injuries that have been bothering him most of the year have subsided, thanks in large part to the rest he got during the All-Star break.

Charlotte could use another spark from Jefferson in the upcoming weeks.

The Hornets are clinging to a tie for the seventh-best record in the East with five other teams within two games of them.

The Hornets need Jefferson now more than ever, particularly with leading scorer Kemba Walker sidelined for about another month following knee surgery.

Coach Steve Clifford said he hopes Walker will be back on the court for a five-day road trip beginning March 16.

He also said starting small forward Michael Kidd-Gilchrist could return Saturday against Oklahoma City, while backup center Bismack Biyombo remains out for at least another week.

“Our guys have to know that we do have enough (talent) to win,” Clifford said. “When Kemba comes back that will be great, but he’s not going to be back for a while. You have to play with the guys you have. … But I feel we have enough — if we have the right approach and play the right away.”

Clifford said as long as his team sticks to the approach of playing consistently tough defense, rebounding and limiting turnovers, they will have a chance to return to the playoffs.

“Our game may not be pretty but it will work, Clifford said.

With Walker out, the Hornets will rely on Brian Roberts and the newly acquired Mo Williams to run the point.

Williams, acquired in a trade last week with Minnesota, spent overtime working with coaches Tuesday night getting to know the playbook so he would be ready for his first practice with his new team. Jefferson said Williams had no trouble adjusting to the system and didn’t make any mistakes on the court with his teammates on Wednesday.

Williams, who scored 52 points in a game last month against Indiana, said it’s his job to make sure the Hornets are in position to reach the playoffs by this time next month.

“Kemba is out and that is a big part of our team and we are trying to hold the fort down until he gets back and we’re at full strength,” Williams said. “The playoffs are the only goal and we can make some noise in the East. With our roster we feel like we can play with anybody in the East.”

Jefferson said this year’s team is better than the one that won nine of its final 10 games last season to finish the regular season 43-39 before being swept in the first round by LeBron James and the Miami Heat.

He said players like Gerald Henderson and Kidd-Gilchrist have improved, and Williams brings another scoring threat.

“Now we have to do what we did last year and finish strong,” Jefferson said.

Clifford said the key in the next few weeks will be getting back to playing solid defense.

The Hornets had the best defense in the league since Jan. 1 before dropping three games entering the All-Star break, allowing two of their opponents to score more than 100 points.

“We didn’t defend at all and it cost us,” Clifford said. “We can’t go four minutes without rebounding or playing defense.”