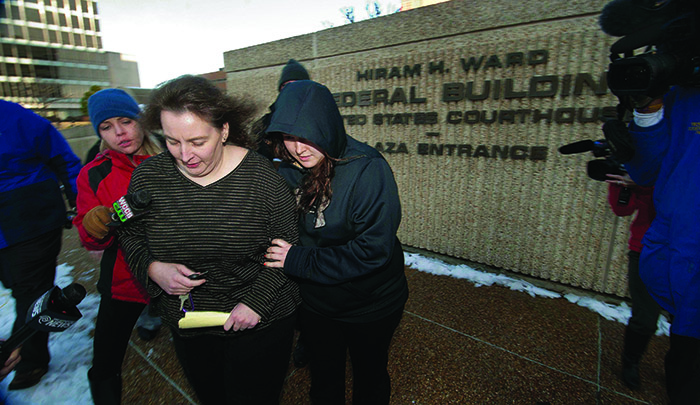 JON C. LAKEY / SALISBURY POST Casey Parson (left) and her daughter, Brook (right) head to their car after finishing up in federal court in Winston-Salem on Wednesday. Casey and her husband Sandy Parsons (not pictured) were attending a sentencing hearing on federal fraud charges for the adoptive parents of Erica Parsons. Sandy and Casey Parsons face prison for continuing to receive benefits for Erica after she went missing in 2011. The case will resume next month.

A federal prosecutor in the Casey and Sandy Parsons sentencing hearing made a bold declaration in court, leading to the belief that the couple’s missing adopted daughter, Erica Lynn Parsons, is dead.

The couple faces prison time for accepting health care and adoption benefits for the teen, who had not been living with them.
Casey Parsons pleaded guilty in September to 15 counts of a 76-count indictment and Sandy Parsons was found guilty in October of 43 counts.
A judge continued the sentencing hearing until March 27, so that he can hear more details regarding the abuse of Erica Parsons.
Judge Thomas Schroeder heard from family members, including Casey and Sandy’s biological son, Jamie, as well as Casey’s sister, Robin Ashley.
Jamie Parsons told law enforcement on July 30, 2013, that Erica was missing. He told investigators he’d not seen his sister since about November 2011.
Prosecutor Anand Ramaswamy spoke of Jamie Parsons’ testimony and then said “Erica is no longer alive. There is an agreement between Casey Parsons and her husband to not report the death.”
He said there was an absolute absence of record of Erica Parsons during the time Casey and Sandy were still accepting money for the girl.
“The reason is she’s no longer alive,” Ramaswamy said.
Sandy’s attorney, John Bryson, said bad parenting didn’t rise to the level of criminal conduct.
“A lot of this relies on the testimony of Jamie Parsons,” Bryson said.

Abuse and Neglect
Soft spoken at times, Jamie Parsons, recounted horrifying details of how Erica regularly suffered abuse at the hands of his parents, his siblings and himself.
He said he physically abused Erica from the time he was five until he was 16 years old.
Jamie said he stopped because he simply didn’t want to hit Erica anymore.
The youngest two children — Sadie and Toby — were also encouraged to abuse Erica as well.
Jamie Parsons said on the witness stand that his mother told Sadie and Toby if Erica would not play with them then they should pull her hair and “make her play with them.”
He said Sandy punched Erica and Casey once broke the child’s fingers bending them back as punishment.
Instead of taking Erica to a doctor, Casey created a cast for the girl.
He testified that Erica had a bald spot on the top of her head where scabs had formed and healed from being struck in the head.
Jamie said Erica ate dog food when not fed by her adoptive parents.
Jamie Parsons said Erica was locked in the closet of their home as a form of punishment. When asked which home, Jamie responded by saying all of them. The family lived in Rockwell, China Grove at Sandy’s father’s home and most recently, Miller Chapel Road in Salisbury, a home which was repeatedly searched by law enforcement and K-9 search dogs.
Jamie said his mother placed a hook lock on a closet door, which he described similar to a screen door lock, to keep Erica inside.
If Erica defecated or urinated while in the closet then she was punished further.
The closet was inside Sadie and Toby’s room that later became, daughter Brooks’ room.
According to Jamie, he told Shirley Stone, his grandmother, in February 2013 that he’d not seen Erica in some time.
She did not report the child missing. Jamie would go on to report Erica missing five months later.
The last time he saw Erica, Jamie said, she was pale and looked like a “zombie.” He said when Erica told Casey she didn’t feel well, the woman told her to shut the (expletive) up.
The next morning Casey and Sandy left home early, but when they returned, Sandy looked “sick,” but Casey “acted normal,” Jamie said.

Murder charges
The attorney said Rowan County Sheriff’s investigators haven’t been able to bring charges against the couple.
“The people who have decided to prosecute this as a crime, they have not done so,” said Bryson, Sandy Parsons’ attorney.
He said investigators don’t feel as though they have enough because a lot of the information stems from Jamie Parsons testimony.
The attorney said no charges were filed in Rowan County despite the Rowan County law enforcement making every effort to interview witnesses.
Sandy’s brother, Scott Parsons, told investigators his nephew, Jamie, was a compulsive liar.

Surrogate
Amy Miller, who hired Casey Parsons as a surrogate, told the court she and her husband met Casey in 2000 through a surrogacy website. They corresponded electronically and then by phone.
The Millers agreed to pay Casey Parsons $10,000 in monthly installments that Casey said would go to her church as a charitable contribution. However, Casey Parsons told Miller she needed a washer and dryer and so the first payment and subsequent payments went directly to the Parsons.
Miller said Casey lied to her and said she’d miscarried the baby.
When Miller tried to speak with Casey she refused to talk about the miscarriage.
Casey changed her phone number, but Miller would not believe her child was dead.
“She went from a loving, kind woman to a terrible vicious person,” Miller said of Casey Parsons.
Casey told her sister, Robin Ashley, she could have the Miller’s baby for $10,000. Robin began questioning whether the Millers really did tell Casey they didn’t want the baby as Casey had said.
Robin said she went online and sought out Amy Miller.
Miller eventually got law enforcement involved and was able to get her baby back immediately after his birth.

Robin Ashley
Ashley told the court Erica was always being punished and her sister Casey admitted she abused the girl.
Casey made Robin take Erica because she couldn’t bond with the girl, Ashley testified.
Ashley said Erica reminded Casey of Carolyn Parsons, Erica’s biological mother.
Casey said she did not want to abuse Erica so that’s why she brought Erica for her sister to take care of, Ashley said.
“She said she didn’t want to kill her,” Ashley said.
Ashley said Erica was treated “like a slave.”
She suspected Erica’s fingers were broken at one point because they were crooked. Casey told her sister Erica had arthritis.
In the beginning, Erica called Casey and Sandy “mom” and “dad,” Robin said, but then Casey made her call them by their first names or “aunt” and “uncle.”
Ashley said in the beginning of their relationship, Sandy was the “leader” and then when Erica went missing their relationship changed and Casey became the dominate one.

Janet Parsons
Janet Parsons, the stepmother of Sandy Parsons, told the court about a time when the family went on vacation to the beach and left Erica behind. She said Erica was told to hide and not tell anyone she was in the house.
William Parsons, Janet’s husband and Sandy’s father, found Erica home alone.
“I always thought Erica was not treated as kindly as the others,” Janet said.
“She was like a Cinderella,” she said.
Once Sandy and Casey are sentenced it is up to the judge to allow them the opportunity to turn themselves in at a later date or have them taken to prison immediately.