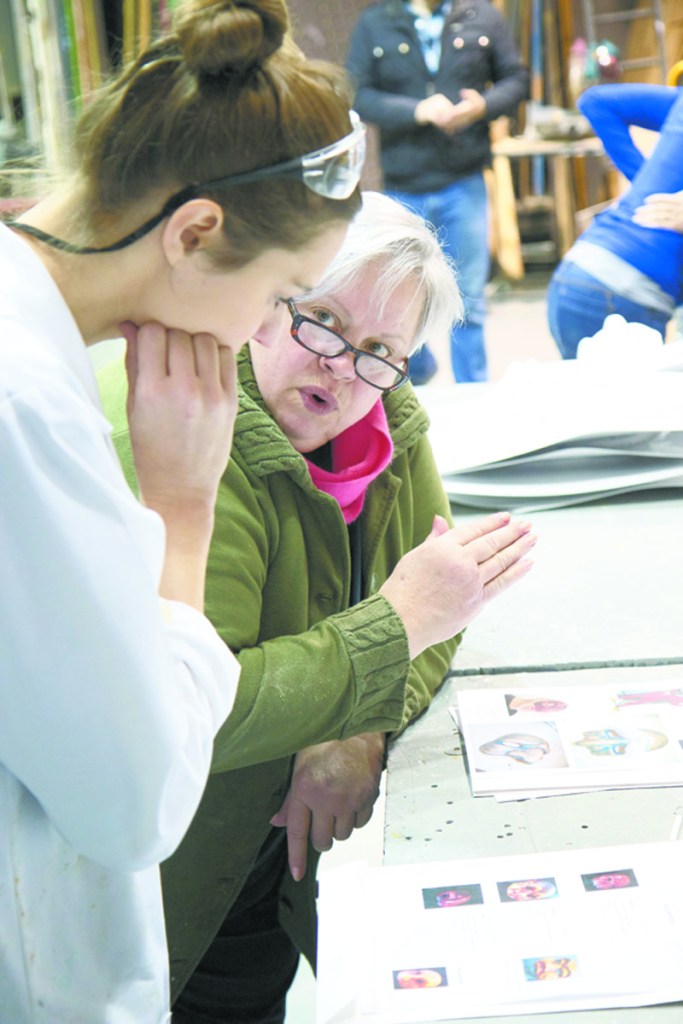 Anderson didn’t personally choose this play as the last one she would direct in her 34-year tenure, but she says it is more than fitting.

“It’s the best show we could choose to include in our season, for our department, for our students and our faculty, and I got the largess of it all,” she says, smiling.

The show has given her a chance to collaborate with her colleagues, including one of her former students, Meredith Fox, who has returned to her alma mater as a theatre arts faculty member after earning her master’s of fine arts at Accademia dell’Arte in Arrezo, Italy.

It was Fox, Anderson explains, who suggested that masks be used in this production, in the tradition of Italian Commedia. Fox also assists Anderson in directing the Lazzi and Commedia Movement for characters in “Comedy of Errors.”

Mask-making for the production required all hands on deck. Anderson found a video of a mask-making technique that used a simple vacuum form machine to make children’s Halloween masks. That video prompted her to suggest that she and her theatre arts colleagues build their own vacuum form machine and adapt that technique for creating their show masks.

That is exactly what they did – shop manager Craig Kolkebeck and theatre arts professor and chair Christopher Zink built the machine. Catawba art professor Ashley Pierce made some clay noses, cheeks and brows and assisted the cast members in sculpting other shapes out of soft clay. Theatre arts professor David Pulliam coordinated two days of mask-making workshops with the department’s students.

The results she saw gave Anderson some moments of insightful reflection – she located a plaster of Paris mask of her face that she had made over 30 years before for use in a production of “The Madwoman of Chailotte.” The differences and similarities between this mask and the masks created for “Comedy of Errors” caused her to consider time and its passage.

“It’s me, but it’s not me,” she says of her 30-year-old mask. “It’s the youthful me and a reminder of how much we change not just on the outside, but on the inside over the decades.”

“I would not give up a wrinkle or a scar because the physical is fleeting. ‘Comedy of Errors’ deals with time and how slippery it is, and witchy it is, and how it slips back on itself and begins again,” she added.

Noting that a large clock on stage is the only scenic element used in the upcoming production, she paraphrases Shakespeare: “Time goes backwards and forwards, and you can’t depend on it to measure your life.”

“No, I did not choose this production (to be the last she directs at Catawba), but I got chosen. It’s almost like I got schooled.”

“As long as you learn as much from your students as you try to teach them, that sustains you. I have had a fulfilled life in theatre – it’s had my heart for all of this time. It’s not a romantic life at all. It’s gritty and tough, and worth sticking with, like everything worth having.

“I’ve never regretted a single moment I’ve spent in the pursuit of theatre and I cannot say that about anything else in my life. Theatre is elusive and it changes, and you change, and your vision of it is constantly changing. Theatre is the most public and the most personal of all the arts and every single show we direct is a journey into someone’s psyche and into a knowledge base we’re unfamiliar with.

“Theatre is an element of change and that’s what college is. People come whether audience member or students and they leave changed. What a blessing is has been for me to be a part of that.”

Although one chapter in her life is concluding, another will be unfolding when Anderson retires at the end of May. She will move from developing and training students in all aspects of theatre to raising and training K-9 companions for work as service dogs. She shares that a friend told her: “You’re just going to be doing exactly the same thing, but your new students will have fuzzy faces.”

For Anderson, it seems a bit more than that. She will be following in her father’s footsteps; he raised field dogs and she will be raising Labs and Golden Retrievers to work as service companions. “I can’t think of a better way to give back,” she says.

She will leave Catawba proud “of advances we’ve made for the female students in the Theatre Arts Department and at the college.” She will leave without sadness knowing that “every exit is an entry into another play,” and as if in satisfied conclusion, she firmly quotes Babe, the pig: “That’ll do.”

Anderson joined the faculty in Catawba Theatre Arts Department in 1981. A specialist in performance theory, she is most recognized for her work with actors who are just beginning their performance art, particularly women.

As a director, more than 50 percent of Anderson’s productions have been at Catawba where she has offered students a wide and meaningful range of performance opportunities. Honored by Catawba College for her pedagogical skills and creative teaching, she was awarded the Swink Award for Classroom Teaching in 1998. She was inducted into Catawba’s Blue Masque Hall of Fame in 2012.

Catawba Theatre Arts alumni are invited to attend the show’s Feb. 26 performance to pay special tribute to Anderson for her service to the college.