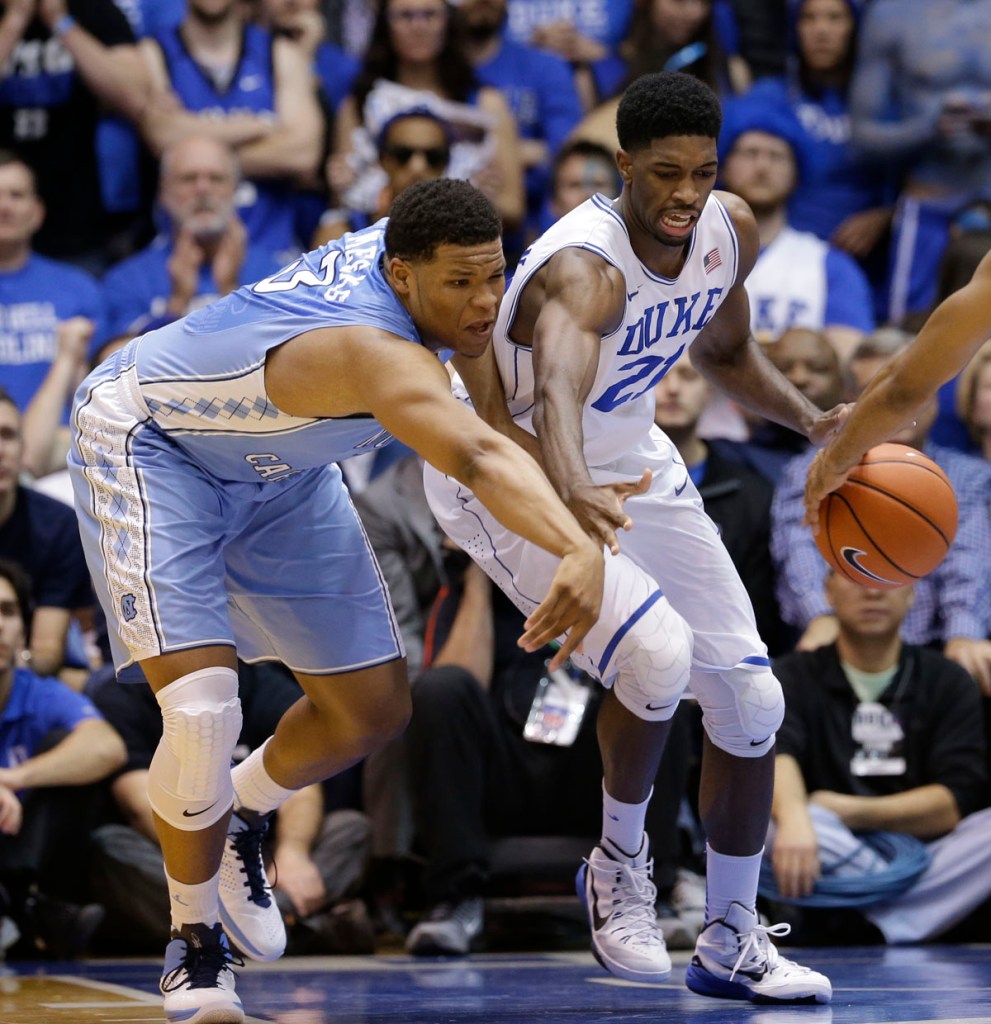 The Associated Press Duke's Amile Jefferson, right, and North Carolina's Kennedy Meeks, left, reach for the ball during the first half Wednesday. The Tar Heels led the Blue Devils by seven points with less than two minutes to play, but they lost to Duke 92-90 in overtime. It was the Tar Heels' fourth loss in the last five games.

The Tar Heels have lost four of five after sitting near the Atlantic Coast Conference lead in late January. They’ve twice blown double-digit leads when on the verge of winning on the road against highly ranked opponents — including their fiercest rival. They haven’t consistently defended well and are having trouble getting star guard Marcus Paige loose.

It’s left them in the awkward position of searching for positives in losses even as they acknowledge programs like this don’t play for moral victories.

“We’re still composed,” junior J.P. Tokoto said after Wednesday’s overtime loss at No. 4 Duke. “We’re still going to keep our composure. We’re not going to panic. We’ve just got to buckle down when it comes down to it.”

This wasn’t where the Tar Heels (18-8, 8-5 ACC) expected to be entering the final weeks of the regular season.

With Paige a preseason choice for all-American and league player of the year, the Tar Heels were picked to finish second in the league. And they were 7-1 in the ACC right behind Virginia and Notre Dame when they visited Louisville on Jan. 31.

The Tar Heels blew an 18-point second-half lead there and lost in overtime. They returned home two days later and lost to the Cavaliers and haven’t played at home since.

The Tar Heels lost to a hot-shooting Pittsburgh team last weekend. Then, in Wednesday’s rivalry classic, they controlled the second half with their best stretch of aggressive and full-effort play in weeks — only to blow a 10-point lead in the final four minutes and fall 92-90 in OT.

Their only win this month came against a Boston College team that’s 1-12 in the league.

After the Duke loss, the mood in Cameron Indoor Stadium’s cramped visiting locker room was a mix of hurt and frustration.

“Moral victories aren’t something we’re out here to get,” Paige said. “We played well enough to win the game and we didn’t quite make the plays we needed to finish it off. I don’t think we’re very pleased with just hanging in there. It’s not about just hanging in there or playing well against a top-five team.”

Paige was just as angry with himself. He finished with five points on 2-for-11 shooting — “I didn’t give them anything,” he said of his teammates — for his second straight single-digit output while facing constant harassment from Quinn Cook, who hit six 3-pointers and tied freshman teammate Tyus Jones with a game-high 22 points.

Duke’s backcourt domination was the difference on a night when UNC’s frontcourt kept Blue Devils star freshman Jahlil Okafor largely in check. And it’s been a recurring problem.

Freshman Justin Jackson has struggled to develop as a complementary wing scorer, and a banged-up Paige has frequently found himself trying to carry the load amid constant defensive attention — though Tokoto did shake free of his recent funk against Duke.

The Tar Heels must also get more from a defense that has allowed its past four opponents to shoot a combined 53 percent. Previous opponents had shot 37 percent.

They play their first home game in nearly three weeks Saturday against Georgia Tech, and they’re still within reach of a top-four ACC tournament seed that comes with a double-round bye.

“Some guys grew up tonight and some other guys have got to grow up tonight,” UNC coach Roy Williams said. “It’s a marathon, and in this league, it’s a tough marathon.”