Salisbury has deep connection to ‘three shots heard round the world’ 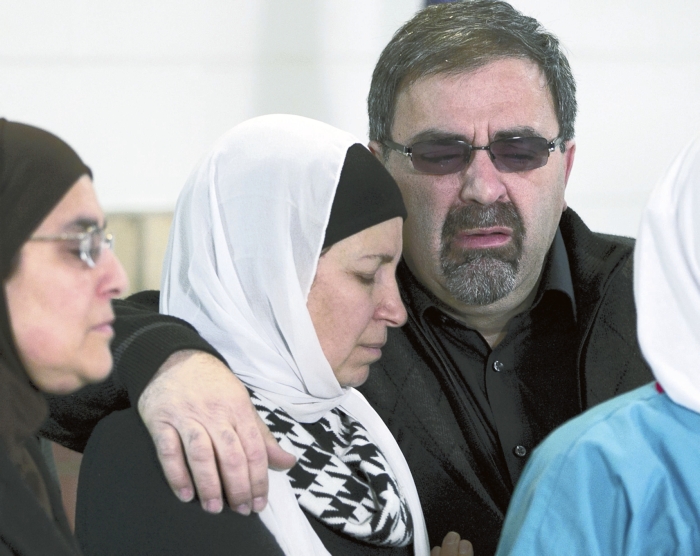 Namee Barakat, right, embraces his wife Layla Barakat during a news conference on Wednesday, Feb. 11, 2015, in Raleigh, N.C. They are the parents of Deah Shaddy Barakat, a doctoral student at UNC-Chapel Hills School of Dentistry who was killed Tuesday in Chapel Hill, N.C., along with his wife Yusor Mohammad and her sister Razan Mohammad Abu-Salha. (AP Photo/The News & Observer, Robert Willett) MANDATORY CREDIT

SALISBURY — On Christmas Day, Deah Barakat called the Salisbury home of Joanne and Jack Eichelberger and wanted to give them a personal invitation to his wedding two days later.

Deah and the love of his life, Yusor Abu-Salha, were getting married.

The Eichelbergers’ son Rob and his family were in town from St. Louis, and Deah wanted the couple to know that Rob’s clan was welcome, too. Joanne thanked Deah for the invitation, but she was worried about the 6 p.m. time of the Raleigh wedding and knew how late the day probably would be.

She expressed her deep regrets to Deah, because the Eichelbergers loved him and his family dearly. Now that he was 23 and a dental student at the University of North Carolina at Chapel Hill, Barakat felt he wasn’t being disrespectful calling  Joanne “Nana” and Jack “Jiddah,” his Arabic word for grandfather.

“Had I known Christmas was the last time I would have talked to him,” Joanne says, “I would have made sure to have been there. But I’m glad then I didn’t know.”

In the early evening of Feb. 10, Deah Barakat, his wife, Yusor, and Yusor’s sister, Razan Abu-Salha, were shot execution-style in the couple’s Chapel Hill condominium. Razan, a student in the N.C. State College of Design, was visiting Deah and Yusor.

The three shooting victims were 23, 21 and 19, respectively.

The grief the Eichelbergers feel over the senseless killings seemingly has been multiplied worldwide. Vigils were immediately held across the country, and people of all faiths and ethnic backgrounds have come together to mourn— and celebrate — three shining lights.

If you watch videos made of these three young people, hear testimony from their friends and see how the tragedy has brought people together, you somehow hope their deaths have not been in vain.

That’s what the Eichelbergers are hoping, too.

“Those three shots were the shots heard round the world,” Joanne says.

The Eichelbergers traveled to Raleigh Saturday night to be with the Barakat family and attend an interfaith service, where Yusor and Razan’s father told those in attendance to remember that, yes, they were of Muslim faith, but  the young adults slain also were proud to be Americans.

The Eichelbergers knew this to be true.

“Their families are so supportive of this country,” Joanne says.

The Barakat family has a strong connection to Salisbury. Back in the early 1980s Deah’s uncle Najib worked as a sales representative in Saudi Arabia for Power Curbers, a Salisbury-based business.

Joanne was working in the accounting office of Power Curbers at the time. “I knew him over the phone before I met him,” she says. “We became friends.”

Two of Najib’s younger brothers, Nabeg and Namee (Deah’s father) left their home in Syria to receive their college educations in Texas.

Because the space industry was slowing down and didn’t afford job opportunities, Nabeg moved to Salisbury and became a field service engineer for Power Curbers.

When Namee graduated from school, he also moved to Salisbury to be close to his brother. Namee and his wife, Layla, lived in the Lakewood Apartments.

Jobs were scarce at the time, and Namee, who had a business background in school, became manager of a Hardees restaurant in Salisbury.

Namee and Layla stayed here a couple of years before moving on. Their first child, Suzanne, was born at Rowan Regional Medical Center. She is now 28 and a doctor in residence at a San Francisco hospital.

Meanwhile, Nabeg and his wife, Rima, lived in Salisbury until about 16 years ago., Joanne says. The Eichelbergers and Nabeg Barakat’s family lived close to each other in Eagle Heights and became close friends.

The extended Barakat family ended up living in the Triangle area, and it became a tradition for the family members to gather together at someone’s house every Saturday night.

Joanne says up to 60 people sometimes attended the Saturday night affairs, and she and Jack often were guests. If the Eichelbergers stayed over, Nabeg Barakat had a bedroom ready for them at his house.

Through the years, the Salisbury couple came to know everyone in the Barakat family, including Deah, and through him, Yusor.

As you know by now, the media narrative since the shootings has focused on whether the killings were a hate crime or, as the Chapel Hill Police Department first suggested, a disagreement over parking spaces outside the condominiums.

The Barakat and  Abu-Salha families have made it clear — and much of the anecdotal evidence and crime scene support their contention — that the killings weren’t about parking spaces.

Suzanne Barakat has said in nationally televised interviews that to call it a parking dispute is outrageous, insulting and trivializes the murders.

“They want justice, not revenge,” Joanne Eichelberger says of the family. “They make that clear every time they speak.”

Deah and Yusor’s 46-year-old neighbor, Craig Stephen Hicks, has been charged in the murders.

Deah Barakat and Yusor attended N.C. State University as undergraduates. Deah was in his second year in UNC’s dental school. He also was organizing and raising money for a second mission trip this summer to Syria to provide dental care to Syrian refugees now in Reyhanli, Turkey.

“Project: Refugee Smiles” planned to take 10 dentists, including Deah, to Turkey to provide extractions, fillings, root canals and dental hygiene for the refugees. It also was supplying toothbrushes and toothpaste.

A video in which Deah explains his mission trip is posted on a special Facebook page for the three victims named “Our Three Winners.”

Joanne says Deah’s uncle Nabeg Barakat also had established the Syrian Foundation for Needy Syrians and had taken trips to Turkey with medical supplies and clothing for the refugees.

“Deah was helping so he could eventually take over that as well,” Joanne says.

Joanne says a dentist from Texas spoke with Nabeg last week and explained he had closed his office for two days so he could attend the funeral for the young adults. He had heard of what Deah was doing for the Syrian refugees and promised he would not only support the mission trip monetarily but he was going to do everything he could to be one of the dentists going.

It’s hoped the mission can become an annual event in Deah’s memory.

Joanne Eichelberger says she and Jack also were touched Saturday night when a representative of the Turkish embassy in Washington stood and read a proclamation from the president of Turkey.

Though the Eichelbergers could not attend last week’s funeral, Joanne heard an anecdote Saturday night that she couldn’t forget.

“It was a poetic moment as the three were being buried,” she says. “For just a moment, the sky opened up, and it began to mist just a little bit of rain. This gentle mist turned into a very light and brief shower of pure white snow flakes.

“An uncle looked into the sky and remarked, ‘Look, the sky is crying for them.'”