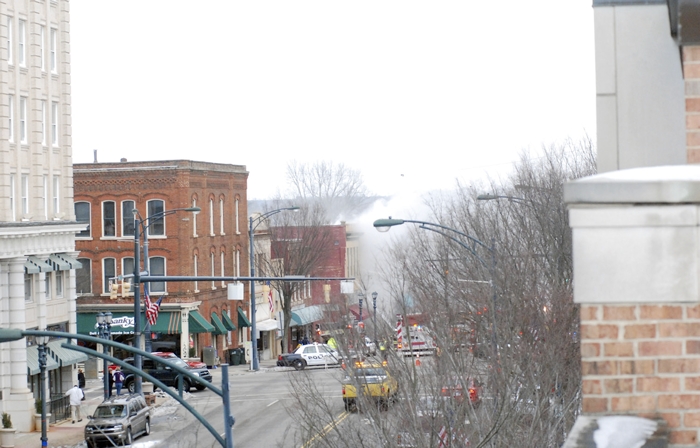 Salisbury Fire Department crews concentrated their efforts toward containing fire in the second story of the 1921 building. Heavy smoke and fire were coming from the second floor when firefighters arrived.

As of 4:30 p.m., the fire seemed to be under control and not a threat to buildings on either side, which share common walls. The Simply Good health food store is immediately next door, and Rent-A-Center is two doors away.

Fire departments from as far away as Charlotte responded.

No injuries were reported in the blaze, said Salisbury Fire Chief Bob Parnell.

It was a three-alarm fire, according to Parnell. It was immediately declared a two-alarm fire because of its downtown location, Parnell said.

Firefighters said the fire was focused, and potentially started, in the center of the building, according to Parnell. He said the center of second story’s floor had “burned out.”

Oscho Rufty, whose family once owned the general store building, watched the scene unfold from the sidewalk nearby. “It’s a lit bit emotional,” said Rufty, who worked at O.O. Rufty’s for 21 years.

Rufty and his nephew Geof Wilson still own the buildings on each side of Okey Dokey. Rufty said the whole row of structures was built in 1921 and the common walls between them are probably 18 to 24 inches thick.

Rufty worried that all the water being poured on the second floor would be falling through to the first floor and causing significant damage. He actually still owns the front sales counter in Okey Dokey and hoped he could donate it someday to the Rowan Museum.

Rufty said he was impressed by the Salisbury Fire Department’s organized attack on the fire and said the city was fortunate “to have a fire department like we have.”

“I give them kudos,” Rufty said.

The fire attracted many spectators, including those people watching from storefronts across the street.