Power out overnight for some, officials warn roads will be icy again tonight 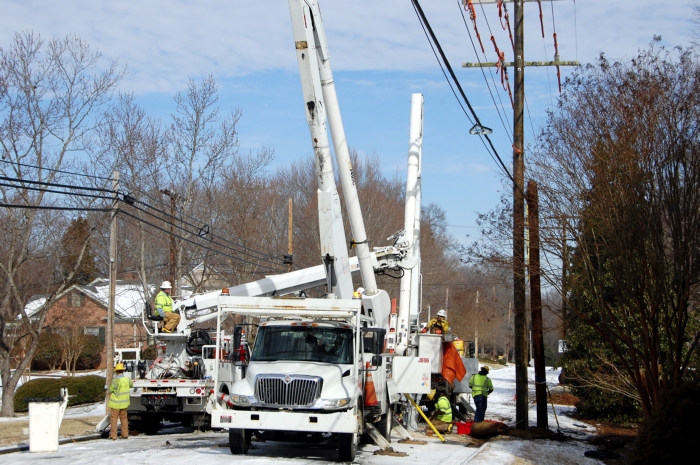 A utility pole on Old Mocksville Road had to be replaced after a pickup truck hit it Monday evening. Power was cut off around 2 a.m. and restored Tuesday morning. The pole that was damaged can be seen next to the new one.

Hundreds of Duke Energy customers had their power cut off during the early morning hours Tuesday while crews replaced a utility pole on Old Mocksville Road.

A pickup truck hit a pole near the corner of Old Mocksville Road and Hickory Drive around 7 p.m. Monday.  Residents in the area said the driver of the pickup was OK, but crews were out all night replacing the damaged pole and power was cut off around 2 a.m while the new pole was installed — power was back on by noon Tuesday.

Novant Health Rowan Medical Center lost power momentarily after the truck hit the pole, but the hospital’s generators came on and there were no problems, according to a Novant Health spokeswoman.

The sound of generators could be heard Tuesday morning in the neighborhood near the broken pole.

Pamela Thompson lives on Old Mocksville Road and said she boiled water on her fire place this morning to make coffee. She had brought her dog, a Siberian husky named Captain, outside while she checked on the utility crew’s progress.

He loves this kind of weather, she said about Captain.

“We can do without power for a little while,” she said.

The main roads, such as Statesville Boulevard and Innes Street, around Salisbury were in good condition Tuesday morning. As for the side roads, some were better than others, but most seemed drivable. More traffic was on the roads as morning turned into afternoon.

During a conference call Tuesday morning, officials from around the county said they expect roads to refreeze again tonight as the temperature drops into the teens.

Salisbury City Council postponed its meeting planned for Tuesday afternoon to Wednesday at 4 p.m due to conditions caused by the winter storm.