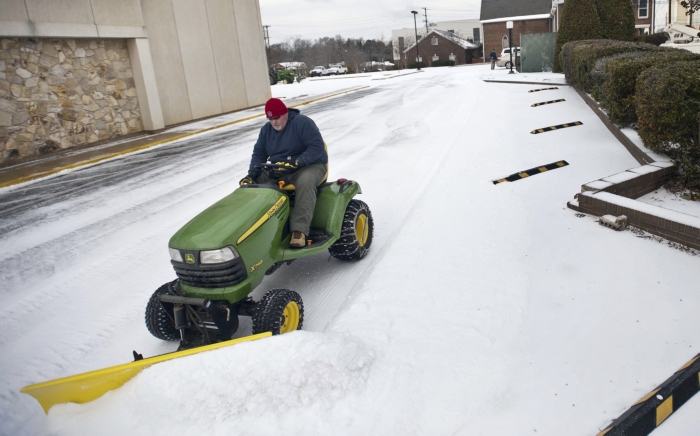 There were a small number of traffic incidents overnight, emergency responders said, but no major accidents were reported. However, responders do caution against travel because of the icy road conditions.

County officials held a conference call this morning to discuss the overnight conditions and how they’ll prepare for Wednesday.

Crews with the N.C. Department of Transportation continue to clear roads and said, hopefully, the sun today will help melt some of the ice.

“With these dipping temperatures, it’s going to be extremely hazardous at night. The stuff that falls during the day will refreeze tonight,” said Kevin Neal, county maintenance engineer.

Neal said county roads will not get de-icing or salt treatment, but they will get plowed.

“We do not have the capacity to de-ice (county roads),” Neal said.

He said tonight, DOT crews won’t be able to do much but slide around. However, they’ll be the most effective tomorrow.

“We hope to get as much as we can while we can so there’s less and fewer places that have issues,” Neal said.

The Salisbury Police reported four accidents, all of which were minor. The N.C. Highway Patrol reported 47 traffic incidents, all were minor, officials said.

First Sgt. E.T. Suttles said most of the traffic crashes were attributed to people driving too fast for conditions. He cautioned motorists to drive slower than the posted speed limit to reduce the chance of a collision.

Monica Bruns, disaster program specialist, with the Hanford Dole Chapter of the American Red Cross said the office had gotten a number of calls between 4 a.m. and 5 a.m. following a power outage at Old Mocksville Road and Mahaley Avenue.

There was a truck that hit a pole that knocked out power in that area. Residents were calling the Red Cross office looking for a place to get warm.

Bruns said during the conference call there may not be a need for a shelter, but she’d like to have a warming station set up. The warming station would be merely a place for people to get warm. Red Cross volunteers would provide warm drinks for those who would need a place.

The decision was made to have a warming station on standby tonight and make one available tomorrow evening.

Officials said there was a power outage, but the hospitals’ generator took over the load. There were no issues reported. Crews have been clearing the parking lots and access points.

The Rowan-Salisbury School System is working to determine what it will do if the weather does not improve. System Superintendent Dr. Lynn Moody said she plans to meet with the school transportation staff and others who are instrumental in helping to determine whether there will be school including emergency management officials, highway patrol, as well as NC DOT officials.

The school system has not officially released its decision on school for Wednesday and the rest of the week.

Kannapolis City School officials expect to know later today about school for the rest of the week.

Check back for more updates.