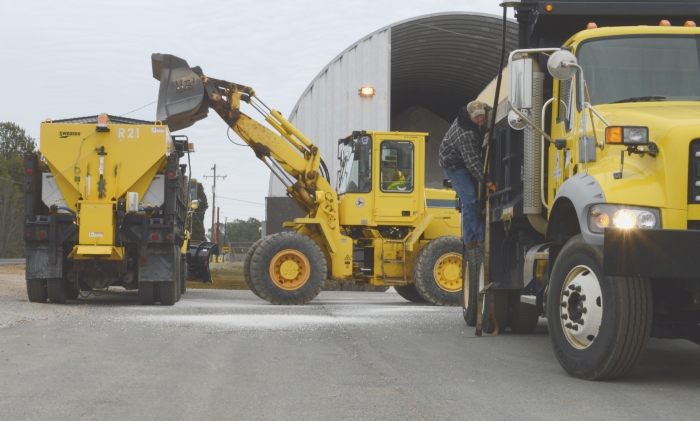 Rowan County’s public schools are closed today, and crews were working through the night on potentially icy roads as a winter storm moved through the region.

Officials with the Rowan-Salisbury Salisbury School System decided early Monday to cancel Tuesday’s classes due to the threat of icy roads as a result of freezing rain that was expected throughout Monday night and Tuesday morning. District offices are closed today as well. The make-up day has been set for March 26.

North Hills Christian School will be closed Today, and Catawba College will open at 11 a.m.

There were no classes Monday because it was President’s Day.

N.C. Gov. Pat McCrory issued a state of emergency declaration Monday ahead of the storm.

As the day went on Monday, the National Weather Service’s forecast for Rowan County called for snowfall and ice amounts to be less than initially expected. Still, up to 1 inch of snow was forecasted for late Monday afternoon with between 0.2 and 0.4 inches of ice accumulation overnight.

Light flurries of snow, along with some sleet were seen in parts of the county Monday afternoon. Overnight lows were expected to be in the mid 20s. Today’s forecast calls for highs near 40 degrees with cloudy skies this afternoon.

Officials from around the county held a conference call Monday morning to discuss preparations for the storm.

Frank Thomason, Rowan County’s Emergency Management chief, said the threshold is 0.25 inches of ice accumulation in order for damage to power lines and trees to be likely.

Thomason said the county’s emergency-management team would continue monitoring the situation through Monday night and make decisions as necessary. If a large number of people lose power, shelters will be opened, he said. Which shelter sites are activated would depend on where the power outages are located.

Thomason said the local media will be notified if a shelter is opened and people should monitor the news to find out where shelters are located.

Officials planned to hold another conference call today at 11:30 a.m.

The state’s Department of Transportation had 1,300 workers and nearly 500 trucks distributing more than 1.3 million gallons of salt brine across the state’s roadways Monday.

The state’s Highway Patrol is asking people to avoid traveling unless necessary during the winter weather. People can check road conditions at www.ncdot.gov/travel.

If people lose power at their home, they should contact their power company to alert them of the outage.

A Duke Energy official said people who have special medical needs at their home should notify the company about their situation when reporting a power outage.

People with emergencies should call 911.

Salisbury prepares for aftermath of storm

The city of Salisbury had crews working through the night Monday in anticipation of icy roads.

Parnell said the city has 200 tons of sand, 50 tons of salt and 20 tons of a sand-salt mix to use on roads. It also has 4,000 gallons of diesel fuel in reserve for its generators and emergency vehicles.

If the city’s snow removal plan is put into operation, Parnell said, the primary routes will be to and from the hospital.

He said if someone has a waterline that bursts at their home or business and they can’t get it to shut off, they can call the city at 704-202-0070 and city workers can come and shut it off at the street connection.

Monica Bruns with the county’s Red Cross chapter said volunteers are ready to help those who need it in the aftermath of the storm.

If shelters are opened, Red Cross volunteers will staff them, and they can also bring blankets and toiletries to people who don’t have a heat source at their home.

Meals, snacks and water would be available at the shelters, Bruns said. Nurses and medical staff would also be on call for people who need assistance.

The Red Cross can be reached at 704-633-3854. After business hours, people can dial extension 107 to leave a message for Bruns, to which she will be alerted.