Comfort foods bring back the memories 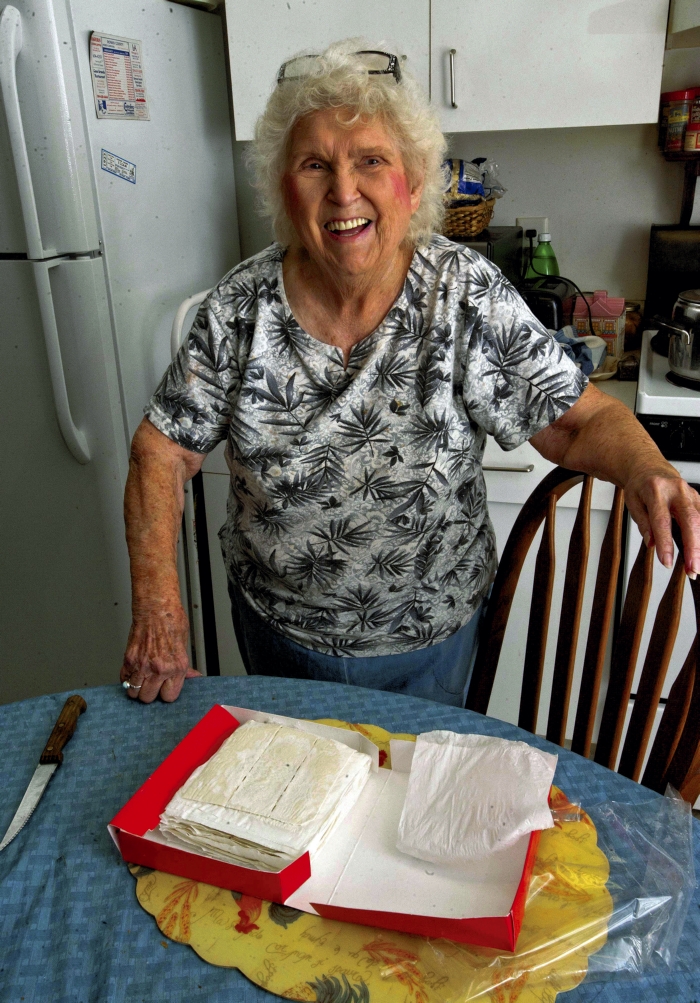 The unrelenting winter weather has led many people to want to curl up under a blanket and have a big plate of comfort food.

To some, that’s a great, big, fluffy blob of mashed potatoes, with plenty of butter. Or maybe a steaming bowl of rich macaroni and cheese.

Chicken and dumplings makes the list, too — nothing too complicated in flavor or preparation. We need to fill our bellies and warm our hearts.

You couldn’t get much more comforting than Chris Caudle, a 91-year-old who says she gets comfort out of making her chicken and dumplings as much as from eating them.

We caught up with her last Tuesday, right after she put chicken thighs in a pot to make a batch of chicken and dumplings. She was going to ask a neighbor over for supper.

Her well stocked kitchen shows she enjoys cooking, though she doesn’t do it as much as she used to. She’s got a couple of slow cookers, a hand mixer, a shelf of spices.

“I use to roll out all that dough. This is so much easier and it tastes good.”

She remembers her mother rolling out strips of dough and hanging them from her arms to stretch them out before putting them in the boiling stock from a cooked chicken.

The key is cooking the dumplings about 20 minutes, and then, she demonstrated with a shake of her body, they shimmy down in the liquid and fluff up.

She leaves enough fat on the chicken to make it taste good and adds only salt to her water.

Several folks left their ideas of comfort food on my Facebook page, ranging from plain elbow macaroni with butter and salt (a go-to when you’re feeling poorly) to two-day Brunswick stew, with a lot of other ideas in between.

Two folks sent in recipes, one for White Chicken Chili, and the other Caudle’s chicken and dumplings.

There is a small debate on what dumpling means. In the South, it’s strips of dough cooked in chicken broth.

Other places, it’s like a small biscuit on top of the broth. Either way, it’s delicious.

A story in the New York Times discussed research into comfort foods.

The bad news — there’s really nothing in mac and cheese or even Oreos that actually makes you feel better, except that eating what you like may improve your mood.

Kelly Brownell, dean of the Sanford School of Public Health at Duke University, says the relationship between comfort and food may not exist.

It’s all about food that gives you pleasure, or makes you feel better. It’s steeped in ritual, memory and taste and highly personal. Post photographer Jon Lakey conjured up a powerful memory of corn bread soaked in buttermilk. He can remember the sound of a hot piece of cornbread, one that was fried, hitting the buttermilk and the feeling of the hot bread and the cold milk in his mouth. His mother passed away years ago, but that memory brings her right back.

I remember being in the kitchen with my Granny. She’d be cooking a roast for dinner and we’d have bread-and-butter sandwiches with milk. White bread, sweet butter, cold, rich whole milk. The same milk and butter that went into her riced mashed potatoes. Thanks, Granny.

So if that’s all comfort food is about, it’s still comforting. It helps us remember good times and people we miss and that’s worth more than anything.

Brenda Zimmerman  — One of my favorites…and still is now … If I was sick, my mom would make plain elbow macaroni with nothing but butter and salt. I have no idea why I thought and still think that is amazing when I don’t feel good…I guess it is bland and settles easily on your stomach…. my other is oyster stew…Jerry and I used to call each other at work (way before cell phones mind you) at the first sign of ice or snow to see who would pick up the oysters and milk…it was a traditional “first day of bad winter weather” meal for us…..sit curled up on the couch with a big mug and watch TV…perfection!

Marybeth White — Chicken wonton soup from Chopstix Thai. It has special herbs that will cure anything and lots of sauteed garlic which has antibacterial properties.

Ann Wicker — Pasta. These days I use either my own sauce or sauce from Pasta & Provisions. But it harks back to the days when my mother worked late and my job was to fix dinner with the Chef Boyardee spaghetti kit. The other one is pinto beans and coleslaw, which I have successfully replicated.

Kathy Graham Pulliam — the Brunswick Stew from my Grandmother Graham makes us feel warm and comforting in the winter. It takes two days to make but the end results are so rewarding. Grandmother used several meats but we just use chicken now and enjoy it just as much. The home canned tomatoes also give it a delicious flavor. I plan on making a batch this week when it gets very cold.

Liz Hood — Hurricane soup. Mother made a huge pot of beef vegetable soup when a hurricane was due to go through our area so that the linemen from the REA Co-op Dad started and ran, could come by the house to get at least a warm, if not hot, meal at any time of day or night. Dad would cut up a big chuck roast and mother would add any vegetables in the fridge plus a can of garbanzo beans, potatoes, carrots, green beans and a big can of tomatoes. There was always 4 or 5 loaves of Cuban bread to go with it. I still make Hurricane Soup yearly — just not such a huge amount.

Claudia Galup — Macaroni and cheese. My mother made it herself. My favorite part was the ever-so-slightly burned cheese on the the top. It still makes me feel warm and cozy.

Sylvia Andrews — For me it’s chicken and dumplings! But not the variety with the noodle strips – I’m talking the old-fashioned biscuit-y dumplings dropped from a tablespoon into the bubbling chicken broth. As they stew away doing their plumping thing (yum), bits of the batter also thicken up the broth to a most delightful gravy-like consistency. Thank you, Mama, for the memory …

Pat Gross — Really thick New England clam chowder. Well-brewed, steaming hot tea with honey. When we were sick, my mom made “soft eggs”: scrambled eggs with extra butter and milk, so it would slip down sore throats.

Karen Brown Ingram — My mom’s chicken noodle casserole. One time in college, my roommate and I were at my folks for the weekend and mom made it for us. We ate the entire casserole. In one sitting.

Diane Brand Hundley — Pot roast! Let me see a golden leaf and feel a chill in the air and it’s time for the dutch oven and a pile of onions. Mmmmm

Helen R. Little — My sister Priscilla Little Barger Hayes homemade rolls are one of the most heavenly delights I’ve ever tasted! Unfortunately I don’t have the recipe. They are melt-in-your-mouth delicious!