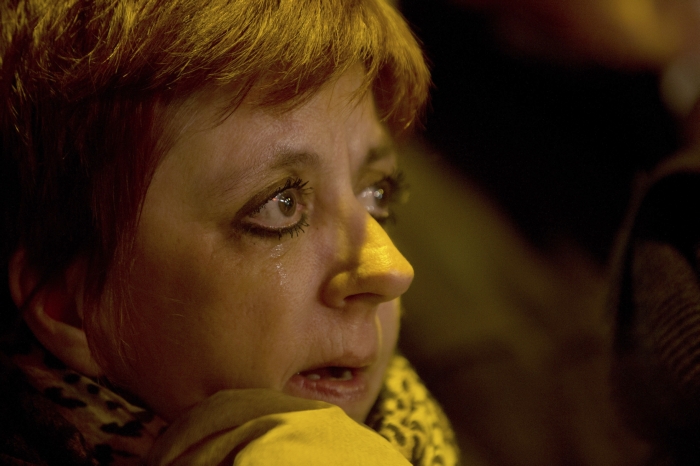 A woman cries as people gather during a memorial service in honor of the two men killed killed by a gunman over the weekend, at Oesterbro, near the Teater Building 'Krudttonden', the scene of the first attack, Monday evening, Feb. 16, 2015 in Copenhagen Denmark. (AP Photo/Polfoto, Finn Frandsen) DENMARK OUT

A federal judge is allowing a lawsuit by 26 states against the president’s executive order to proceed, derailing plans that could spare up to five million people from deportation; White House says Justice Department will appeal.

Ukrainian government troops and pro-Russian rebels fail to pull back the agreed weaponry from the front line.

The man thought responsible for Copenhagen’s deadly shooting attacks was released about two weeks ago and might have become radicalized there last summer, a source tells The Associated Press.

4. HOW THE GOP SUDDENLY FINDS ITSELF IN A BIND

Calls for increasing the defense budget are challenging Republicans who are divided over how to steer more money to the Pentagon without piling onto the deficit.

5. EGYPT CALLS FOR UN COALITION TO FIGHT IN LIBYA

The Egyptian president tells French radio that his country’s airstrikes against the Islamic State were in self-defense.

6. ON THE MENU FOR CHINESE NEW YEAR: MAINE LOBSTER

The steamed, whole crustacean is now a symbol not only of good-luck for the rising middle class China, but also of their new-found prosperity.

Seven years ago, jubilant Kosovars rejoiced in their independence from Serbia. Today, thousands are fleeing the young nation that many have given up on.

Japan’s pastel-colored “Tale of The Princess Kaguya” is a stylistic challenge to Hollywood’s computer-generated fare.

9. WHY LOS ANGELES AIRPORT PASSENGERS GOT INTO A PANIC

About 20 passengers fled through emergency doors and onto the tarmac at a Los Angeles International Airport terminal after someone mistakenly said that an armed man was on the loose.

10. WHICH DOG HAS FRIENDS IN HIGH PLACES