Sit-ins, marches: ‘It doesn’t seem that long ago’ 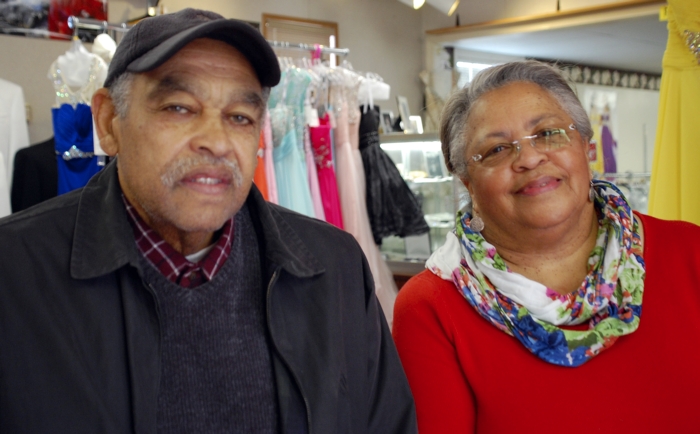 Mark Wineka/Salisbury Post As college students in the early 1960s, Aaron and Brenda Neely participated in civil rights sit-ins and protest marches, then later helped to integrate schools as teachers.

SALISBURY — You may not realize it, but today’s an historic anniversary in Salisbury.

On Feb. 16, 1960, three men wearing clerical collars walked into the Woolworth’s on South Main Street in Salisbury, sat at the lunch counter and waited to be served. Because they were black, they were refused service and walked out of the store about 10 minutes later.

The quiet sit-in drew a brief, front-page mention in the afternoon edition of that day’s Salisbury Evening Post. Salisbury’s sit-in at the Woolworth’s Luncheonette came 15 days after four N.C. A & T College students famously sat down at the Woolworth’s lunch counter in Greensboro and were not served because they were black.

The students kept going back, in bigger numbers and greater resolve, and the publicity they generated sparked hundreds of civil rights sit-ins and protest marches throughout the South  in the months and years to come.

Rowan County’s Brenda and Aaron Neely were in the middle of it, participating in sit-ins and marches as college students and in the integration of schools as teachers.

“Although it was about 50 years ago,” Aaron Neely says, “it doesn’t seem that long ago.”

Growing up, the Neelys, who married in 1967 and live off Corriher Gravel Road, experienced every kind of discrimination first-hand. They sat on the back of buses. They drank at “colored” water fountains. They attended segregated schools. They sat up in the balconies of segregated movie theaters and, at certain restaurants, they had to eat outside in the parking lot or pick up their food at the back door.

A native of Robeson County, Brenda Neely actually grew up in a place where the discriminatory practices came in threes, because Lumbee Indians also were victims of racism.

The schools, water fountains and theaters all were compartmentalized into whites, “colored” and Indian.

Brenda would go on to attend Livingstone College; Aaron, who graduated from the Aggrey School in Landis in 1961, headed for N.C. A&T. At each school, they attended sessions and received training in the art of disciplined and non-violent protesting.

Brenda Neely recalls that the Rev. Edgar French, her Bible teacher and advisor to the Student Government Association, instructed the students in how to respond to verbal and physical attacks. They acted out possible scenarios they might confront in their civil rights protests.

“We were told it’s going to be on our shoulders,” Brenda says of her generation. “We knew we wanted to make a difference.”

In one of the student protest marches from Livingstone College to the downtown, Brenda Neely recalls the students were told to wear black, stay close to each other, look straight ahead and always keep moving.

“I think it was against the law to stand still,” she says.

Outside of businesses such as Woolworth’s in Greensboro, students also knew they had to keep moving, so they would form circles of 15 or so students, walk for 15 minutes, then be replaced by a new set of 15.

In Greensboro one day, Aaron Neely found himself participating in a protest line with thousands of other young people,

To break up the massive crowd, authorities eventually moved in and started arresting the protesters. They loaded buses to capacity and transported them to the old Moses Cone hospital, which was being used as a holding facility, Neely says.

Law enforcement was required to take care of the physical needs of the people they were arresting, and they weren’t prepared for such large numbers. Aaron Neely was just a short distance from being hauled away and arrested that particular day before the authorities gave up.

He actually was a little disappointed.

Both Brenda and Aaron say their parents were not thrilled with their civil rights activities. The parents feared for their children’s safety above all.

“I would be the same way if my kids were doing it now,” Aaron says.

The Neelys met each other in Salisbury during their senior years in college and began their courtship. Both graduated from their respective schools in 1965 and took their initial teaching jobs at all black schools farther east — Brenda in Harnett County; Aaron, in Columbus County.

They moved to Rowan County in 1967 and helped to integrate the faculties of Rowan County Schools — Aaron at East Rowan High and Brenda at China Grove Junior High.

They are long retired as teachers, but Brenda owns and operates A Perfect Dress, a well-known place for prom dresses, wedding dresses and other formal wear.

On that same Tuesday, Dr. Martin Luther King Jr. was in Durham, visiting a Woolworth’s that was refusing service to blacks.

Other discount stores with lunch counters in N.C. cities also saw demonstrations because of their whites-only policy of service. Due to intense public pressure, Woolworth’s as a chain integrated its lunch counter in July 1960.

The Salisbury Woolworth’s closed in 1988. Today, a small section of the Salisbury lunch counter is on permanent display behind glass at the N.C. Museum of History in Raleigh. The display includes three bar stools, a “Visit Woolworth’s Luncheonette” sign and also, sitting on the counter, a sign that says “Lunch Dept. Temporarily Closed.”

Those counter signs were brought out when the white management did not want to serve blacks who sat down and waited for service.

The whole Woolworth’s lunch counter in the Salisbury store was 70 feet long with 35 stools. The Salisbury display has been in the N.C. Museum of History since 2011.

The Neelys worry that today’s children don’t know what sacrifices were made on the shoulders of others during the civil rights movement.

The Neelys still take a lot of pride in what they did as young adults in trying to right some wrongs, no matter how big or small their roles were.

And remember, they say, it really wasn’t that long ago.

Putting the ‘joy’ in Joynt Camp