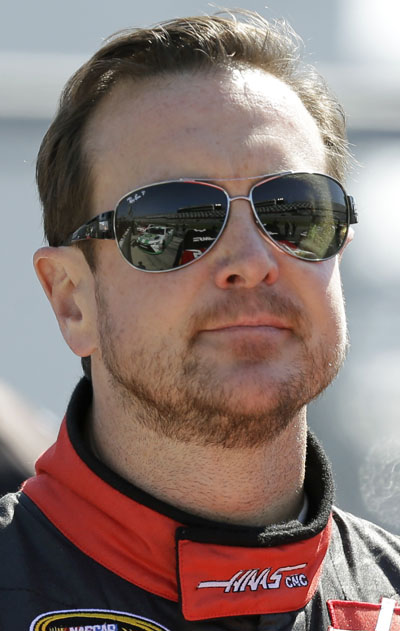 DOVER, Del. (AP) — NASCAR driver Kurt Busch was ordered by a judge to stay away from his ex-girlfriend Patricia Driscoll and not communicate with her.

The decision Monday by Family Court Commissioner David Jones comes after he held four days of hearings in December and January that included conflicting testimony from Driscoll and the driver known in NASCAR circles as “The Outlaw.”

The judge’s order, which is good for a year, says Busch can’t buy or possess firearms or ammunition and must be evaluated for “mental health problems related to anger control and impulse control.” It also orders him to stay 100 yards away from Driscoll except for “at NASCAR races and related events where closer proximity is required” for Busch to “perform his duties as a driver or sponsored athlete.”

Busch’s attorney, Rusty Hardin, released a statement Monday after the ruling saying he was “deeply disappointed” and intends to appeal.

“It is important to note that the Commissioner’s ruling is a civil family court matter and totally unconnected to any criminal investigation or finding. Regardless of the Commissioner’s finding, we know that Kurt never committed an act of family violence,” Hardin said in the statement.

Driscoll, 37, filed for protection in November, saying Busch assaulted her inside his motorhome at Dover International Speedway in September, grabbing her by the face and neck and slamming her head three times into a bedroom wall. She said she drove to Dover from her Maryland home to check on Busch after he sent several texts that led her to believe he might be depressed.

In addition to seeking a no-contact order, Driscoll filed a criminal complaint with Dover police. Police submitted the results of their investigation more than a month ago to the Delaware attorney general’s office, which has yet to decide whether to prosecute Busch.

Busch’s racing team also put out a statement Monday saying it takes the allegations seriously and that it is awaiting a decision by the attorney general’s office on possible criminal charges before deciding what if any action to take.

Busch, 36, has denied the assault allegations. He testified that he repeatedly told Driscoll to leave after she showed up uninvited and unannounced at his motorhome a week after he broke off their relationship. He said Driscoll demanded that he tell her son to his face that their relationship was over, and that she ignored his repeated requests to leave.

Finally, Busch said, he cupped Driscoll’s cheeks with his hand, looked her in the eye and told her once again that she needed to leave. A Dover police detective testified that Busch told him Driscoll’s head “tapped” the wall at that time.

Driscoll’s neighbor testified that she saw marks on Driscoll’s face and neck when she returned to her Maryland home several hours after the alleged assault.

Nick Terry, a chaplain who ministers to NASCAR drivers and who saw Driscoll at the Dover track immediately after the alleged assault, testified that he and his wife did not notice any marks on Driscoll.

Terry also denied Driscoll’s allegations that he had been threatened and offered bribes by Busch’s attorneys, who have portrayed Driscoll as a scorned woman out to destroy the NASCAR star’s career.

The Family Court hearing included sensational testimony in which Busch said he believes Driscoll is a trained assassin and a “badass” who could take him down at any moment if he tried to hurt her. Busch’s motorhome driver also testified that Driscoll told him she was a trained assassin for the U.S. government.

Driscoll, who runs a small Washington, D.C.-based defense consulting firm and is president of the Armed Forces Foundation, a nonprofit for veterans, says claims that she is a mercenary and hired killer are “ludicrous.” She suggested that they stem from a fictional movie script that she has worked on and which Busch proofread for her.