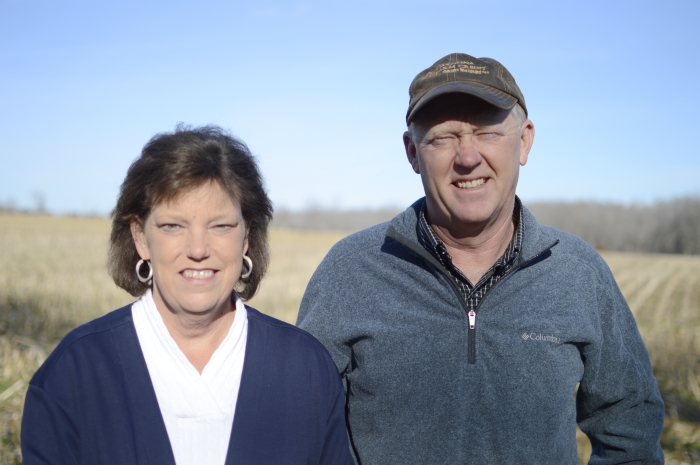 Farmer Ben Knox and his wife Angie Knox smile for a picture Friday outside of their home. Ben was recently named to the state's Soil and Water Conservation Commission.

The history residing on Knox Road will soon make its way to the state level.

As rich as the soil beneath its farm near Cleveland, the Knox family’s green thumb dates back nearly three centuries, making it decades older than most towns in Rowan County. Last week, Ben Knox, who grew up on the west Rowan farm, was appointed to the N.C. Soil and Water Commission. Knox currently serves as chairman of the Rowan Soil and Water Commission and has taken on similar roles on a regional level.

Knox said he’s excited and proud to be on the state commission. It’s was the first time he ran for the position. The governor’s confirmation, announced Friday, was needed to make the role official.

“It’s going to be eye opening,” Knox said. “I guess I’d say that because we’re overseeing a program that includes the whole state and it affects so many people in the state.”

Some of the farming practices that Knox says he’s passionate about include no-till farming and keeping a crop on fields year-round. The first — growing crops without disturbing or tilling the soil — is something the Knox family practices on the west Rowan farm, which grows corn, wheat and soybeans. He calls the year-round crop plan “the next big project” on the Knox family farm.

Like every member of the family, Knox said he had duties on the farm as soon as he was able to lend a hand.

“We milked cows before we went to school in the mornings, and then we came home and milked cows in the afternoon too,” he said. “It was just the way you lived. Looking back, it taught us how to work.”

As a young teenager, he learned an important lesson about working with cows.

“We had an old cow that kicked and a rope that we always had to tie to her,” Knox said. “I came in, knew better, but wasn’t thinking at all and forgot to put the rope on the cow. I washed her, had her ready, had her prepped to milk, and when I squatted down under that cow, it kicked me in the chest and threw me across the room.”

Despite the kick in the gut, he enjoyed working with cows and initially intended to attend N.C. State to pursue veterinary school, but Knox joked that he and chemistry didn’t get along. He ended up studying agronomy. When he graduated, Knox became an extension agent in Lincoln County. He also worked 27 years as a regional agronomist with the N.C. Department of Agriculture, retiring in 2012.

He was first elected to the local soil and water conservation district board in 1992. He’s been on the board since, holding a number of positions and served as chairman for the previous three.

Perhaps expectedly, significant changes have occurred in the years since the farm was first settled by the Knox family in the 1740s. At the time, a Scotttish man, John Knox, and his Irish wife, Jean Gracy, bought 600 acres of fertile Third Creek land for 37 pounds and 10 shillings. The family emigrated for Ireland, built a log cabin and raised seven sons and one daughter. Three of the sons fought the British in the Revolutionary War.

“With no-till, you’re not loosening the soil up continuously, so it has better chance of staying in place,” he said. “You’re not working the ground up as much, so there’s less erosion and there’s organic matter left in the ground.”

As for the future of agriculture, Knox said it’s important to get more young people interested in farming.

“It can be hard for folks to get into farming, but with some of the programs we have, it’s starting,” he said. “And there are a few more younger guys that are getting involved.”

Sit-ins, marches: ‘It doesn’t seem that long ago’