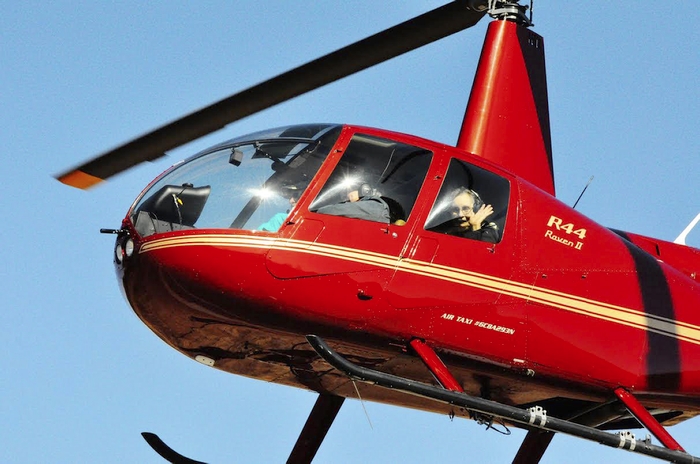 Donna Yale waves to Oak Park residents as she flies over Oak Park retirement community in Salisbury, NC. A helicopter ride was on her bucket list. Photo by Brittany Holt

On the windy and cold Thursday afternoon of Feb. 6th, 17 Oak Park residents took turns flying by helicopter across downtown Salisbury and on to Spencer before heading back to their retirement community.

The helicopter rides were part of “Traveling through the Decades Fitness Challenge.” Residents were offered the chance to participate after Activities Director Karen Leonard arranged the logistics with Charlotte Helicopters. Reini Grauer piloted the aircraft for a total of six rides, each lasting just about 10 minutes. With loading and unloading, the total time for the event was over two hours. Half of those flying are in their mid-80s or older.

With the first practical helicopters being produced and flown in the late 1930s, the rides were scheduled to continue the theme of enjoyable recollection of that decade. Oak Park residents will celebrate each decade through the 1980s with special events such as disco dancing and an Elvis night.

Each flight was slightly bumpy due to the buffeting winds. Donna Yale said, “I loved the ride. It was a little rough, but it was great. None of us were uncomfortable. We flew right over downtown and out to the train shops in Spencer. This was a once-in-a-lifetime event for me. Things look so different from the air.”

Grauer is a US Air pilot who has flown helicopters for about 30 years and now owns Charlotte Helicopters. He said, “We use helicopters for all kinds of jobs, most of them as a tool. You can see a golf ball lying on a green from the air. We flew the residents at about 400 feet in altitude today at speeds of up to 130 mph. Winds gusted to about 25 mph at times, bouncing us a little bit.” Mapping and photography are common uses for smaller models, while larger two-rotor helicopters can provide heavy lifting.

Resident Anne Hollifield climbed aboard with some concern for the blowing wind. After the ride, she said, “It was not scary at all. We had a good view, and the ride was very smooth, just as we were gliding along. This ride was one of those firsts for me!”

Oak Park was the major sponsor for the helicopter event. Other sponsors included Salisbury Moving and Storage, Legacy Health Care, Harwood Signs and TenderHearted Home Care. TenderHearted staff member Peter Gray was on hand to watch the rides even though the wind and 40-degree temperature made watching chillier than he expected. Gray said, “We work inside Oak Park Retirement and have been here for two years. I love it here. The residents look out for each other and when they see a need, they call us. We can approach that need in a compassionate way. With our help, many of the residents don’t have to move to a skilled facility.” TenderHearted Home Care, owned by Renee Gray and now in its fourth year of business, maintains an onsite presence at Oak Park from 7 a.m. to 9 p.m.

After his serious vehicle accident, Diane Rivers moved her husband, Ray, to Oak Park Retirement where he could receive extensive therapy. Diane Rivers said, “I enjoyed the ride. We spent most of the time looking for one house but couldn’t quite find it.” When asked about Oak Park, Rivers added, “Everyone is very friendly here. There are so many activities plus Ray needs the specialized help that he can get here.”

Known as an adventurer, Irene Moeller had anticipated the helicopter ride since she heard about the coming opportunity last year. In October 2014, Irene went skydiving in yet another Oak Park activity after earlier experiencing a zip line and whitewater rafting. She said, “It has been 40 years since my last helicopter ride. The last time was in New York.” Irene was on the last flight of the day and quickly got into the spirit of the event. She asked Grauer if he had enough gas for one more flight. He replied, “Yes, I have enough to take us to Myrtle Beach.” On their ride over Main Street in Salisbury, Irene talked with resident Rita Espel and Grauer over headphones until the ride came to an end with a smooth landing.

Grauer said, “It was a pleasure to take the Oak Park residents up for their helicopter experience. Many of them had to wait most of their lives to check this item off their bucket lists. It is great to see them ‘live for today.’ ”

Irene Moeller has yet another activity in mind. She said, “I am looking forward to the hot-air balloon ride that we are going to do next. I will be 82 in two weeks. After the balloon ride, I might slow down for a while.” But then again, I wouldn’t count on it. Karen might just help her find another bucket list item that she wants to do.