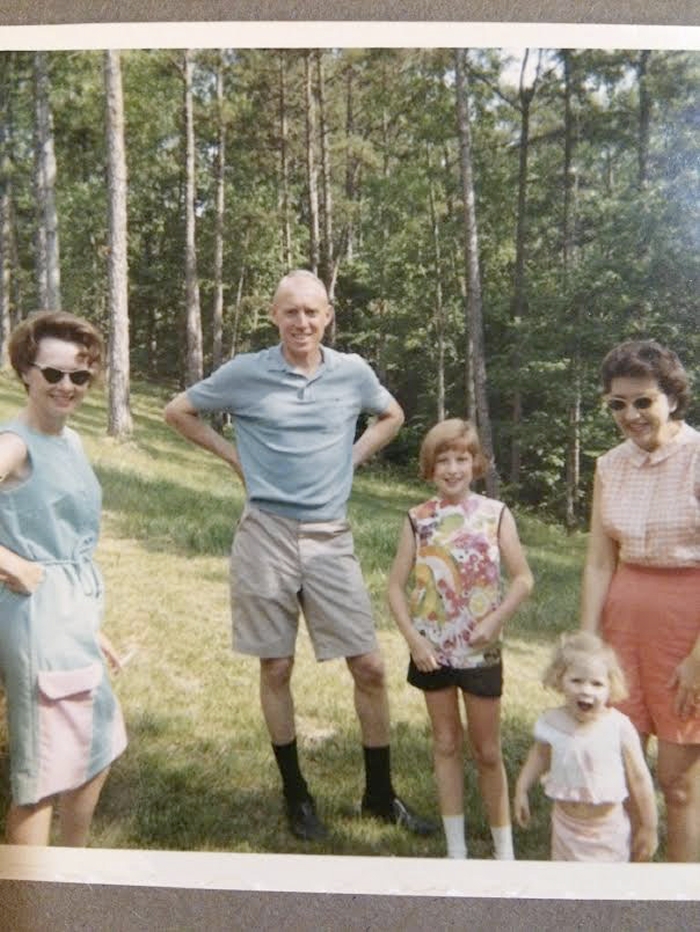 In this photo from her childhood, writer Myra Tannehill is at bottom right. Also pictured, left to right, are Fran Tannehill, J.P. helms, Libby Helms Hoffmire and Sally Helms.

Let me tell you about my friend J.P. Helms. I have known him my whole life. He made a playhouse for me for my sixth birthday. It had a half door, window boxed for flowers and a gravity-fed sink. I spent hours in that playhouse, cleaning and mopping, pretending to be a little housewife and mother.

I went on a driving trip out west with the Helmses and my parents. We saw the Grand Canyon. We visited my Uncle David in Flagstaff and had dinner with him. During the course of conversation, they realized they were both at the Battle of the Bulge. The immediate camaraderie, dare I say affection, between them was palpable. Uncle David related how he had scrambled in to repair vehicles. They almost giggled. I was fascinated. Here was J.P. Helms, a man I had known my whole life and seen weekly, if not daily, as a busy man who never sat still, who was interested in everything and everybody, a church-going man, a husband, a daddy. I had never thought of him in a war zone. And here was my Uncle David, one of my favorite uncles, whom I saw, due to the distance we lived apart, once every five years or so. And they kind of giggled. I’m sure J.P. could have revealed during the course of this conversation that he was wounded at the Battle of the Bulge and received a purple heart, but he did not.

He told me a story about during World War II when he was accompanying a soldier who had broken military law to the brig. They were handcuffed together. During one of the stops, J.P. felt the awkwardness of his prisoner, took the handcuffs off and said to the man, “I trust you not to run away.” In a crowd, the man and J.P. were separated. J.P. went back to the train at boarding time, and there was his prisoner, waiting for him.

When I was in high school, he took me to the Post and introduced me around to everyone. Showed me the ad room and how ads were made, and I saw the room where the paper was printed.

When I came home from college with a pet rabbit, Ginger, illegal in our dorm room that my roommate acquired and I was suckered into bringing home, J.P. helped me build a hutch for her. It was more like a rabbit condominium with cubbies and multiple levels and a sliding tray to gather the rabbit pellets.

J.P. was the kind of man who stood up when you entered the room. And when you entered or left his home, he stood and shook your hand. Even when he had an automatic chair that lifted him out of it, a walker, slippers, a cane, whatever. He got up to shake your hand.

Not too many years ago, Jimmy Wilson was over putting some bricks into the drain in my backyard and J.P. came over to watch and help. J.P. picked up a big swipe of mortar that dripped down the bricks and tossed it back into the mix. I said, “Don’t you worry about the lime on your fingers?” Nah he said. Of course he didn’t worry about such a thing. But after I left them to their work, J.P. later told me that Jimmy Wilson said I was a “smart girl.” That’s high praise. He also saw me carrying straw bales and huge dog food bags and declared me a “strong girl.” I was proud about that.

When I lived in Boone, J.P. brought loads of wood to my house in the winter for the woodstove. He laid the tile under said woodstove. He brought a load of red clay when I was building an earthen home. He helped put the wood flooring in. He hung the porch swing on my house. He helped build the front porch. When my husband and I bought and renovated a home in Woodleaf, he was so interested and wanted to help. He was in his 90s. He handed tools up the ladder. He loaned and gave us tools, a planer, a box fan, an extension ladder.

He had a Victory garden every year. Even though he and Sally ate out nearly every evening after his retirement, he could not, not plant the garden. He planted loads of green beans and Sally canned them every year. I’d like to know how many jars of green beans are on the shelf in their cellar. Though he didn’t eat them, he planted turnips for my grandmother who loved them. He planted several rows of greens and then invited the recycling workers or a friend from Jersey City to come pick as much as they wanted. He had a community garden before there was such a trendy concept. In one of his last gardens, I saw two women over there picking and when they left, they had hefty bags full of greens.

I wish I knew how many Habitat homes he worked on. Coleman Emerson, do you know? His tools had his initials on them, J.P.H, because when he went on a job, everybody’s tools got all mixed up and this way you could retrieve your own when it was time to go home. When hurricanes hit, he was one of the first men to sign up to travel to the area, take his tools, and see if he could help. He had a shop so neat you could find anything you wanted in there. His hammers were sorted by weight, the clamps by size, the nails and screws in labeled, glass jars. He could do just about anything in that shop and did. It was a sad day when someone broke into it, stole and sold his tools off one by one for God knows what awful habit. That was about the most unjust action I have ever witnessed. Here was a man who fought for our country, worked hard to serve and feed the people, used his talents and tools for good. If the robber had knocked on J.P.’s door and said, “Can I use your shop to make something to sell?” J.P. would have said yes.

I have never known him to say no to someone who asked for help. Anyone who came to his door and asked for $5 got it. It was almost a joke in our neighborhood. He was still delivering Meals on Wheels in his 90s.

As I young girl, I saw him get hurt a couple of times cutting down a tree or building something. Enough for stitches. He’d get hurt and keep right on working. He didn’t complain or grumble or fall down and say, “I’m hurt!” Someone would say, “You’re bleeding!” and he would acknowledge that in a quiet way and sometime later we’d be at the hospital waiting for stitches. Or not.

Once I saw him pitching hay with a pitchfork. He was joyful in it. “I haven’t done this since I was a kid on my dad’s farm,” he said. It was fun to think of him as a kid.

When he was older and white haired, I asked him what color his hair used to me. He laughed. Just like it is now. He’d always had white hair and some people used to call him whitey.

I knew I wanted to marry someone like J.P. Helms. I wanted someone industrious, cheerful, masculine, kind, resourceful, and generous. And I did when I married Dean Hamilton. When Dean and I picked up our infant son for adoption, we drove home with him thinking about names. “Who are your heroes?” I asked my husband and he named a few. I said, “J.P. is my hero.” Our son is named J.P. And we already have some tools with his initials on them.