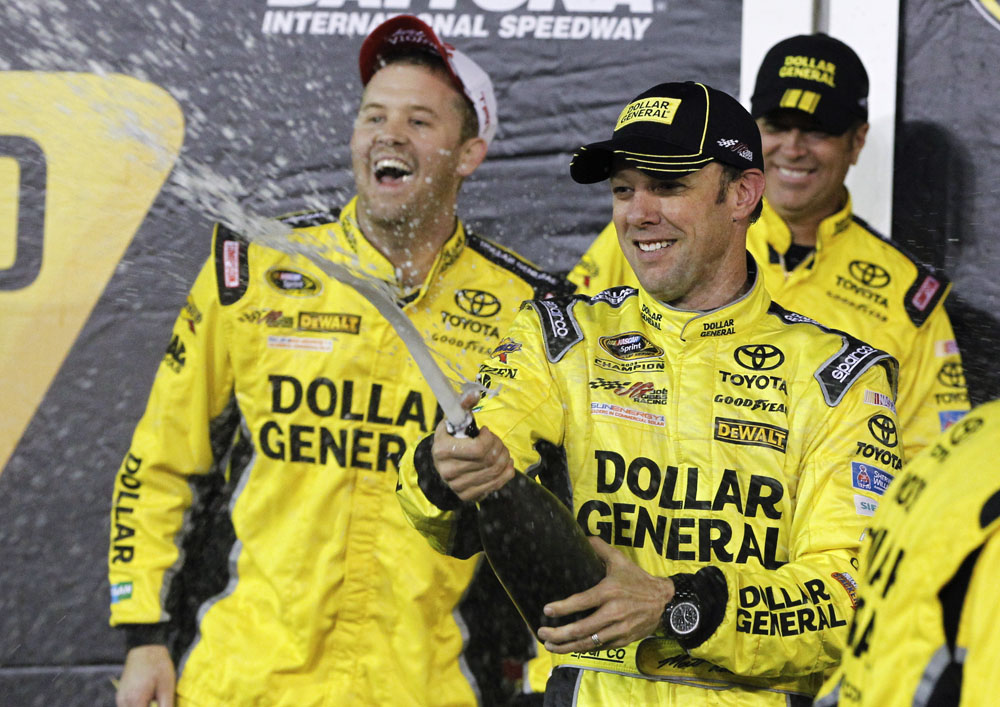 DAYTONA BEACH, Fla. (AP) — Matt Kenseth, coming off a winless 2014 season, has opened the new year with a victory.

Kenseth won Saturday night’s exhibition Sprint Unlimited, which was a crash-filled kickoff to the NASCAR season for the second consecutive year.

Kenseth, in his third season with Joe Gibbs Racing, had one of the strongest cars in the field and he pulled away on a restart with four laps remaining to claim the win.

Now he’s hoping it’s a sign that his Toyota will be a contender in the Feb. 22 season-opening Daytona 500.

“It’s going to be a good week,” Kenseth said. “We’ve got a lot of racing left to do. But all our cars have speed, which is the first thing you’re going to look for.”

“What a hot rod we had. After the last year and a half I’ve had, I really needed that,” Truex said. “These guys really needed a shot in the arm. I’m just really proud of their efforts over the wintertime. I’m really excited about this week.”

Carl Edwards, in his debut race for Joe Gibbs Racing, was third as JGR Toyotas went first and third in the race. It marked the second year JGR has won the Speedweeks opener; Denny Hamlin went to victory lane last season.

Casey Mears was fourth and followed by Kyle Larson, Logano, and Jeff Gordon, who raced in his final Speedweeks opener. Gordon is retiring from full-time racing at the end of this season and has said this year will be his final Daytona 500.

Harvick was upset with Logano for how he pushed Harvick’s car in the final laps, and the two showed their displeasure with each other by banging cars on the cool-down lap. They then spoke on pit road, where Harvick held the conversation while wearing his helmet.

“It’s Kevin being Kevin. New year, same stuff,” Logano said. “I was just trying to help, really. We had a run and we kept pushing. He doesn’t understand I was trying to help.”

Danica Patrick also seemed to be upset with Logano as she walked by him after the race.

The second red-flag occurred after a three-car accident that sent Greg Biffle hard into an inside wall. The hit caused his car to ricochet into Kurt Busch’s, as both cars were mangled. Also involved was Tony Stewart.

He charged from 22nd to eighth in the first two laps of the race, and confidently told his team how he was feeling: “You think they know I showed up to play today?” he radioed.

On the restart with four laps remaining Kenseth was able to pull away as Truex couldn’t get any assistance from Edwards, who elected to help Kenseth get the win.