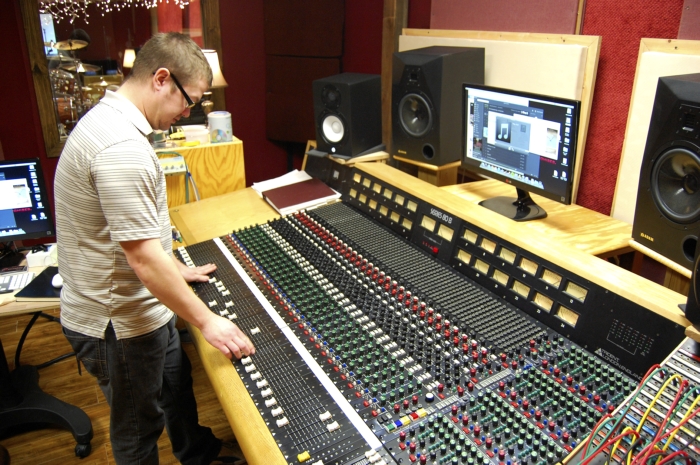 Music producer Daniel Gardner works the audio mixer at Silver Star Recording music studio. The studio recently opened and is located on South Main Street near the county's airport. Gardner has been involved with music for 20 years.

Musicians looking for the perfect sound have a new place to create their music in Rowan County.

The studio is located in the same building that used to house a produce store, Farm Fresh Marketplace. Gardner and Jenkins, with a little help, renovated the building to accommodate a studio. It now has a “live room” where bands and musicians perform, a vocal booth and a control room.

The studio has been open about a month and did its first album with a band called Ultimate Rock Machine. The band recorded 12 songs at the studio.

Gardner, 33, has been involved with music for 2o years. He used to be in a band called Mike Willis and the Escape Artists. After the band became defunct, he got into music production and worked at a studio in Atlanta, Georgia, for about five years — making music with artists such as the rapper MASE and singer, song-writer Brandi Carlile.

“I ended up falling in love with the production and this side of it,” he said.

Gardner said he likes working in the studio because there are creative and technical elements involved.

“It works on both sides of my brain, ” he said.

Gardner grew up on rock and ’90s music, but said that in his time as a producer he has worked on everything from folk music to Christian rock to heavy metal.

Jenkins, who plays the drums, said he enjoys country and Christian music.

“Once music gets in your blood it’s hard to get it out,” he said.

Gardner moved to Rowan County a couple of years ago to work for his uncle, who owns Carolina Avionics — based at the county’s airport.

Gardner said he started to miss working in a studio and was thinking about doing something small, like getting a laptop with some music software. But his uncle had other ideas.

They leased the location on South Main because it’s close to the airport and on a thruway. And “the price was right,” Jenkins said.

After three months of “non-stop” work, they had a music studio.

There used to be vegetables in here, Jenkins said as he stood in the studio’s control room.

For the studio’s name, Gardner picked “Silver Star” from a list his uncle made. Jenkins said they have around $100,000 worth of equipment in the studio. There’s a new drum set, guitars and amps they got from Guitars USA in Salisbury, plenty of microphones and an electric piano.

In the control room is the sound mixer, a huge control panel with hundreds of knobs, buttons and sliders.

The mixer is around 30 years old, Jenkins said. It’s a Trident Series 80B and was top the of the line when it was first introduced.

Today most people use digital mixers in a home studio, Gardner said. But he and his uncle wanted something that would fit perfectly in a professional studio.

“We wanted to get a true sound,” Gardner said about having the mixer, which they got from a music studio that had closed.

There’s also a desk with a computer, monitors and speakers in the control room. The “live room” in Silver Star Recording. The control room is on the other side of the window, right.

Gardner said music production is like making a movie, several parts are involved.

He said the producer in the studio is like the director on a film set, the musicians are like the actors and the sound engineers are like the camera and lighting crews.

Like a director instructing actors how to perform a specific scene, Gardner said he’ll suggest to musicians that they try playing a song in different ways.

The band doesn’t just show up and he hits “Record,” Gardner said. He has to make sure the sound quality is perfect before recording anything. After the recording is finished he’ll go in and, depending on what the artist wants, add effects to the music.

Musicians can get hourly or block rates at the studio. Whether someone just wants to hear what they sound like singing and playing the guitar or a band wants to make an album, Gardner said he can pretty much work with anyone.

Jenkins said they’d like to work with church choirs and gospel groups too.

Gardner and Jenkins said right now they’re trying to get the word about their studio. The website, www.silverstarrecording.com is up and the businesses cards are printed.

On the website, people can listen to songs Gardner has produced.

They’re hoping to spread news about the business by word of mouth — bands and artists telling other musicians about their experience at Silver Star, Gardner said.

“I think once people hear the quality of what they can get here” it’ll work out, he said. The microphone in the vocal booth at Silver Star Recording music studio is illuminated by light from a lamp. The studio’s control room is on the other side of the window.