Locals travel to Raleigh for Moral March on State Capitol 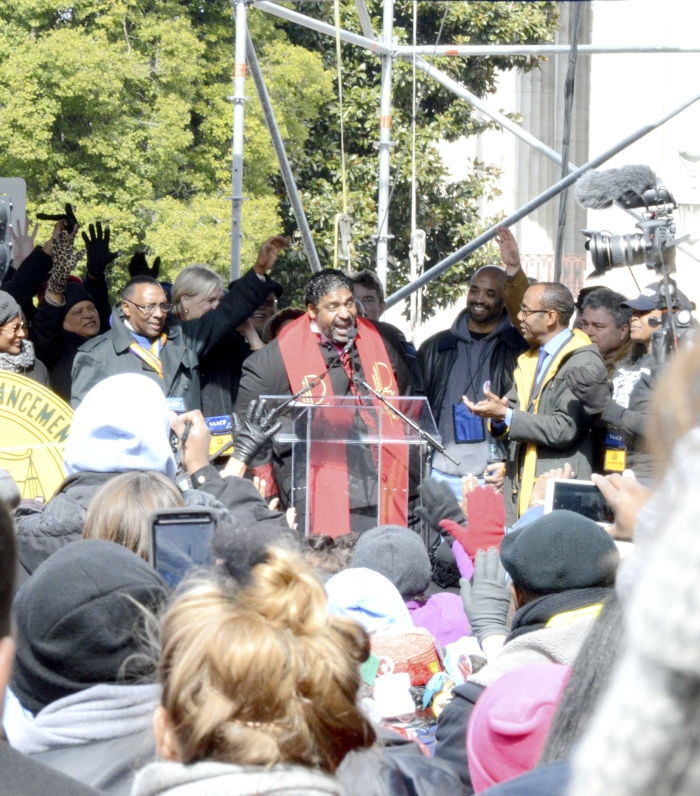 Josh Bergeron / Salisbury Post - The Rev. William Barber, a pretestant minister and national board member of the NAACP, fires up the crowd during a speech Saturday during the annual Moral March in downtown Raleigh.

RALEIGH — A throng of thousands snaked through the streets of North Carolina’s capital city Saturday as part of a Moral Monday Movement rally that addressed injustices from voter suppression to labor rights.

With the sun just above the eastern horizon, a throng of people gathered in front of the Raleigh Memorial Auditorium for the ninth-annual HKonJ — Historic Thousands on Jones Street — or Moral March. A few dozen in the crowd were Rowan residents and Livingstone College Students. The local group required a bit of help from the Cabarrus County NAACP, as more Livingstone students showed up than expected.

The march occurred on the birthday of abolitionist Frederick Douglass and three weeks before the 50th anniversary of Bloody Sunday, where a group of marchers and civil rights activists were beaten while trying to walk from Selma, Ala. to the state capital — Montgomery, Ala.

The crowd of people on Saturday listened to speeches from various activists, school teachers and minimum-wage workers before departing toward the state capitol building.  The words of speakers echoed through the concrete conglomerate of downtown buildings.

“No matter what [elected officials] do to strip up us of our rights, we ain’t going no where,” said N.C. NAACP Executive Director Michelle Laws.

Todd Warren, a Spanish teacher in Greensboro, was one of the dozen or so speakers before the march began. Warren spoke about raising wages, living conditions and problems with the public education system. He prompted the audience with a series of questions about the state of society.

“Are you ready for an end to bullying of the LGBT youth in our schools,” he asked. Are you ready to close these coal-fired power plants that are giving our children asthma? Are you ready to raise up, stand up and say $15 [per hour] in a union. Then, look at each other and say ‘this is ours.’ We got this.”

As the parade of thousands progressed through the streets of Raleigh, Salisbury-Rowan NAACP President Scott Teamer said the issues talked about Saturday related to many of the issues Rowan County leaders are grasping to fix. Among other things he mentioned Rowan County’s poverty rate, which is nearly 19 percent, according to the latest U.S. Census estimates.

Like other speakers during Saturday’s march, Teamer said state legislators, a majority of which are Republican, aren’t doing their jobs.

“I think a majority of people just don’t know what our legislators are really doing,” Teamer said. “They can expect to hear from us. I think the march is important because mass mobilization is the only way to get something done.”

Similarly, the students and staff who traveled from Livingstone said the trip was neccesary because many of the issues would affect future generations.

“There are lots of things talked about today that I think are important and they are going to affect us in the future,” said Deanca Crouch, a junior at Livingstone College.

The group of Livingstone students filed into the massive crowd as another round of speakers — some representating state and national organizations — talked about injustices in society. A common phrase throughout the march was: “One step forward, not one step back.”

Speakers would say the first portion of the phrase and the audience would echo “not one step back.”

The last was Rev. William Barber — a protestant minister, political activist and member of the NAACP’s national board. He said North Carolina doesn’t have a Republican, conservative, Democratic, or liberal problem, but rather a heart problem.

“When politicians deny people the right to healthcare, when we acknowledge that life and the pursuit of happiness is essential to the American promise we have a heart problem,” Barber said. “When there are people in North Carolina dying who could be treated and when there are people who have died who could have been saved, we don’t have Republican problem, we don’t have a Democratic problem, but we have a heart problem.”

The crowd erupted with cheers as Barber continued.

“North Carolina is our Selma. When the worst voter suppression laws were passed right here in North Carolina, worse than Jim Crow, when we see an all-out attempt to abridge and deny the right to vote and when there is more commitment to protect and expand the ability to own a gun, even on a college campus, than to protect and expend the right to vote, we have a heart problem,” Barber said emphatically.

Barber spoke for more than 30 minutes, and, as he walked away, the crowd cheered with an increased intensity and hands raised. The noise from the cheers and speakers rebounded off buildings and could be heard for blocks.

“We are the moral movement, and our job is to shock this state,” Barber said.