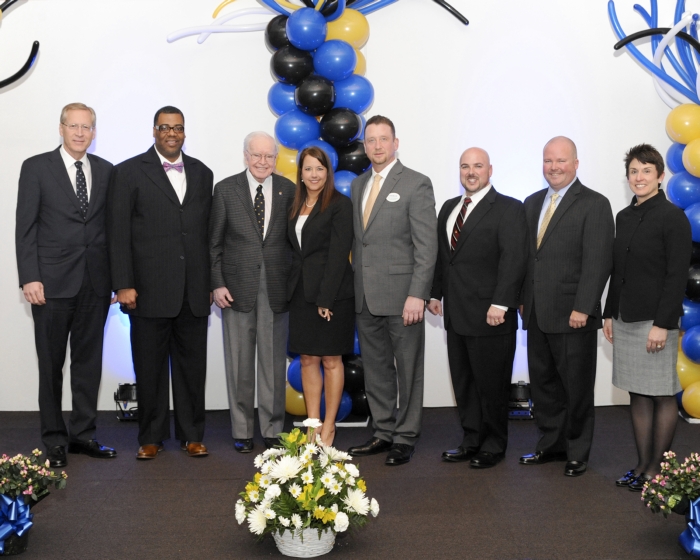 Food Lion has named Rhonda Mauldin its 2014 Store Manager of the Year.  Mauldin, who is the store manager of the Food Lion located at 1004 W. Georgia Road in Simpsonville, S.C., was selected from a group of more than 1,100 store managers across the company.

“I really don’t think of myself as an exceptional store manager; however, what I do think of as exceptional is my team,” Mauldin said after receiving the award Wednesday. “They really are the reason I’m here today and I’m honored to accept this award on their behalf.”

Mauldin was honored at an annual event yesterday at Food Lion’s headquarters in Salisbury. Her family her family and colleagues were in attendance. This is not the first time Food Lion or the grocery store industry has lauded Mauldin for her outstanding leadership skills.  She received store manager excellence awards for her work both with Bloom and Food Lion stores in 2009, 2010, 2013 and 2014. In addition, Mauldin received Progressive Grocer’s Top Women in Grocery award for the Store Manager category in 2014.

“Our store managers are the face of Food Lion to our customers,” said Meg Ham, president of Food Lion.  “Rhonda personifies this every day by running a great store, teaching and training associates, mentoring future leaders and caring for our customers and her community through outstanding service.  Her store is always one of the top stores in donating meals and time for her local food bank.  She is an exceptional leader, has developed an outstanding team, and is so deserving of this honor. We’re proud to have her as part of the Food Lion team.”

Mauldin has worked in the grocery store industry for nearly 30 years. She joined Food Lion in February 2006 as a dry assistant manager in Anderson, S.C.  Six months later, she was promoted to store manager and moved to Seneca, S.C., to serve as the store manager at this location. Because of her sharp skills of transforming businesses into high-performing stores, she was later transferred to the Simpsonville, S.C., store location in 2007.

To honor Mauldin and her exemplary community service, the company will donate $2,000 in Mauldin’s name to her store’s local feeding agency, Harvest Hope Food Bank, in Greenville, S.C.  Mauldin and her team support this food bank with food donations and volunteerism throughout the year.

In addition to Mauldin being selected as Food Lion’s Store Manager of the Year, three store managers were recognized for exceptional leadership. The 2014 Division Store Manager Excellence Award recipients include:

Food Lion will donate $1,000 to each of the feeding agencies served by these stores in honor of the division winners.  Food Lion’s Store Manager Excellence Awards recognize and honor exceptional store managers who enrich the lives of Food Lion’s customers, associates and the communities we serve, successfully lead our business, and support and inspire others.