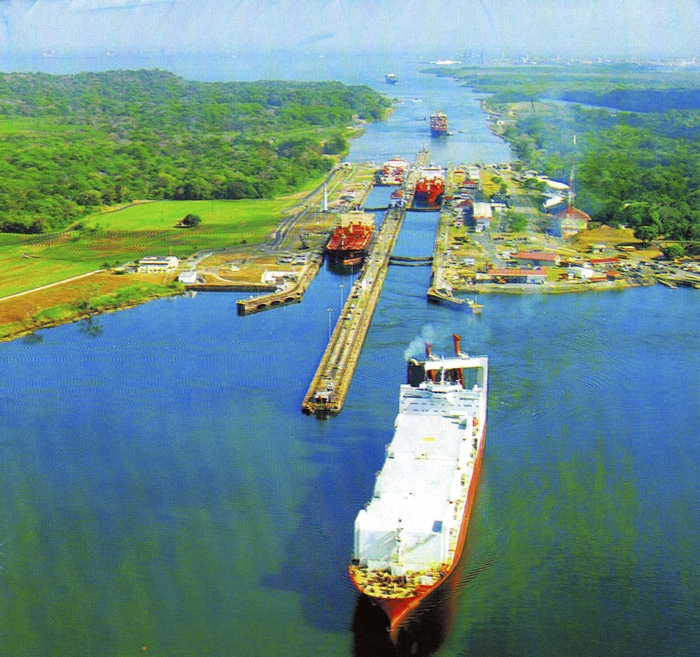 Can you imagine sailing a ship in the early 1900s from New York City to San Francisco? Back then, it would have taken about 60 days — up to 14,000 miles — and included a dangerous trip around Cape Horn, the southern tip of South America. Fast forward to Aug. 15, 1914, the official opening of the Panama Canal and the opportunity to cut that travel time in half. The Panama Canal is a 48-mile ship canal that connects the Atlantic and Pacific oceans. The canal cuts across the Isthmus of Panama and has dramatically increased international maritime trade. Hailed as an architectural marvel and one of the most complex engineering projects ever undertaken, the Panama Canal is sometimes referred to as the 8th Wonder of the World.

I was fortunate to see the canal first hand on a cruise to Colon, Panama. At first glance, the canal looks a bit underwhelming, but after viewing several ships going through its locks from an elevated observation deck, it was an impressive sight to behold. To say the trip through the canal is tedious and time consuming is an understatement. On average, it takes a ship eight to 10 hours to pass through.

Between 13,000 and 14,000 ships use the canal every year. American ships use the canal the most, followed by those from China, Chile, Japan, Colombia and South Korea. Every vessel that transits the canal must pay a toll based on its size and cargo volume. Tolls for the largest ships can run about $450,000. The smallest toll ever paid was 36 cents in 1928 by American adventurer Richard Halliburton, who swam the canal. Today, some $1.8 billion in tolls are collected annually.

Having built the Suez Canal in 1869, the French were upbeat about being able to connect the Pacific and Atlantic. They, however, not only underestimated the task, but also had not taken into account the region’s harsh jungle terrain, torrential rains and unbearable humidity. Deadly diseases, particularly yellow fever and malaria, consumed not only laborers but the company’s top directors. After seven years of battling the atrocities unleashed by nature and the death of almost 22,000 workers, the French abandoned the project.

The U.S. had to pay $40 million for a transfer of rights and property from the bankrupt French company. The U.S. inherited huge excavations, equipment and a railroad. The French had also built houses, hospitals and churches.

President Theodore Roosevelt played an instrumental role in helping Panama achieve independence from Colombia and, in return, the U.S. was granted control of the Panama Canal Zone. The U.S. invested 10 years and almost $400 million in the project.

More than 80,000 workers helped to construct the Panama Canal, and nearly 30,000 lost their lives to disease, heat and other perils of the Central American jungle.

At noon on Dec. 31, 1999, Panama assumed full responsibility for the administration, operation and maintenance of the canal.

Unlike the Suez Canal, a sea-level canal with no locks, the Panama Canal requires locks based on elevated terrain. There are locks at each end (one at Atlantic end and two at the Pacific end) to lift ships up to Gatun Lake, an artificial lake created to reduce the amount of excavation work required for the canal, 85 feet above sea level. The current locks are 110 feet wide.

Though vessels use their own propulsion for the greater part of their Panama Canal transit, when passing through the locks they are assisted by electric locomotives. Working in pairs, locomotives keep the vessels in position within the locks chambers. Depending on its size, a vessel can require assistance from four to eight locomotives.

Gatun Lake, which was the largest man-made lake in the world at the time, makes up 20 of the 48 miles of the canal route. The impassable rainforest around the lake has been the best defense of the Panama Canal. Today these areas remain practically unscathed by human interference and are one of the few accessible areas on earth where various native Central American animal and plant species can be observed undisturbed in their natural habitat.

To get a closer look at the rainforest, my family and I took a tour recommended by the cruise line. We began the tour in a small boat that brought us out onto the Canal Zone on Gatun Lake. It was quite intimidating sitting in our small tour boat looking like a fishing bobber while massive container ships passed us by traveling through the canal. We explored various inlets and islands from the boat to spot white-faced Capuccian monkeys, Howler monkeys, Sloths, huge iguanas, baby crocodiles and a large assortment of birds.

In addition to visiting the rainforest, we visited a tribal village where we interacted with the Embera Indians. The Embera were actually native to the Colombian border region and later moved north to gain access to Panama City. A self-sustaining society, the Embera hunt and gather most of their food and build their own homes, but send their children to nearby schools. The Embera embrace travelers and share their communities with tourists, providing fresh insights into different modes of living and a level of connection with the environment that many other cultures don’t come close to achieving.

The beating of woven drums and the percussive clink of turtle shell instruments sounded on our arrival to the village. The tribe sat us down to perform several traditional dances, calling us to join in at the end. A woman took my hand and I got thrown right into it. I was just glad I didn’t step on anyone’s feet.

We ventured into a handmade canopy created from trees, bark and fronds (leafs of a palm). The Embera cut these materials after a full moon, believing this will keep termites and other insects away. After touring the canopy, we entered an authentic Embera kitchen consisting of three large pieces of wood arranged around a small open flame. We sat around the fire to eat our lunch of roasted plantains and tilapia caught from the Chagres River that morning, all wrapped in a folded banana leaf.

I marveled at their amazing creativity and skilled craftwork on our departure from the village, from the intricate palm weaving to the figurines sculpted from aged Tawa nuts. This experience was right out of the pages of National Geographic, with an unforgettable encounter with a living Indian culture in Panama’s rainforest.

It was neat to see that skyscrapers, cars, processed food, traffic lights, Facebook, etc. means nothing here. They sent us off with a warm goodbye and the comforting wisdom that the roots of luxury lay close to the simplest things in life.

Today, more than 100 years after its completion, the Panama Canal continues to be a symbol of man’s greatest triumph over nature — separating two continents to unite two oceans.