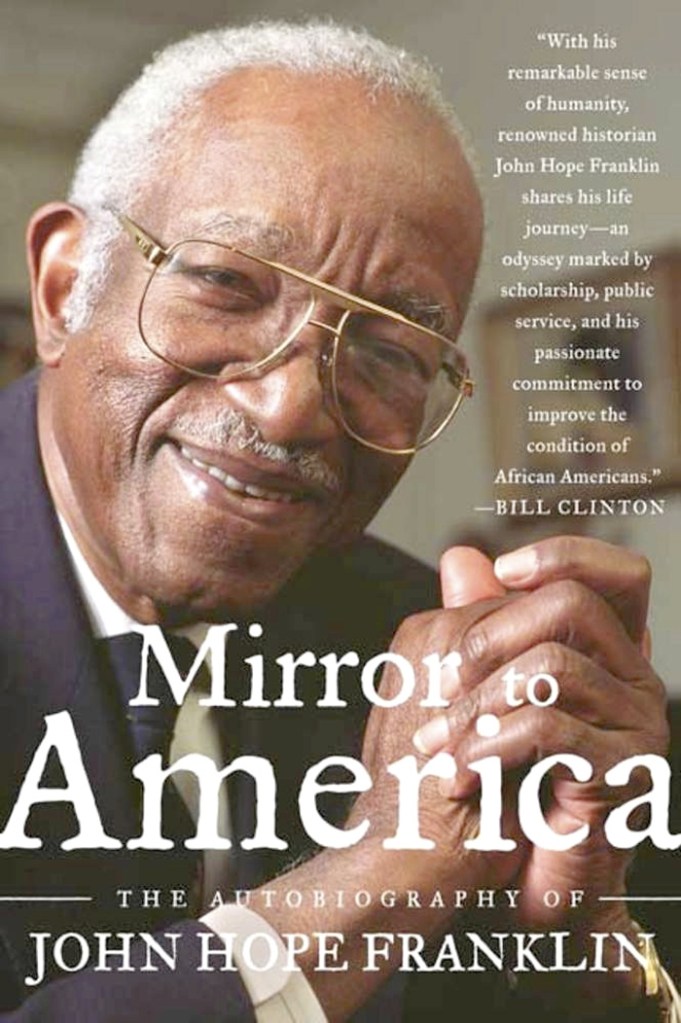 Among books to consider for Black History Month, the autobiography of John Hope Frnaklin, who faced racism and triumphed to become an important historian.

What are you doing to commemorate Black History Month?

You might read a book, one that you might not otherwise consider. I have a few suggestions. These might not have a heavy black history label. But each offers an enriched understanding of our past as a part of a history that we share, not one that sets races and people apart.

In “The Edible South: The Power of Food and the Making of an American Region,” Marcie Cohen Ferris chronicles some of the happy features of our food history and culture.

She shows how the African food traditions of enslaved people mingled in the slave owners’ kitchens with European cooking styles to bring about some of the Southern dishes that we share today. But, she reminds us, the story of food “is not a ‘moonlight and magnolias’ banquet of tempting culinary delights, but rather, a narrative about contested forces that have shaped Southern foodways for over five centuries. This is not a pretty or an easy story.”

The recent success of African American author Jason Mott is being celebrated by everybody in his native Columbus County. This is the same county where, as some remember, the Tabor City and Whiteville newspapers shared a Pulitzer Prize for Public Service in 1954 for their efforts fighting the powerful Ku Klux Klan.

Mott’s first novel, “The Returned,” became the basis of an ABC television series, “Resurrection,” which completed its second 13-week series on Jan. 25.

While both “The Returned” and his second book, “The Wonder of All Things,” deal with human prejudices and exploitation, these themes are not race-based. His characters have different racial backgrounds, but other things divide them and bring them together.

Mott’s cheerful accessibility and modesty have already helped make him a popular North Carolina figure in the world of books. His post-racial literary point of view could make him a significant figure in future versions of black history.

Others, like this former player, assert that Driesell’s greatest achievement was building a national powerhouse team at Davidson College during the 1960s. A former Carolina basketball star told me his achievement at Davidson puts him in the top ranks of college coaches.

In his new biography, “Charles ‘Lefty’ Driesell: A Basketball Legend,” Martin Harmon shows that beginning in the 1960s Driesell, first at Davidson and then at Maryland, led the way in recruiting black athletes to play on previously segregated Southern college teams. The magnificent contributions of black athletes in pushing open the doors of opportunity in other areas will someday be recognized as an important part of black history.

Finally, during the year of what would have marked his 100th birthday, all North Carolinians should remember John Hope Franklin and his last book, an autobiography, “Mirror to America.” It was published 10 years ago, not long before his death at 94 on March 25, 2009.

No one, of whatever color, can read his story of struggle in the face of racism and his ultimate triumph and not come away with a better understanding of what he and every other African American had to endure in those times.

From the grave, Franklin enjoins us never to forget.

Especially not during Black History Month.

These books will be featured on UNC-TV’s North Carolina Bookwatch during February: Martin Harmon, “Charles ‘Lefty’ Driesell: A Basketball Legend,” (today and Thursday at 5 p.m.)