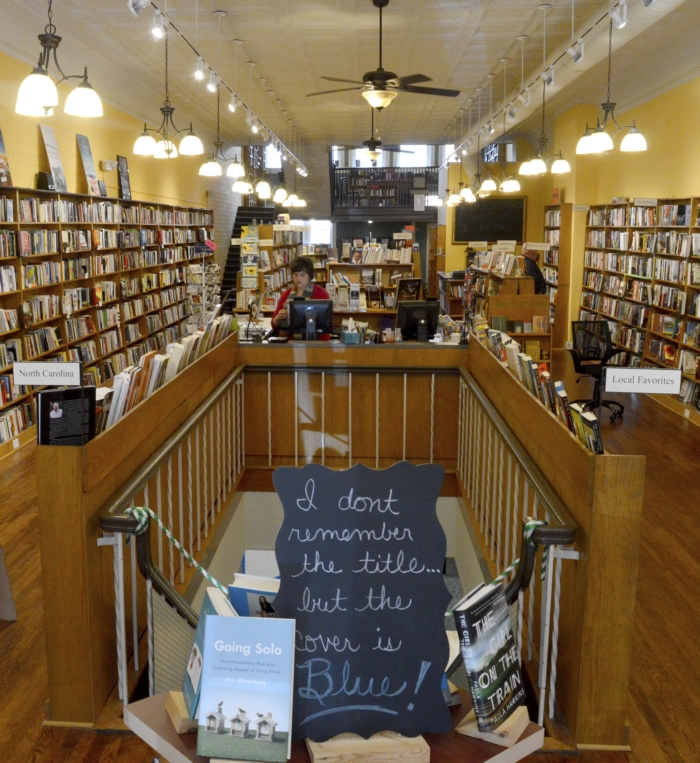 Josh Bergeron / Salisbury Post - Dozens of books line the shelves of the Literary Bookpost in Downtown Salisbury. The bookstore, when renovated, took advantage of both the federal and state historic tax credits.

As Cultural Resources Secretary Susan Kluttz tours the state to promote a restoration of North Carolina’s historic tax credits, the City of Salisbury is trying to rally support by offering resolutions to governing boards of Rowan County Municipalities.

City Councilwoman Karen Alexander, who organized a visit this week by Governor Pat McCrory and Kluttz, said sending the resolutions to county government and all Rowan municipalities was important to raise awareness about the need for the credits.

Rowan County Commissioners don’t have the draft resolution on Monday’s agenda and haven’t discussed it extensively, said Commission Chairman Greg Edds and Commissioner Judy Klusman. The pair differed on the right solution for historic tax credits, but both said a solution is needed. Klusman favored restored a credit similar to the state’s just-expired program, while Edds prefered an approach that also used municipal funding.

“When you have a blighted area like downtown used to be, and that’s past tense, it can be revived when people take advantage of the state tax credit to restore buildings,” Klusman said.

“I’ve been open to hearing both sides, and I think both sides have valid points to make,” he said. “My position, what I’ve decided personally at this point, would be a hybrid model, with it being one that would include income producing properties and one that would include some matching funds from the community. It would givee the community buy in since they will be benefitting from the property tax.”

During McCrory’s and Kluttz’s visit this week, both stressed in speeches the potential for job growth and historic preservation if credits were restored with a similar methodology. When the credits expired in 2014, federal credits, still presently in place, were 20 percent and state credits were also 20 percent. The rate Kluttz is proposing would be slightly lower in the overall percentage, starting at 15 percent for commercial projects, however, they would largely function the same.

When asked about benefits for Rowan and Salisbury, Alexander also touted the potential for growth in property values. Alexander and Kluttz both say many projects wouldn’t be possible without a state tax credit because of initial renovation costs.

McCrory and Kluttz this week toured the former Bernhadt Hardware Building and the Fulton-Mock-Blackmer House as example of properties that could use the credit, but Salisbury’s downtown is chock-full of potential and completed renovation projects that used the historic preservation tax credit. Ine neccesary requirement is being on the National Register of Historic Places. Using the credits, The Literary Bookpost’s current location was renovated several years ago.

“To be brutally honest, it wouldn’t have been economically feasible without the state and federal tax credits,” said Literary Bookpost Owner Bill Greene. “It’s definitely an economic driver.”

Greene’s bookstore was previously located across Main Street from its current location. The current spot is the former home of a shoe store, Greene said.

“If you don’t have winners, then you’re sort of dead in the water,” Greene said. “I just don’t see throwing the bathtub and the baby out.”

For his part, Greene said he received about $60,000 in state tax credits and used the extra money for bookstore-related expenses. With the renovation complete, Greene estimated he pays about $20,000 per year in sales tax and $4,000 per year in property tax.

“I have provided thousands of dollars in wages to lots of employees over the six years who have paid income taxes,” Greene said. “I think the state can justify the program. They have made money if my accounting is correct.”

Debate over the merits and faults of Kluttz’s proposal would ultimately be decided in the N.C. General Assembly where a bit of debate is brewing among the two legislative houses. Rowan’s state senators, for example, said tweaks would be needed to the currently proposed credit.

When asked about a restored historic tax credit, Sen. Andrew Brock, R-34, focused heavily on the effect a revived credit might have on personal and government finances. Brock said the current proposal amounted to a special exemption for people that could afford a renovation and said he favored cities providing money for renovations.

“Are the cities doing anything to belly up to the bar,” Brock asked. “Should they be helping restore downtown areas or out being another telephone and cable company. Is the city actually doing what its supposed to do?”

Sen. Tom McInnis, R-25, was in Salisbury this week for McCrory’s and Kluttz’s visit. McInnis said he’s still undecided on the best version of restored state tax credits. Cities municipal funding, however, wouldn’t be a good solution, he said.

“We have so many cities that are almost bankrupt don’t have any extra skin to put in that game,” he said.

McInnis referenced multiple counties and cities in his district, which is largely rural, as examples of areas that wouldn’t be able to fund historic preservation. So far, discussion on tax credits hasn’t come to the legislature, McInnis said, but he expects a proposal to come to Raleigh soon.