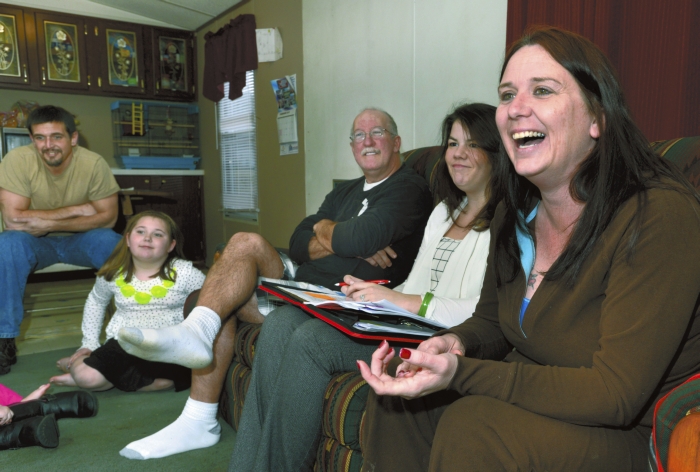 Loretta Stancil, on the right, helps care for her brother, Anthony Brown in the center, and his son Scott Rogers. Left to right in the photo is Craig Stancil, Hailey Stancil, Anthony Brown, Stephanie West ( a Bayada social worker), and Loretta Stancil. photo by Wayne Hinshaw, for the Salisbury Post

KANNAPOLIS — “Am I my brother’s keeper?”

Loretta Stancil answered this age-old question with a resounding “Yes!”

“Of course, I wanted to do everything I could to get them reunited,” Loretta says.

She and Anthony wrote a letter to the Department of Social Services in Cleveland County, where Scott was living.

His answer was a resounding, “Yes!”

“We set up a meeting, and they met, and they’ve been connected ever since,” Loretta says. Scott came to live with them two years later.

Until this point, Loretta says, “I was living a normal life with my husband and three kids. When I got that phone call, I struggled with the decision.”

She knew she could not turn away her family. It came with a price, however, contributing to the break-up of her marriage to Craig Stancil.

But things have changed.

Loretta also believes these words with all her heart.

“What was your dream?” she asks her brother.

“You’re sitting in it!” Anthony says, smiling. He smiles a lot, now.

“His dream was that he and his son could live together,” Loretta explains. On Monday, Anthony and Scott will officially move into a mobile home together, although they’ve already got a lot of their stuff here.

“I love them both very much,” Loretta says. “It brings me such great pleasure and love to see them together.”

“From where I was nine years ago,” Anthony says, “I think I’ve come a long way. From a bad environment to now is a huge step.”

Loretta is not far away. She and daughter Hailey, 9, have moved just across the street. Loretta and Craig’s son, Stone, 17, stays with the guys at night, just in case they need anything.

Craig and Loretta’s uncle lives on the other side of the street, just a few doors down.

“Yes, that is my uncle who lives with him,” Loretta says, grinning.

The family also includes Loretta and Craig’s granddaughter, Raylee Stancil, 2, whom Loretta keeps occasionally for her ex-daughter-in-law. The youngster is most certainly the apple of her family’s eye. Raylee is with her today because the child didn’t feel well. She seems fine now, though.

Not only do Anthony and Scott have family support, they have support from community agencies. April Morris of The Arc of Rowan County is a community guide for Anthony, and she’s working on getting services for Scott as well. The Arc provides financial support, advocacy and community resources for special-needs adults.

“We try to get people out and about as much as possible,” she says, to events like the Joy Prom, parades and Y activities. “We really want our clients to be independent and self-motivated.”

Loretta eventually left her work as a teacher’s assistant to care for Anthony and Scott. Now, she works full-time through Bayada with the two as a habilitation technician. Because people with special needs often don’t eat properly, she helps them make out a meal schedule each week with breakfast, lunch, dinner and two snacks. Both Anthony and Scott prepare meals, with supervision.

They go to the grocery store together. They have a certain amount of money each week that they spend for groceries. Loretta helps them compare prices. They pay bills. They go to the Y. They go to the Laundromat, where Anthony and Scott wash, dry and fold their laundry. They clean house.

They also don’t answer the phone unless it’s someone they know. If it sounds as if Loretta is a bit overprotective of the two, it’s with good reason.

Through Bayada, Loretta works with Anthony and Scott on a set of goals. Each has a red binder full of paperwork related to the goals.

“These are all in-home skill building and independent living skills,” Loretta explains.

Anthony is working on money management, eating healthy meals and budgeting. Scott is working on social boundaries and appropriate social behavior such as keeping his hands to himself and not staring at someone for too long.

Anthony has recently opened an account at Kohl’s to build credit. He reminds Loretta often that he needs to pay that bill.

Each has chosen a community activity. Scott has just enrolled in karate, and they both play basketball with Special Olympics, along with softball, bowling and golf. Anthony is also eager to take up tennis. Craig has worked with them on most of these sports.

Anthony and Scott like to spend time together. They’re huge fans of Darrell Harwood, who grew up with Craig, and have attended several of his concerts. On Valentine’s weekend, they were looking forward to attending a dance together. Anthony pulls out his outfit — red shirt, white tie, white pants, black shoes, black hat. Scott has a red shirt and black pants picked out. He wants to get a red hat to go with it.

“We meet every month to talk about where they are,” Stephanie says.

“Obviously, they’re doing very well,” Loretta says of Anthony and Scott. “This is a huge success story. They’ve come a long way in such a short time. It’s been amazing. I’m very proud of them.”

As much as she loves Anthony and Scott, they love her just as much.

“God answered my prayers,” Scott says. “If I had to pick out one person in the world, ain’t nobody can step over her.”

“The greatest of these is love.”

These days, Anthony has another dream.

“The last three years, they’ve been through some rocky times,” he says of Loretta and Craig, and sighs deeply.

“He prays deep about it,” Scott says.

“Every night for the last 2½ years, I’ve been praying one day they’ll get back together,” Anthony says. “That’s what I’ve been praying. I’m telling you, nobody will take Craig’s place. He will always be my number-one brother-in-law.”

“He’s always helped me with them,” Loretta points out. “If I needed him, he always stepped up and helped me.”

And Craig has never missed any of Anthony’s basketball games with Special Olympics.

So … what’s the current relationship status?

“We ain’t gonna talk about that,” Craig says, but he’s smiling.

“We’re kinda not making any decisions about anything,” Loretta says. “But we have decided we’re not gonna see anyone else.”

During the time they spent apart, both saw other people. Loretta was even engaged at one point.

This causes Anthony to laugh loudly.

All this begs the question for Loretta, “What are you doing for Valentine’s Day?”, to which her family replies with a cacophony of whoops and hollers.

“I do not have plans for Valentine’s Day, actually,” she says shyly, and Craig grins again.

“Just put it this way,” he says. “Everybody’s got a babysitter for Saturday night. Everybody’s accounted for.”