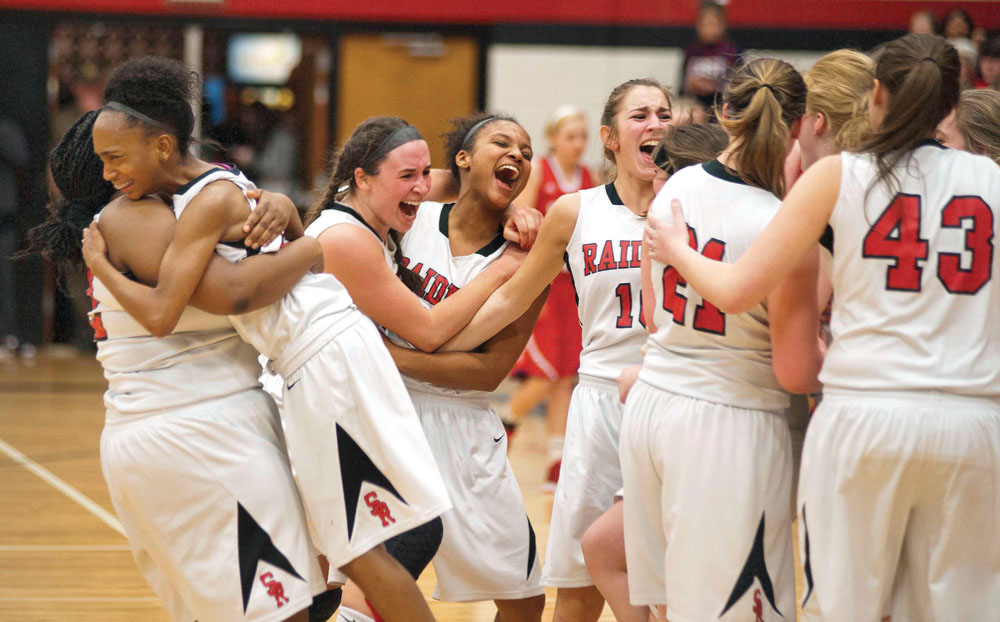 McClendon explained that her grandmother, Shirley McClendon, passed away Thursday, so she was filled with emotion that went well beyond Senior Night and well beyond playing for the South Piedmont Conference regular-season title.

“I wanted to do well for my team in an important game, but even more than that I wanted to make my grandmother proud,” McClendon said. “She would’ve been here tonight to see us play.”

It was the intense struggle everyone expected, and the Mustangs (20-3, 13-3 SPC) were stout defensively, limiting South Rowan’s prolific scoring duo of Cassidy Chipman and Avery Locklear to a combined 22 points. East Rowan’s triangle-and-two, with Jocelyn Lowe on Locklear and Amani Ajayi on Chipman, shut out Locklear in the first half.

“Kayla was on a roll and got us going, and Sylvetta Bost finished it off for us,” said South Rowan coach Jarrod Smith, after the Raiders (17-6, 14-2) captured their first league championship since 1999.

The win was the Raiders’ eighth straight against a team from the SPC since a Jan. 9 loss at East Rowan.

The difference-makers were McClendon with 12 points, Bost with 14 and Malaysia Williams with two big 3-pointers.

“East Rowan always fights hard and they do a good job of trying to take away Avery and Chip because they’re our best scorers,” Bost said. “That means the rest of us have to step up  and make open shots. That’s what a good team does, and that’s what we did tonight. It feels great to be a champion.”

“We didn’t do as good a job of rebounding as we normally do and we a bad start with a lot of fumbles and errant passes,” East Rowan coach Danielle Porter said. “I don’t think we’ve had a five-point first quarter the last two years.”

Shenell Pharr hit three of her four 3-pointers in the first half  and kept the Mustangs in the game. South Rowan led 23-20 at halftime.

The Mustangs got Kelli Fisher (17 points) rolling in the paint in the third quarter. East Rowan caught up and briefly went in front 25-24, but Bost answered with the game’s biggest shot, Locklear got on the board with a 3-pointer, and McClendon buried another one. Suddenly the Raiders were back up by six, and they were on their way.

South Rowan led by as many as 13. Bost clinched victory with five clutch foul shots.

When the horn sounded, the Raiders screamed, hugged and danced, and the student section rushed the floor. It was a win they’ve waited for a long time.

“We had a great season last year but we didn’t hang a banner, and we’ll hang at least one this time,” Smith said. “Watching the girls celebrate, I just felt a lot of happiness for them. They worked very hard to have a moment like that.”