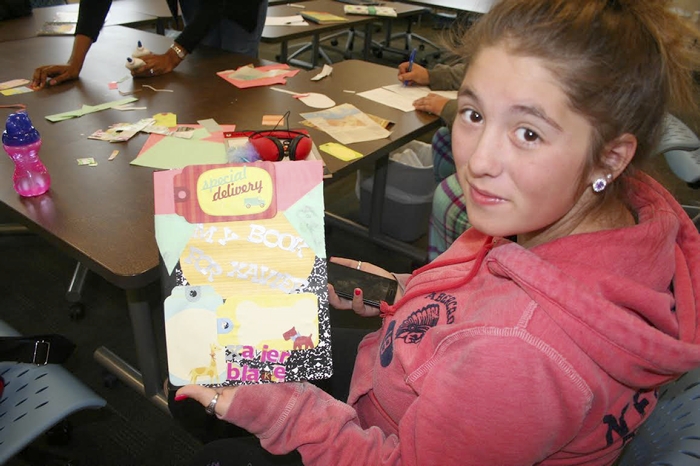 Brianna Hemmings shows of her journal she made in the recent Circle of Parents group for her son, to be named Xavier Blake. Susan Shinn/Smart Start Rowan

Being a parent is hard enough, let alone being a parent — or expecting a child — without a home. Laurels to Smart Start Rowan and Rowan Helping Ministries for teaming up to help those parents. Smart Start Rowan has been offered support groups for several years, but the two agencies are have begun the Circle of Parents group to provide support for guests at the Rowan Helping Ministries shelter, as well as a Spanish-speaking group at Neel Road Baptist Church. Lashonda Houston, who leads the Circle of Parents group here, as well as one in Cabarrus County, said many of the group’s members don’t have family support, “so we build a family unit here. … It brings hope and a lifeline.” For parents or parents-to-be struggling with homelessness, it may truly be just that.

“What’s in a name?” Shakespeare’s Juliet famously asked. A lot, at least to some people. Dart to the argument that erupted this week over the proposed name of the planned Rowan-Salisbury School System central office.  When Lee and Mona Lisa Wallace agreed last year to trade the school system land on North Main Street — where the central office is to be located — for its current administrative offices on North Ellis Street, they also agreed to let the school system continue using the current offices rent-free while the new one is built. In exchange, they asked that new facility bear the Wallace name. It’s a name that’s not uncommon around Salisbury, as the Wallaces have been successful. But that’s the private sector, and this is a government building, so some might chafe at the naming rights, as school board members Dean Hunter and Travis Allen did at a meeting Tuesday. They disagreed with how the agreement with the family came about, they said. Even so, it did come about, before they were elected but decades into an effort to get a central office built. And as school board Chairman Josh Wagner pointed out, in a loose paraphrase of the young-but-wise Juliet, “Is it the end of the world no matter what it’s named?”

Laurels to the organizers of the Rowan-Salisbury Schools Impact Fund. Recognizing that tax dollars alone cannot transform the system into the high-achieving vision of its administrators and educators, community leaders have come together to create the private fund they hope will enable the district to go beyond its basic needs. Philanthropist Fred Stanback has already stepped up with, among other things, a $300,000 gift to provide scholarships for Rowan-Salisbury teachers seeking master’s degrees in science and math fields at Catawba College. But even big givers like Stanback can’t do it all. It will take gifts large and small from people who care about the schools and the Rowan-Salisbury community, because as Impact Fund leader Tippie Miller said, “The future of our community is in the school system.”