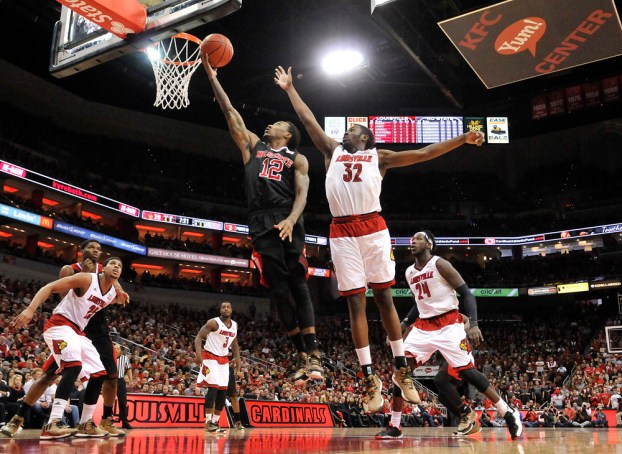 The Associated Press North Carolina State's Anthony "Cat" Barber, left, drives to the basket past the defense of Louisville's Chinanu Onuaku (32) on Saturday in Louisville, Ky.

The Wolfpack held Louisville to 33 percent shooting and dominated near the basket, outscoring the Cardinals 32-16 in the paint, to earn their second win against a top 10 conference opponent. N.C. State beat Duke on Jan. 11 and had lost six of eight since before today’s win.

Terry Rozier and Montrezl Harrell, Louisville’s leading scorers, combined for just 13 points after scoring a total of 50 in Wednesday’s 69-56 win against Pittsburgh.

The Cardinals fell to 78-2 in the last three years when leading at halftime. Louisville led 31-30 at the break.

N.C. State outrebounded Louisville 47-37 with Caleb Martin and Beejay Anya each grabbing 10. Harrell, a preseason All-America, had 13 rebounds but was scoreless in the first half and finished with seven points.

Rozier, the ACC’s leading scorer at 18.5 points a game, finished with a season-low seven points and fouled out with 4:56 to play.

Jones’ steal and layup on the other end pulled Louisville to within 57-52 with 7:06 to play before the Cardinals missed nine straight field goals and lost Rozier to fouls during a five-minute stretch late in the second half.

The Wolfpack led 63-53 at the 4:11 mark and had just 5 turnovers before committing three in 39 seconds to keep Louisville hopes alive.

Blackshear’s jumper with 1:20 left cut the lead to 65-61. Barber found Beejay Anya for a dunk on the next possession and hit seven of eight free throws attempts in the last minute to seal the win.

Louisville: The Cardinals’ last loss when leading at halftime came in last year’s Sweet 16 to eventual national runner-up Kentucky. … Blackshear started after playing only one minute against Pitt with a hip injury. He started strong, hitting two 3s and finishing an 11-point flurry in the first nine minutes with a dunk.

N.C. State: The Wolfpack finished the job at Louisville after their latest tough beat, a 51-47 loss to Virginia. N.C. State has lost four games this season by four or fewer points, second-most in the ACC.