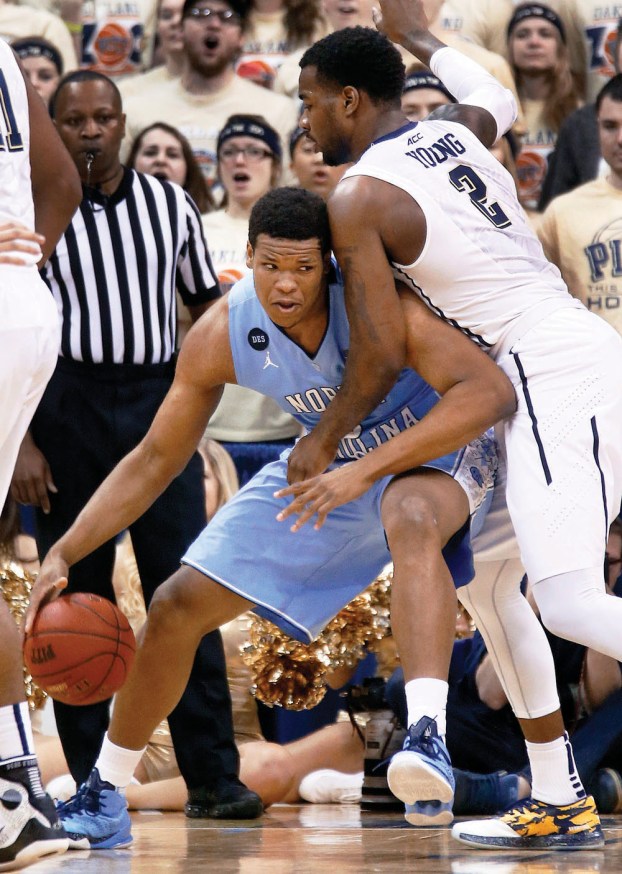 PITTSBURGH (AP) — A handful of Pittsburgh students handed North Carolina coach Roy Williams a condolence card covered in signatures and a lengthy banner highlighting one of program icon Dean Smith’s most famous quotes on Saturday, a way of expressing sympathy and respect following the Hall of Famer’s passing a week ago.

“College athletics is not all bad,” Williams said. “There are some darn good things that happen.”

And plenty of things did on Saturday, just not on the court. At least, not for North Carolina.

Stunned at the start and sagging at the finish, the 12th-ranked Tar Heels put up little resistance in an 89-76 loss to the Panthers. An emotionally draining week that began with Smith’s death and included the murder of a graduate student, his wife and her sister ended with North Carolina’s third loss in its last four games.

“It has been a tough week,” Williams said. “That had nothing to do with the game today. Pittsburgh played fantastic. (Pitt) was so much better prepared than we were.”

It certainly looked like it. The Panthers scored the game’s first 10 points, never trailed and shot 65 percent (37 of 57) from the floor, the highest field goal percentage by a North Carolina opponent in Williams’ 12 years on the bench.

“That was their ‘A’ game,” North Carolina guard Marcus Paige said. “We didn’t bring ours, anywhere close to ours. They needed a big win. They saw this as a great opportunity and took advantage of it.”

Sheldon Jeter scored a career-high 22 points for Pitt (17-9, 6-6 ACC) and Cameron Wright added 15 in his return from a left ankle injury. Six Panthers scored in double figures. Pitt collected 30 assists on 37 field goals, the second most the Tar Heels have allowed in school history.

“You have to give them credit for making shots,” Williams said. “The best team won today … They were so much more aggressive early and so much more positive.”

Brice Johnson led North Carolina with 19 points but the Tar Heels had no answer for Jeter or anybody else wearing white in the Tar Heels’ first game since Smith’s death hours last weekend.

“We were scoring but when they’re not missing a shot, it’s hard,” Johnson said. “We’re a really good rebounding team but if it’s going through the net, there’s nothing you can do about it.”

The Panthers were smarting after a late-game collapse on the road at Louisville on Wednesday. Pitt led by six with 10 minutes to go only to fall by 13. Jeter hinted the Panthers might have been intimidated when the Cardinals and burly forward Montrezl Harrell got serious.

Three days later, Pitt didn’t let it come down to the final minutes. The Panthers built a 14-point halftime lead then hit their first seven shots after the break, with Jeter — a transfer from Vanderbilt who spent the early portion of the season playing sporadically — finding open spaces and knocking down a series of midrange jump shots.

“Our toughness, our manhood got questioned after the Louisville game,” Jeter said. “Tonight we showed how much of men we are.”

Jeter had plenty of help. Pitt made 8 of 15 3-pointers and didn’t allow North Carolina within single digits over the final 22 minutes.

Paige managed just eight points, six below his season average. The junior made just 3 of 11 shots, including 1 of 7 3-pointers. Pitt ran a series of players at Paige in hopes of disrupting his rhythm and it worked.

“I think their team defense is much stronger than our team offense was,” Williams said.

Paige didn’t disagree, pointing out that during a game in which the Tar Heels turned it over just four times they were never really in it.

“We just couldn’t stop them to save my life,” Paige said.

Pitt coach Jamie Dixon had his team back on the floor at noon on Thursday, just nine hours after the Panthers returned from Louisville. Jeter described the workout as short but physical and Dixon stressed that was kind of the point.

“The message was sent,” Dixon said.

North Carolina: The Tar Heels came in second in the country in offensive rebounding percentage and had 12 against the Panthers, but 11 came in the second half, with most of them during garbage time. … Kennedy Meeks added 15 points for North Carolina.

Pitt: Wright led Pitt with 10 assists. … Jeter’s previous career-high came last week when he scored 18 in a win over Syracuse.