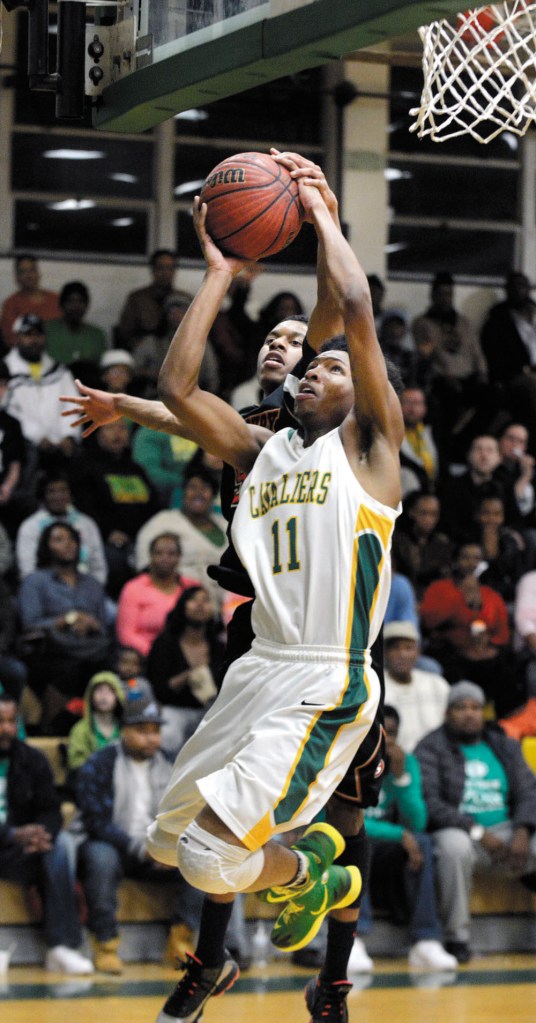 SPENCER — North Rowan opened its treasure chest of a season and dropped in another jewel Friday night.

With two of their top players sidelined and working on personal issues, the Cavaliers outscored visiting Salisbury 67-60 to clinch a share of their sixth straight league title.

The Cavaliers split the title with Lexington. By a draw earlier this week, the Cavaliers will be the No. 1 seed in next week’s Central Carolina Conference tournament.

“There’s a lot of talent here,” fifth-year coach Andrew Mitchell said. “I love this team. We’re not big but we can rebound and play defense. We don’t worry because we shoot enough to find some points.”

Even with point guards Jalen Sanders and Paris Hillie in street clothes, North Rowan (16-5, 9-1 CCC) had enough depth to hold off Salisbury. The Hornets (15-9, 5-5 CCC) settled for third place in the league standings after a poor-shooting second half left them scratching their heads.

“(Sanders) is their best player, for sure,” said Salisbury junior Wes Fazia. “We were confident we’d have a good shot. And we started the game with so much energy, but in the second half we started missing easy ones and weren’t rebounding as well as we should have.”

North Rowan gets a first-round bye in the CCC tournament and will play a second-round game at Lexington on Wednesday. Salisbury hosts East Davidson in Monday night’s opening round.

A terrific first half saw North Rowan jog to its locker room with a 34-33 lead. It stayed close for much of the third quarter and was tied 42-42 after Salisbury’s Tre Oats hit a layup with 2:22 on the clock. North Rowan responded with an assertive 15-0 run that bridged the third and fourth periods, sparked by sophomore Joseph Scott and junior Josh Handy.

“Everything was kind of iffy for a while,” said Handy. “At first Joseph was going crazy and I was messing up. Then coach Mitchell came to the bench and tried to calm me down. I knew it was time for me to step up and be a leader.”

Scott’s performance was most telling. He tossed in 23 points, including 10 during the Cavaliers decisive rally. But instead of singing his own praises, Scott deflected the spotlight to teammate Alexis Archie — the steady senior who quarterbacked the offense in Sanders’ place.

“Alexis Archie was the man,” Scott said. “He did what he had to. We needed to run the ball up and down the court and he got it to us.”

“Joe is one of the nicest kids you’ll meet, on or off the floor,” he said. “He pays attention to all details. We told him we needed him to be something special tonight and he came through.”

Scott’s point total was one shy of his season-best and marked the 12th time he’s reached double digits.

Although there wasn’t a whole lot at stake for Salisbury, coach Jason Causby was disappointed afterward.

“My team is disappointed,” he said. “We played well enough to have a chance in the first half, but we shot so poorly in the second half. They outworked us on the glass, Joe Scott was fantastic. And at the same time they were making plays that we weren’t.”