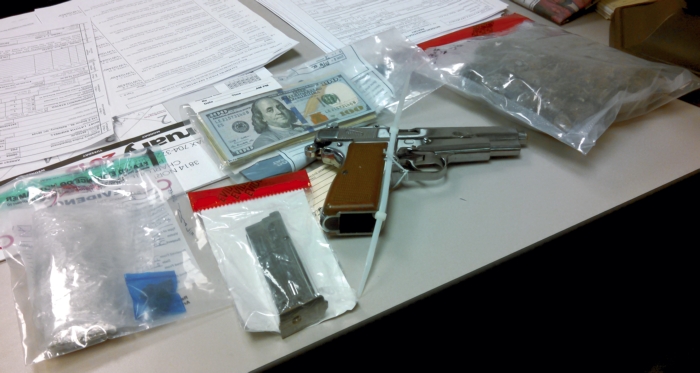 Police seized $618 in cash, 122 grams of marijuana, this BB gun and other items following a drug raid at a home in the 700 block of South Martin Luther King Jr. Avenue. Shavonne Walker/Salisbury Post

Jonathan Toby Hoffler, 26, was charged on Thursday with felony possession with intent to manufacture, sell and deliver a substance schedule VI; misdemeanor possession of drug paraphernalia, and felony sell/deliver within 300 feet of a school.

Police raided the home in the 700 block of South Martin Luther King Jr. Avenue around 12:30 p.m. and seized $618 in cash, 122 grams of hydro-marijuana (hydroponic or water grown), and digital scales. Police also confiscated a BB gun, which police say looks similar to a handgun with a magazine.

Officials said Hoffler tried to run from police out the back door and he was shocked with a Taser.

Police had received complaints that drugs were being sold from the home. Officers conducted a number of undercover drug purchases.

Hoffler has since been released from the Rowan County Detention Center under a $10,000 secured bond.

There are children living in the home, but the children were not home during the time of the raid, investigators said.

Police also conducted a similar raid on South Shaver Street around the same time. Investigators said the marijuana was valued around $1,000.