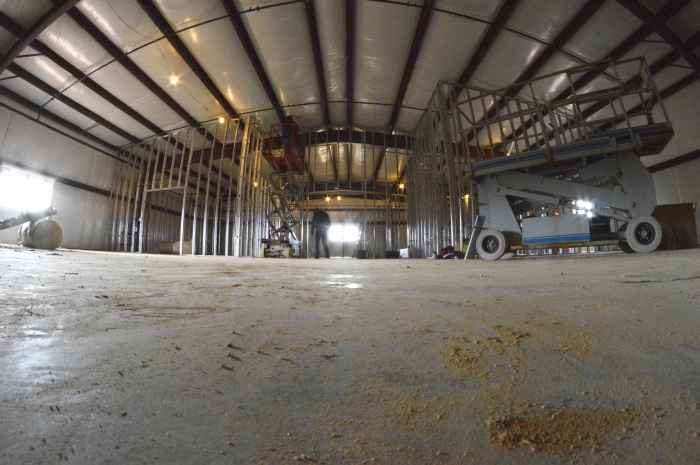 The Fair Association's Event Center, shown under construction in February, will be open soon. Commissioners OK'd leasing the association land for parking for $1 a year.

Construction of a new events center at the Rowan County Fairgrounds is about a month from wrapping up, and rental inquiries are piling up.

Fairgrounds Manager Johnny Love estimated that construction would be complete within 30 days. Installing sewer and water in the building could take a bit longer, Love said.

Regardless of the construction timeline, Love said, the fair is already getting rental inquires.

“We’ve got quite a few calls and already got it booked four or five times,” Love said . “We’ve turned away four events already because it’s not ready.”

The building, which can hold upwards of 400 people, will be used for exhibits during the annual Rowan County Fair, Love said, but can also be rented for events. He used wedding receptions as an example. A company also inquired about using the space for training, Love said.

At its peak, the fairgrounds’ facilities were rented to outside groups 30 or more weekends per year. The number of rentals dropped to single digits at one point, but now averages 20 to 25 per year, according to Love.

Love added that the fairgrounds would also allow alcohol during events that use the events center.

A building permit, issued by the Rowan County Building Code Enforcement Department in early Nov. 2014, puts the site at 9,600 square feet. The permit values the new building addition at $421,000.

In early December, the land for the events center was graded. Now, the building is up. Workers on Thursday were installing electrical components and doing structural work on the building’s interior.

When the permit was issued, the construction time was estimated at four months.

An unnamed benefactor donated funds for the new events center.