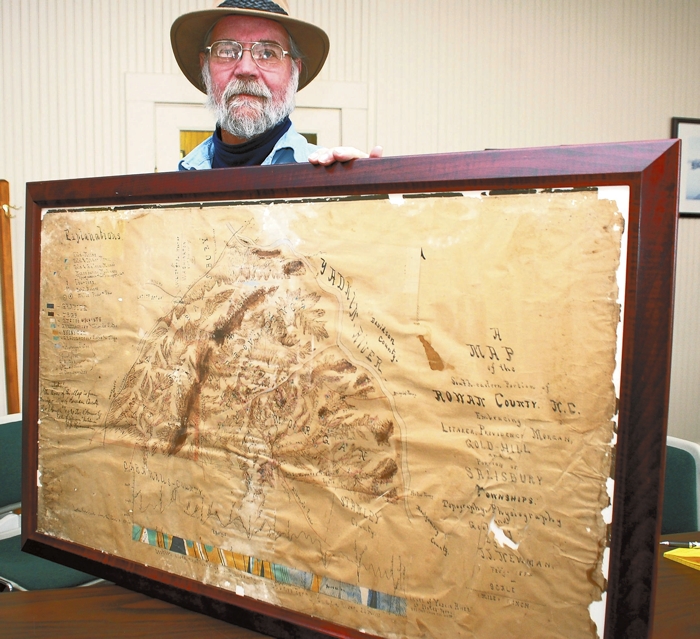 Mark Wineka/Salisbury Post Calvin Welch holds the 1884 map showing locations of gold and copper mines in southeastern Rowan County. Welch has donated the map to the N.C. Division of Archives of History.

SPENCER — Growing up in Union County, Calvin Welch first laid eyes on the map in his grandmother’s attic in the 1950s.

“I think it was between two pieces of cardboard,” he said.

But it took almost 40 years until an aunt passed it down to Welch, who recognized immediately its historic value. After holding a cherished spot on the wall of his house in Midland for many years, Welch officially donated  Thursday — on behalf of the heirs of his grandfather, Robert Lang Welch —  the 1884 map of the southeastern portion of Rowan County to the N.C. Division of Archives and History.

On hand for the informal presentation at the N.C. Transportation Museum were Gold Hill historian Vivian Hopkins and Kevin Cherry, head of the Division of Archives and History.

Cherry, who also is interim director for the transportation museum, said the hand-drawn map is a rare, one-of-a-kind artifact and a treasure for the state collection.

What makes it special is its pinpointing of all the locations of gold, copper and galena (lead) mining operations in Rowan County in 1884, when mining was still a going industry, especially in the Gold Hill section.

At least one mine on the map is one the state wasn’t aware of, Cherry said.

Cherry was fascinated by the large number of saw mills, nodding as Welch explained how important cut lumber was in shoring up the holes and tunnels of the mines, as well as in building derricks and cranes.

Both Cherry and Welch agreed that J.J. (Joseph) Newman, who drew the map, probably used it in his presentations of the Newman mining interests to potential stockholders.

Newman was a younger brother of the infamous Walter George Newman, often described as a flamboyant con artist.

By 1907, the Union Copper mines closed, and all production at Gold Hill ceased. Walter George Newman disappeared, taking with him his investors’ money.

Robert Lang Welch, Calvin’s grandfather, had been an underground engineer for Union Copper in Gold Hill before being promoted near the turn of the century to its general manager.

Robert Welch grew up in Charleston, went to a boarding school in Philadelphia and continued his education in Edinburgh, Scotland, before winding up at the Heidelberg School of the Mines in Germany.

His travels as a mining engineer took him to California before he headed back to the East Coast and eventually Gold Hill. After the Gold Hill mines closed, Robert Welch moved his family to Union County, where he operated a mining venture near today’s Matthews.

So it makes sense that someone such as Robert Welch, who died in 1938, would wind up with the 1884 map drawn by Joseph Newman.

Calvin Welch said others in his family would shy away from the mining business, heeding the advice of his father, Sterling Welch Sr., who often told him and his brothers, “Mining is a fool’s dream in a creek.”

Joseph Newman described his 1884 drawing as “A Map of the Southeastern Portion of Rowan County Embracing Litaker, Providence, Morgan, Gold Hill and a portion of Salisbury Townships. Topography, Physiography and Geology by J.J.Newman.”

He further explained that he had superimposed his map and all of its details on one previously generated by noted Rowan County historian Jethro Rumple. Newman’s map includes an elevation profile of the area and details, with a key for explanation, of rock formations in the area.

Cherry said the Division of Archives and History will make copies of the map for Welch, Gold Hill and the Reed Gold Mine state historic site in Cabarrus County.

“It’s preservation through distribution,” he said.

Interestingly, Welch lives in Midland, which is close to Reed Gold Mine. He had tried,without success, to interest the staff at Reed Gold Mine in his map. But it was about two years ago when Hopkins first learned of the map and recognized its importance to Gold Hill history.

Hopkins is a N.C. “Roads” Scholar, who often makes presentations to groups about mining’s history in the state. She and her husband owned the Montgomery Store in Gold Hill.

“I was astounded,” said Hopkins, who put the map on display during the Gold Hill Founders’ Day.

She also made Cherry aware of the map’s existence and Welch’s willingness to donate it to the state.

Cherry agreed that extra care will have to be given to the original copy.